In which David Bowie is revealed to be a time traveler. 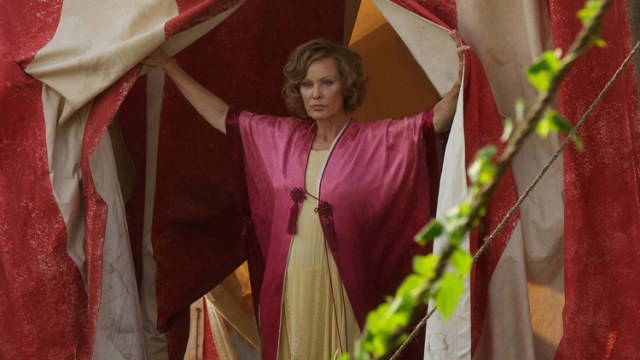 2011. It was a simpler time, at least as far as American Horror Story goes. The then-unproven anthology series kicked off its first season, Murder House, as one might expect—with a couple of hapless kids making their way through an abandoned and obviously haunted house, setting the tone for the brilliant but relatively humble ghost story that followed.

Flash forward to today. The plots of subsequent AHS seasons have exploded in complexity and ambition. You had season 2’s Asylum, which united serial killers, Nazi war criminals, abusive nuns, aliens, and Satan in one decadent masterpiece of evil; and season 3’s Coven, which, while falling far short in the plot and character development departments, imbued its witch mythology with the series’ most elaborate imagery and outlandish characters yet.

So imagine my surprise when season 4, subtitled Freak Show, began with what appeared to be a near-repeat of season 1’s opening scene. This time, the intrepid explorer is a milkman (“I take place in the 1950s,” the show is yelling at you, “and don’t you forget it!”) He passes by a staticky television and a dinner table apparently abandoned mid-meal. The sense of dread increases until he opens a closet and screams, because he’s found…

…something so horrifying that it, after being transported to a hospital, causes a nurse to rush out of the examination room to retch into a trash can. But unlike the malevolent entities in season 1, we soon learn the horror of the house is not our villain but, indeed, our heroes: conjoined twins Bette and Dot Tattler, who share two arms and two legs, and are both played by AHS stalwart Sarah Paulson.

It’s not long before Elsa Mars, a German expat played by AHS über-stalwart Jessica Lange, arrives to convince Bette and Dot to join her freak show troupe. Our first exposure to Elsa is evocative of Cruella De Vil, both for her black-and-white fur coat and her attitude of always getting what she wants no matter what. I’m no expert on German accents, but something seemed rather off about Lange’s dialogue to me. Hopefully the German angle is worth it—and if a reference to having “survived the Stasi” is revisited, it certainly could be.

We’re abruptly transported to a scene of a young couple getting it on in a secluded grassy area surrounded by woods, which everyone who has ever seen a horror movie knows you should never do. They, and we, soon come face-to-face with a clown serial killer, Twisty, far earlier than I expected. Twisty’s grotesque appearance is absurdly over-the-top in every way, like how a boggart would appear to someone with a lifelong case of coulrophobia. Twisty’s presence in this episode felt almost totally unconnected to the freak show storyline. I hope that does not persist very long into the season.

Back to Elsa: It seems she’s obsessed with show business and movies and thinks of herself as a “star” big enough to not pay at diners, despite overwhelming evidence to the contrary. In this diner we’re also introduced to Evan Peters’ character Jimmy Darling, whose fused claw-like fingers allow him to be promoted as a “lobster boy.” They also allow him to run a profitable side gig as a prostitute, since his condition apparently makes his hands God’s perfect fingering tool for unsatisfied housewives. In case you hadn’t noticed by now, this was a startlingly sexual episode even by American Horror Story standards.

Later, a detective shows up at the freak show grounds to arrest Bette and Dot once it’s clear why they were found in an abandoned house: Bette killed their abusive mother (which didn’t feel as shocking as the revelation that Dot subsequently stabbed Bette for doing it). The arrest threat is dispelled quickly, as Jimmy simply cuts the cop’s throat with a switchblade. He saves the twins, he says, because they are “gonna save us”—that is, be the attraction that allows the dying freak show to survive.

A nice sentiment, but I sure hope this isn’t the last time the detective’s murder is addressed—the characters seemed strangely unconcerned with any thoughts of ramifications after the brazen act. Later on a strange kind of funeral is held for him, in which the troupe hacks his body up with knives “for the worms”—apparently this has happened enough times to warrant an established ritual?

The final big sequence of the episode is an all-hands-on-deck theatrical performance the freak show appears to put on nightly, which is attended by a total of two people: Local rich man-child Dandy Mott (Finn Wittrock) and his mother Gloria (Frances Conroy),  with whom he appears to have a disturbingly close relationship. The bizarre sequence sees Elsa singing “Life on Mars” by David Bowie, wearing a light blue suit and heavy blue eye makeup like Bowie did in the song’s 1971 music video. The promo for the rest of the season also showed Dot singing Fiona Apple’s “Criminal,” so I guess musical anachronism is in this season. Well, if “All Along the Watchtower” can be a crucial recurring element in Battlestar Galactica, who am I argue?

When Dandy attempts to “buy” Bette and Dot after the show, he’s rebuffed by Elsa, who receives a brutal diss from the hitherto reserved Gloria: “By far the most freakish thing of all tonight was your pathetic attempt at singing.” Anyone who remembers Conroy’s Coven character (“don’t be a hater, dear”) knows that one way or another she always seems to get the best lines.

The final scene sees Elsa confessing to Ethel why she brought Bette and Dot into the fold: “I didn’t bring them here to save us, I brought them here so people would see me as a star.” This statement introduces a surprisingly unflattering side to Elsa’s character: While she at first seemed invested in providing a life for her marginalized employees, she now appears selfish and severely delusional.

After Ethel leaves, we learn that, despite outward appearances, Elsa in fact has an unusual body herself—she uses prosthetics to hide the fact that she is missing large parts of both her legs. What that revelation means for the character’s history and for the season’s plot remain to be seen.