The Second Episode of American Gods Review | The Mary Sue 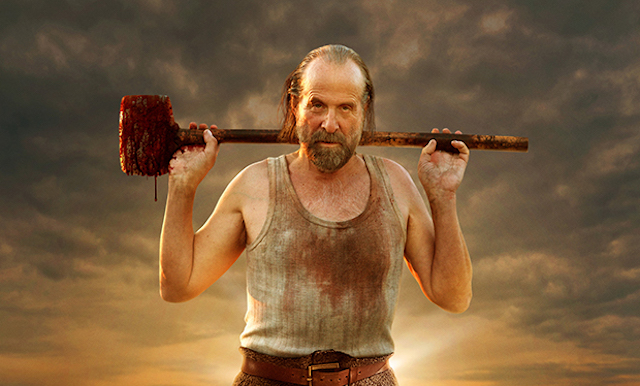 Last night was American Gods‘ second episode, “The Secret of Spoons,” and we met a lot of crucial players. We were introduced to Mr. Nancy in TV’s most fiery scene, saw Gillian Anderson in her fab debut as Media, and learned about Slavic mythology when we feast with the Zorya sisters and of course, Czernobog. This was a packed episode, so let’s get down to the business of unpacking it.

First, there was Shadow boxing up the house he shared with Laura, which he does quickly and efficiently—and furiously, once he makes himself look at Laura’s phone and sees a sext from Robbie, which would appear to confirm that their affair was long-running. Ricky Whittle breaks my damned heart with his stoic-yet-beautifully-tortured face.

Shadow and Mr. Wednesday get the hell out of Indiana, but not before Shadow explores the most American of holy places: a giant Walmart-esque superstore, where he encounters Gillian Anderson’s Media as she takes over the television dressed as Lucy Ricardo from I Love Lucy. I, personally, have been in love with Gillian Anderson since I was 12 years old and even though she only has a few minutes with Shadow, she absolutely kills it. She’s persuasive, seductive and menacing at the same time. I’m putting my money on Media in this whole battle between Gods old and new.

Speaking of old Gods, we encounter some of the most ancient with the Zorya sisters and Czernobog, who in Slavic mythos is termed “the black God” but little is known about what role he played in the pantheon. As such, that opened the door for him to be portrayed as “the God of evil,” per American Gods‘ marketing, but Czernobog as depicted is far more complex—a downtrodden, bitter, wasted god of killing who is kept afloat by his job at a slaughterhouse.

As played by the excellent in every way Peter Stormare, he’s both terrifying and comedic, and exactly as I pictured him when I read Neil Gaiman’s novel. Equally on-point was grand dame Cloris Leachman as Zorya Vechernayaya, the “evening star” guardian goddess. She stole every scene she was in and more than held her own against Ian McShane’s Mr. Wednesday—or Wotan, as Czernobog likes to call him (maybe there weren’t any mythology books in the prison library when Shadow was doing all that reading?). Basically, this whole episode was a masterclass in acting.

We left Shadow having lost his checkers game to Czernobog, who’s ready to bash out his brains come morning. And that, my friends, is how you craft a cliffhanger. So what did you think? Are you still on board the American Gods train, or did the second episode derail you? Tell me in the comments.