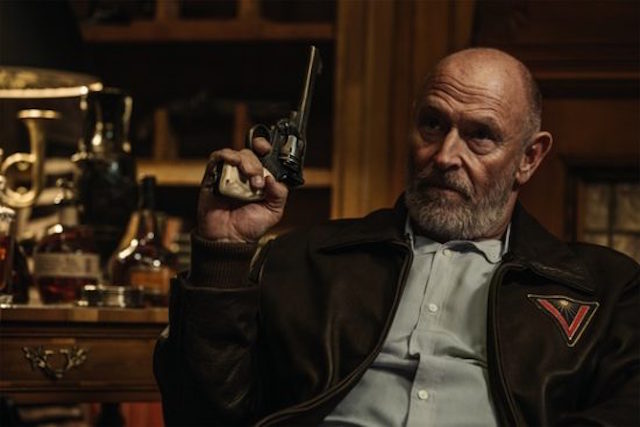 Shadow and Wednesday went to meet Vulcan, ancient God of fire and forging, who these days is devoted to the most American of pursuits—firearms manufacturing and the worship of weapons. Meanwhile, an unlikely roadtrip got rolling.

Spoilers for American Gods episode 6, “A Murder of Gods.”

Wednesday and Shadow got the hell out of dodge (Ohio) after the carnage at the police station, with Wednesday gunning the motor to leave Laura behind. This left Laura to forge (heh) an unlikely alliance with Mad Sweeney, and since they attempted to steal Salim’s taxi, the three ended up deciding to travel together. It’s hard to imagine a more fascinating bunch of traveling companions than a dead woman with superstrength, a surly unlucky leprechaun, and a devoutly Muslim gay man searching for his Jinn lover.

I’m all in for the roadtrippers, which made this episode feel a bit uneven to me—I was actually much more interested in the “B plot,” excited to see what bizarre hijinks Laura, Salim and Mad Sweeney would get up to next. Their odd alliance is also strangely touching, as they reveal more and more about themselves and what has shaped their worldview. Well, Laura and Salim, at least. Mad Sweeney is still a cranky mystery, and I find myself anxiously hoping we get to see his backstory—or at least his “Coming to America” moment. (Since next week’s episode is called “A Prayer for Mad Sweeney,” I might just be getting my wish.)

Speaking of “Coming to America,” this week’s opening scene was brutal. I’d previously posted the teaser where we first meet “Mexican Jesus,” but in the episode we see how the border-crossing ends—in a horrific gunning down of desperate immigrants (likely by self-appointed American border militias) and a new sort of “crucifixion” by firearm for “Mexican Jesus.” I swore out loud while watching this—it was really difficult to see, but is one of the more realistic scenes of modern-day America on a show filled with more fictitious gods and monsters.

The firearm-heavy opening aligned with the “A plot” of Wednesday and Shadow’s visit to Vulcan, the god of fire (played by Corbin Bernsen). Vulcan in America runs an ammunitions factory—and by extension a gun-loving Virginia town—where America’s obsessive worship of gun culture was shown in full effect. The all-white citizenry that we see are all toting guns of every shape and size, down to old women in wheelchairs, and they wear a sort of uniform with a red band that evokes Nazi imagery. The callous—and rich as hell—Vulcan is thriving, and definitely the most successful of the Old gods we’ve seen in America, due to this “franchising” of his worship.

The parts where Vulcan was introduced, the look at America’s entrenched gun culture, and Vulcan’s speech at the end about how every bullet fired in a movie theater is worship directed at him were pretty devastating. I also wonder how non-Americans viewed the episode, no doubt coming away more convinced than ever that our rabid inexplicable lust for firepower has unhinged many in this country.

Overall I thought this was a solid episode, but I’m still more intrigued by the roadtrippers than by the Shadow/Wednesday Gods roundup, which is growing a little thin. Since we only have two more episodes left in this season, things will likely be coming to a head fast.

What’d you think of “A Murder of Gods”?