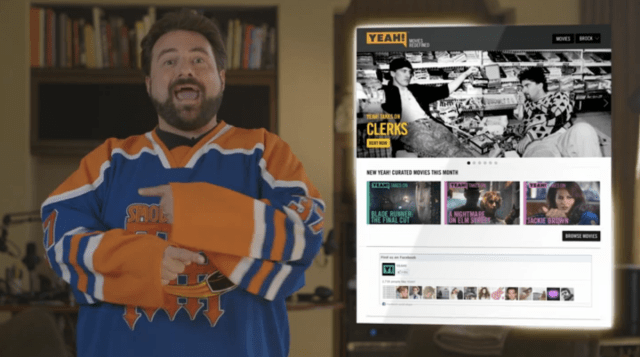 We’ll admit to going into our demo of AMC’s new Yeah! movie rental service at New York Comic Con a little skeptical. There’s no shortage of ways to watch movies online. Do we need another one? Turns out — yes. We do. Yeah! is actually pretty great if you really want to learn more about the movies you love.

Streaming movies online is incredibly convenient, and with services like Netflix and Hulu you have access to more movies than you can ever watch for just a few dollars a month. Seems ideal at first, but physical media still has something online streaming services don’t — bonus features.

DVDs and Blu-rays usually come with more than just the movie. They have behind-the-scenes footage, interviews, commentaries, featurettes, games, and more. As many people leave physical media behind for streaming, those features become a casualty of convenience.

Yeah! wants to change that. The new movie rental service by AMC offers enhanced content versions of movies. They called it “Y-Def” but we’re willing to forgive them the cheesy marketing name because it’s actually pretty incredible.

The exact content varies from film to film, but each movie gets its own research team that works for about two months to build bonus content for the movies. There are interviews, commentaries, polls, trivia questions, and more.

It’s important to note that the features don’t just pop up and crowd the screen, or overtake the audio track. The viewer controls the experience. As you watch the movie you can scroll through content, pause the film to watch a special clip, or hide the bonus content altogether and just enjoy the movie.

They don’t simply pull the features from a DVD or Blu-ray release. AMC is putting boots on the ground to create great original material for the Y-Def (groan) version of movies. The research teams are out doing original interviews and finding new information about the films.

One major drawback to this is that the kind of effort it requires takes time, so there aren’t that many movies available through the service right now. At this time there are 27 enhanced versions of movies. You can rent a lot more movies through Yeah!, but only 27 have the additional content, and that’s really what makes this service worthwhile. They’ll also be adding a new enhanced movie every two weeks or so, so the library will grow steadily over time.

An upside is that of the 27 movies available, there’s almost certainly one you’ll love. They’ve got a great selection including Clerks, Caddyshack, This is Spinal Tap, Sin City, Kill Bill, and The Shining. If you happen to be at New York Comic Con this weekend, stop by the Yeah! booth and check it out. They’re giving out a free rental of their enhanced version of Blade Runner.

The non-enhanced movies you can rent through Yeah! are priced the same way they are on iTunes with most at $1.99. The enhanced versions will run you $4.99. It seems a little high at first compared to $1.99, but we’ve seen the amount of extra content in each of the enhanced versions. It’s worth a few dollars more.

Currently the service only works through the Yeah! site. An iPad app is just waiting on Apple approval, but you can get a preview of it at Comic Con this weekend. There will be versions available for Android, Roku, Xbox and more platforms next year.

Movies are only available as rentals for now, but we were told in the future fans will be able to buy the Y-Def (uuuggggghhhhhhhh) versions. No price was given, but we’re guessing $9.99. This is purely speculation on our part based on how much we’d be willing to pay for bonus content on a movie we probably already own or can stream for free through a service we already pay for.

It doesn’t seem like Yeah! is going to be for everyone, and we don’t imagine a lot of people are going to watch every movie they release in Y-Def (eye roll) but if they happen to have a movie you love on the roster, check it out. Is it worth a $5 rental to listen to a new interview with Kevin Smith talking about Clerks? It is if you love Clerks. (We do.)

We were skeptical at first, but now we’re really looking forward to sitting down to watch the the Y-Def (sigh) version of Blade Runner and will likely be watching a few more of the enhanced versions of movies we love on Yeah!