New Research Claims Women Don’t Get Promotions Because We Don’t Want Them. Yeah, We have Some Thoughts on That 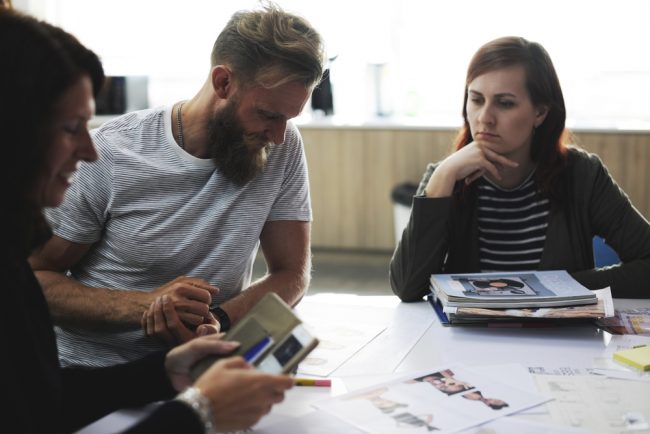 Hey women, good news! A recent article in Scientific American has figured out why you don’t see yourself rising through the professional ranks in the same way your male colleagues seem to be able to: It’s because you don’t want to. Yup, apparently, we should all stop hitting our head on that glass ceiling and just admit we wanted to plaster over it all along.

The article addresses a study by a group of German researchers (a mix of men and women), and adds the author, Francesa Gino’s, own findings to theirs. The study compares the happiness levels of male and female managers and non-managers, presumably across a number of industries, over nearly three decades of questioning. According to the study, “Money and spare time can compensate for this biological difference,” and Gino’s own research finds that there is “a profound and consistent gender gap in people’s core life goals.” According to her findings, when women are presented with the idea of a promotion or other professional advancement, “they find the position to be as attainable as men do, but less desirable.”

“The reason,” as she sees it, “is that [women] see the position generating not only positive outcomes (such as money and prestige) as much as men do, but also negative ones (such as tradeoffs they’ll need to make and time constraints). That’s where men and women differ: in how much they predict these negative outcomes will affect their lives.” She and her colleagues conclude, “The tradeoffs and constraints women predict they’ll experience when reaching high-level positions are related to the fact that, as we find in our work, women have a higher number of life goals as compared to men.”

There’s so much that’s being ignored in this analysis. Let’s start with the most glaring: That German study determined women’s happiness levels by asking them. Rating our own happiness on a scale of 1 to 10 (where male managers averaged a 7.3 and women a 7, while non-managers of both genders average a 7.1) will lead to wildly varying results between women, let alone when comparing answers between genders. I won’t presume that women’s standards of happiness are higher than men, but they’re sure as hell different.

When thinking about or rating our professional happiness, there are so many tangential elements that come into play. Stigmatization of female power, for starters, has to play into how women feel about professional advancement. Gino’s research states that women “perceive power as less desirable” than men, but gives no indication of how that power is perceived by others, and how that image then affects our own perception of power and of ourselves.

Women leaders are viewed, in general, far more negatively than their male counterparts. We don’t need to go into the over-examined bitch vs. boss perception, but yeah, in some ways, leadership positions are going to seem less desirable to a lot of women. That will keep many women off that path, who might otherwise pursue it if all things were equal. Which they’re not. They way they’re perceived (or feel they would be in those roles) could also lower perceived happiness levels, but it doesn’t mean women don’t want these jobs. Having to struggle against harassment, discrimination, and a boys’ club mentality surely plays into many women’s happiness.

Those barriers also, no doubt, create a huge divide between being “presented with the possibility of a promotion” and actually pursuing a promotion. Sure, thinking about a promotion is totally attainable. Actually going through the process of pursuing advancement is a world apart. And no, not all women experience all of these issues in every job, but they’re prevalent enough that to ignore them is a disservice to the study.

And they do flat-out ignore them. The author’s study includes an abstract, stating “Women are underrepresented in most high-level positions in organizations. Though a great deal of research has provided evidence that bias and discrimination give rise to and perpetuate this gender disparity, in the current research we explore another explanation: men and women view professional advancement differently, and their views affect their decisions to climb the corporate ladder (or not).” You cannot explore that explanation without acknowledging specific gendered workplace circumstances. It’s simply not possible.

The author also states women have “a higher number of life goals” than men. That may very well be true. But what about the life burdens? She does mention the added pressures women feel in still, even when working full-time, being the traditional manager of family life. It’s possible, she writes, “that women may worry their partner won’t step up and take over some of the domestic duties—and that such worry is larger for them than for men.” But what of the stigma against working mothers? That even if the women’s partners step up or the family can afford to outsource help, women are judged for “doing it all” in a way that men never are. Would this not play into happiness levels?

Finally, there’s the money issue. Gino posits that “women appreciate spare and flexible time more than men do,” and they need more compensation to sway them to give up some of that free time. This new study concludes that “women find higher levels of pay to be less rewarding than men.” First off, the extra 12,000 euros of pay the study finds it would take “to boost a woman’s life satisfaction” by the same amount that would require an extra 5,000 for a man? That difference should maybe be recalculated to consider the existing wage gap, don’t you think?

Additionally, the stigma aimed at a powerful woman exists in regard to her salary as well, and that can extend to her personal life. A high salary for a lot of women can, even still, be a point of contention for some male partners and potential partners. So many women work full-time, manage the household, and still shy away from or don’t feel the need to be the top earners in their field. Professional ambition and financial ambition have some complicated caveats, ones that it seems weren’t even acknowledged here.

There are, obviously, a lot of reasons why women might not be advancing professionally in the same way we see men do. And while the answer for any number of women might be “they just don’t want to,” to apply that to an entire gender is a ludicrously lazy way of avoiding a deeper look at everything else influencing women’s lives, ambitions, and happiness.