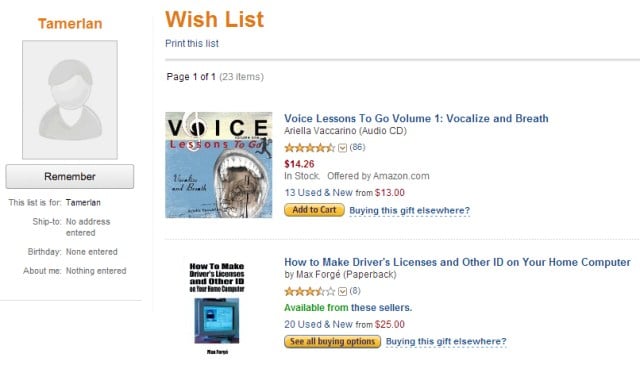 One of the Boston Marathon bombing suspects happens to be named Tamerlan Tsarnaev. He and the other suspect, his brother Dzhokhar Tsarnaev, happen to be “from a Russian region near Chechnya,” as HuffPo describes it. Taking these things into account, the Internet’s picked up an Amazon Wish List from 2006-2007 that’s under the name Tamerlan and happens to include a couple Chechen things. The link is tenuous at best, but if it pans out that this really is Tamerlan Tsarnaev’s list, he made some interesting choices.

Other places that have picked up on this generally focused on the most obviously distressing tidbits, like the fact that the list includes a number of books on organized crime, making fake identification, and Chechnya. That’s all well and good, and telling — assuming this isn’t just some random person’s list. On the other hand, the list also contains some seemingly unrelated odds and ends.

I’m no philosopher, and I’m honestly not sure the Internet would take me more seriously if I were, but this immediately piqued my interest. See, I read The Consolation of Philosophy back in college, and I remembered something about the rejection of false goods and the like. So I dug a little deeper, probing both the Internet and my hazy collegiate memories. Turns out, I wasn’t wrong.

Here’s a little bit about the relevant part of the book, courtesy of GradeSaver:

The goods of the world, explained fully in Book II, are not really “goods” at all. They are simply inferior goods masquerading as decoration on what is the highest good on earth, the intellectual capacity and soul of human beings. This idea of all the so-called goods of the world – even intangible goods like the love of one’s family, or the beauty of Nature – are merely temporal and therefore not able to satisfy the eternal soul, is one of the main “consolations” in the Consolation of Philosophy. The loss [of] anything material or temporal should not be cause of for sorrow, because the only things of value are within yourself and eternal, and can never be taken away.

What does this mean? Nothing, really. It’s all just randomness right now, and there’s the very good chance this isn’t the right Tamerlan. The book also appears on the list’s page for items that were never purchased, so if he ever did read the thing, it wasn’t because he got it through this. Anything else is speculation.

What we do know is this: On June 15th, 2006, Tamerlan — who may or may not have the last name of Tsarnaev — added The Consolation of Philosophy by Boethius to their Amazon Wish List. We also know that the book, as described above, includes sections that boil down to the idea that “[t]he loss [of] anything material or temporal should not be cause of for sorrow, because the only things of value are within yourself and eternal, and can never be taken away.”

Make of that what you will, I guess.