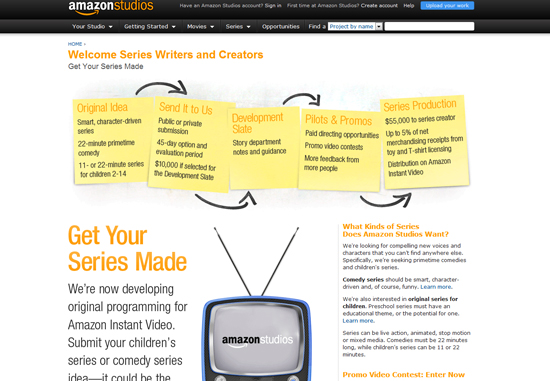 In order to produce their own original content, Amazon has an interesting experiment ongoing with their Series Development Slate. Folks cobble together pilot scripts and mini-bibles for Amazon’s consideration. If they should get picked to further explore their project, they receive $10,000. And now, Amazon’s announced the first four projects that have made the cut: Three comedies and a children’s cartoon. And there’s more to come as more submissions are entered.

The four projects chosen are The 100 Deaths of Mort Grimley, Magic Monkey Billionaire, Doomsday, and Buck Plaidsheep. If nothing else, there’s certainly a peculiar variety of names. As different as the names are, the premises of the group further diverge them from the typical comedy you might find on Fox or NBC. Here they are listed in order from Amazon’s website:

The 100 Deaths of Mort Grimley

A man kills himself, then is forced to become an avatar of Hell, with the duty to get a special list of 100 people to commit suicide in his stead, or else be damned to spend all of eternity next to his cruel, smothering mother.

When their magician owner dies after winning the lottery, Rabbit and Monkey are shocked to learn that he left his money to happy moron Monkey and donated evil genius Rabbit to a 2nd grade class. In each episode, Rabbit hatches a plan to steal Monkey’s billions.

A mockumentary about the supposed end of the world.

Buck PlaidSheep, The courageous critter from Fleecy farm, who’ll face any danger and solve any problem. Armed with a variety of vehicles, Whether it be a jet pack, rowboat, hang glider or even a jeep, He always has the best vehicle to get the job done.

Granted, “a mockumentary about the supposed end of the world” isn’t much to go on. Luckily, all of the pilot scripts and mini-bibles are available for download. And if you fancy that you have a primetime comedy idea then you can submit your own pilots for consideration. Who knows? Maybe you could be the next lucky dog to get $10,000 for that show you always wanted to do. Excuse me while I begin writing my own pitch.