The Good Omens Series May, in Fact, Be Too Accurate and Nice | The Mary Sue

The Good Omens Series May, in Fact, Be Too Accurate and Nice 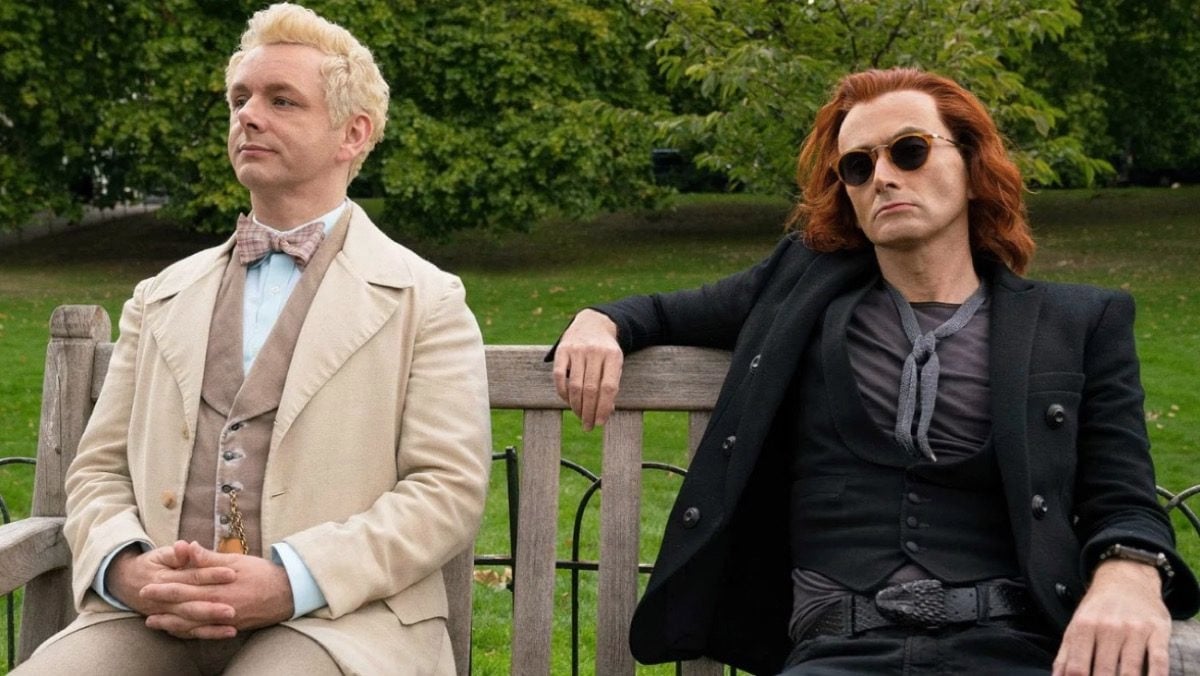 Good Omens, the book by Neil Gaiman and Terry Pratchett, is fun, sparkling, and witty. It changed our culture in ways that wouldn’t be evident for years after its release in 1990 and remains a classic to scores of fans. Yet, Good Omens the Amazon Prime limited series is … kind of a bore—or at least it was to me.

I know, I know; it’s very popular in some circles of fandom right now, mainly due to the performances and chemistry of the two male leads, but as a fully realized series? It could barely hold my attention, and it made me start to wonder: How can something that was so funny, refreshing, and subversive in book form be such a slog onscreen? What transformed from page to Prime? I think the answer is that the world changed, and Good Omens did not.

First off, a disclaimer before you send the hate mail: This is all simply my opinion, and I’m not here to troll or tell anyone they’re wrong if they enjoyed this show. It didn’t work for me personally, and the reasons why speak to a larger cultural question.

I won’t dispute that Good Omens is a loving and faithful adaptation of the book. The show was helmed by Neil Gaiman himself and is a love letter to the late Terry Pratchett. Every little detail from the original novel is there, much to the delight of avid fans and close readers. However, as fun as all the Easter eggs are, that reverence stands in the way of the series being truly great. In one way, there’s too much onscreen, with not a single character or plot altered or omitted, even when they’re boring (sorry, Witchfinders).

The visual style is rote and uninspired, and the pacing often drags. With so much focus on telling all of the story, there’s no attention paid to doing it in an interesting way. In its attempt to honor the novel, there’s very little that’s new about Good Omens, and that’s something that a book written in 1990 desperately needs.

Good Omens was a direct parody of uber-dark ’70s and ’80s horror, such as The Omen or Rosemary’s Baby. It took on religion and the horror of the devil with wit and absurdity, and at the time, that was quite cheeky. Back then, it was funny and subversive in and of itself to make the end of the world a comedy, but then other creators did the same thing, very likely influenced by Good Omens. From Buffy telling her watcher to beep her if the apocalypse comes to a stripper angel saving Jesus’s descendant in Dogma, the ’90s were full of irreverent takes on horror, faith, and the end of days.

By the time the 2000s rolled around, Good Omens’ anarchic silliness and refusal to take even the devil seriously and was part of the DNA of most genre shows. Supernatural, with its meta commentary and irreverence for angels and devils alike, wouldn’t exist without Good Omens. For hell’s sake, there’s a major character named Crowley. The same goes for all the series Supernatural and Buffy influenced. From The Magicians to Wynonna Earp to Gaiman’s other devil, Lucifer, Satan with a side of sarcasm is commonplace. The fact that so many movies and shows owe some of their sensibility to Good Omens means that there was a lot of Good Omens that audiences had already seen before a single frame of the actual adaptation was shot.

This sense of having seen all of this before, and Good Omens’ failure to land with me, made me consider the nature of comedy in general. There’s an oft misattributed quote along the lines of “humor is like a frog: you can dissect it, but it dies in the process.” Asking why something is funny, or why it isn’t funny, is often a fool’s errand, but I have to do it here.

Comedy, more than any other genre, thrives on novelty. Humor relies on expectations being subverted, on power structures being upended in ways we don’t expect. Shrek was funny when it came out because most audiences had ever seen such a self-aware, ironic take on fairytales. Now, every animated film is self-aware and self-referential, and as a result, Shrek is dated and stale in its humor.

The same goes for Good Omens; those things that made the book so funny and fun are nearly thirty years old and have become so ubiquitous for some of us that Good Omens is no longer the absurd outlier, but the norm. For instance: Satanic Nuns were funny just on their own in 1990, but when The Chilling Adventures of Sabrina devotes its entire series to deconstructing the devil’s church as an allegory for patriarchy … there needs to be more for the joke to work to this audience. 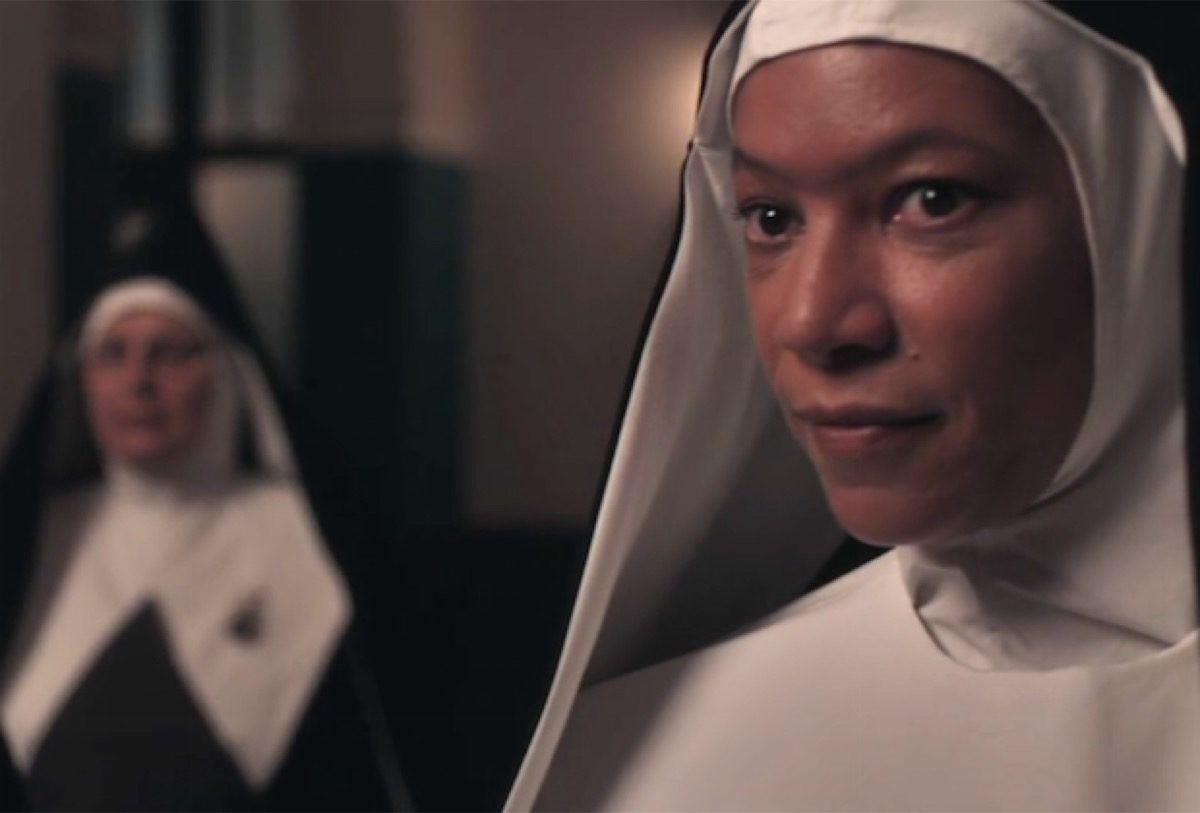 This problem of subversion becoming regressive as culture evolves and changes is an old joke of its own. Many things that were revolutionary at the time are unsurprising and even banal to modern eyes, and this problem isn’t just confined to humor: The violence of The Godfather seems quaint nowadays. The once-magical effects of Jason and the Argonauts are cheesy now. But they were astonishing in the time and are great works of their time.

New works and new adaptations need to build on those foundations, not repeat them. Apples to Apples is boring once you play Cards Against Humanity, and even that game stops being as funny once you’ve played all the cards in your deck. That’s why there are expansions packs, and that’s what Good Omens needed, in my opinion, to not be a DOA museum piece. And it’s not just the jokes show their age.

Here’s another aspect of Good Omens that’s become part of the discourse: queer representation. The question, for many fans, is if the demon Crowley (David Tennant) and the angel Aziraphale (Michael Sheen) are in love and if that counts as representation. The short answers are: yes … but no. There’s clearly love between these guys, but it’s not explicitly romantic, or even explicitly queer.

It’s not shocking to anyone that follows fandom that people are shipping the two conventionally attractive, white male-presenting characters and ignoring the rest of the show around them to focus on that relationship. That’s just what shippers do. Neil Gaiman has been wonderfully supportive of fanfiction and headcanons about these “ineffable husbands” (and so has Michael Sheen on more than one occasion), but even he has pointed out that they are of indeterminate, ethereal gender and the nature of their love is similarly up for interpretation.

All of this is fine, but it’s a type of subtextual “representation” that was the norm from the ’90s until recent years—the kind that was at home in shows like Xena or Sherlock—that’s becoming increasingly outdated as more and more actually queer and gender-diverse characters show up onscreen. It’s not that the lack of something more explicit between these characters is bad for the story in a vacuum, but it’s just another helping of something we’ve already seen.

But perhaps that’s why there are so many fans responding to it. Good Omens is a sure bet; it has all the elements fans love in a new package and nothing more—like ordering your favorite sandwich at a different restaurant—and I admire what the creators of Good Omens wanted to do with this adaptation. It’s a monument to Terry Pratchett, built with care and love.

It’s a testament to his humor and creativity, but it’s also a testament to how hard adaptation can be. Things that work in one medium might not work in another—think about The Producers, a brilliant Broadway show that was faithfully adapted into a stiflingly boring Hollywood movie. It’s not enough to copy a novel into a screenplay; a new medium necessitates a new perspective. Making art is hard, and nothing can please everyone. Humor especially is difficulty, both to create and to dissect. What makes something funny for one person could read as completely predictable to someone else. It’s all mysterious, really.

Perhaps we could even call it … ineffable.

A few years back, when it was initially announced that Good Omens was finally being adapted for the screen, I was ecstatic. I loved the book when I first read it. I’d given copies to friends and still smiled when I remembered little details, but somewhere in the mix, my enthusiasm hit a snag. As production ramped up and casting was announced, I was interested and excited by David Tennant and Michael Sheen because it felt like a good, logical choice … but it also felt safe.

Even so, I continued to follow the production as it happened on social media. Each picture and still was like something directly from the book … and with each one, I became less and less enthusiastic, and I couldn’t place why. Yet, by the time Good Omens was available to stream, even with all the hype and promotion, I had to force myself to watch it … and once I did, it was a disappointing slog.