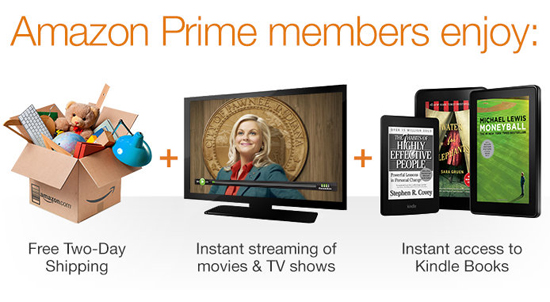 Amazon‘s really wanting to bolster their Amazon Prime subscriptions, apparently. The annual subscription, which runs $79, wasn’t cutting it for them. If you’re the type of person that regularly purchases items from the online retailer, the annual account’s worth it for the free two-day delivery alone. In addition to that, Amazon Prime also offers a collection of television shows and films that subscribers can watch, like Netflix. Also like Netflix, Amazon Prime’s just added a $7.99 monthly plan. That means streaming plus all the other goodies associated with an Amazon Prime account for the same price as just streaming elsewhere.

Not only does that Amazon Prime membership offer the unlimited streaming and free two-day delivery, but it includes the Kindle Owners’ Lending Library if that’s your thing. That’s all the extra little goodies, though, which only applies if people actually order junk from the site or own a Kindle. If they don’t do either, the formerly annual-only subscription isn’t exactly a winning proposition.

$7.99 a month to stream video is exactly the same plan offered by Netflix and Hulu Plus, though. At this point, it’s just a matter of preference. None of the options currently available truly outweigh the others. The streaming library for each is still in flux, though Netflix remains top dog in a lot of ways, and none of the competitors have a truly excellent user interface.

Amazon Prime does have Fringe, though. So, there’s that.