Amazon Key Will Let Couriers Inside Your Home and Yeah, We Have Some Questions 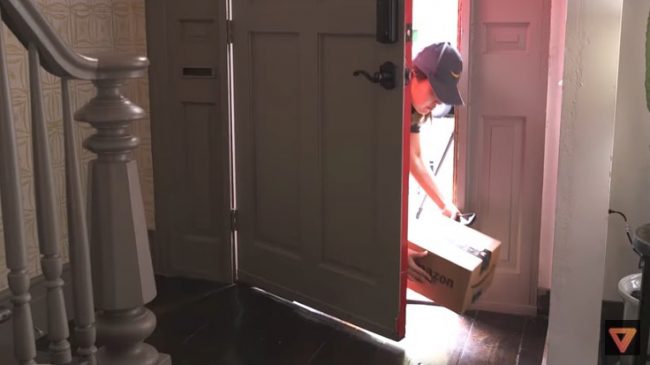 Amazon has announced the launch of a new service called Amazon Key, which lets their couriers unlock your door and leave packages inside your home. If you have a recurring problem with packages being stolen off your doorstep, this might sound great. If you have concerns about … pretty much anything else, this probably feels like a pretty easy pass. Concerns like, say, your physical safety.

*tomorrow*
A string of murders have been linked to Amazon Key.https://t.co/hNMibEOqbA

All you Black Amazon delivery drivers, don't let Amazon Key get you caught up. Leave the packages on the porch https://t.co/nCX9cAGPC8

I get how this benefits Amazon as a company. I do not fully understand what they thought the public reaction would be. I would be also really interested to know how many women were in on this pitch meeting and development process.

I can't imagine there were a lot of women (or perhaps any) on the team that came up with Amazon Key. Good lord.

Or people of color.

Ostensibly, we’re supposed to feel safer, I assume, by the full service Amazon has developed, which isn’t as simple as giving Amazon a copy of your keys. Instead, you pay them $250 for a new smart lock that communicates with a “Cloud Cam.” The courier uses the camera to scan a barcode, which sends a request to the cloud to unlock the door. I suppose the camera is also meant to prevent any misconduct on the part of the couriers, but does anyone–especially any woman–actually trust any amount of corporate-designed safeguards to protect us when letting strangers into our private space? Uber assaults immediately spring to mind. So does hacking. So do a few other issues that are currently being widely discussed by people demanding more accountability in the tech industry.

On top of that, did anyone ask the couriers how they felt about this idea?

Yes, Amazon Key sounds like a terrible idea because I wouldn't let people in my house, but I also wouldn't want to be the delivery person.

Amazon is banking on its customers putting a lot of trust in the company. And while people will sacrifice a lot for the sake of convenience, this feels next level. And it’s not just the physical intimacy of letting strangers have access to your home. It’s all the other things we ignore when we just want next-day cat litter delivery.

@Amazon Key? I wouldn't let a Breitbart employee into my house, so I'm gonna pass on letting its biggest advertiser in too.

Amazon has been edging their way into our homes for a while. And many of us have been willing to ignore what that actually means on a practical level. We’ll ignore being eavesdropped on 24/7 because Alexa is just so damn convenient. But a physical presence in our homes might make it harder to ignore those potentially evil and exploitative corporate dealings.

Amazon, the company that put a microphone in your kitchen, now wants to be able to open your front door. https://t.co/P158YanhgQ pic.twitter.com/iFKjJS832B

Given the online reaction to Amazon Key, have they found the line of invasiveness that customers just won’t cross? Or do you think customers will forget their reservations in favor of convenience? What are your thoughts? Just remember, Amazon is watching.