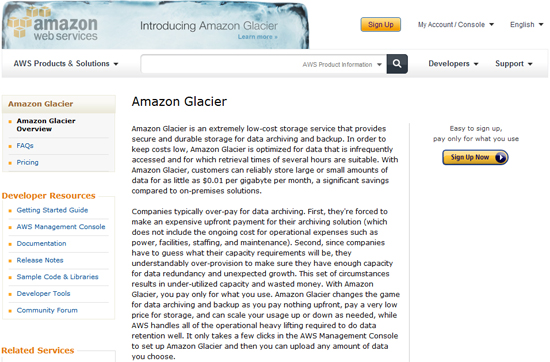 Data archiving and backup storage can be an expensive proposition. Nobody wants to lose those thousands of files they’ve spent time compiling, especially not corporations, but current methods of storage tend to either cost an exorbitant amount or fail to provide the right services. That’s where Amazon is looking to fill a niche. In order to better serve the archiving and backup needs of the many, they have launched Amazon Glacier.

They probably should have picked a better name, however. The talking points include how durable the service is, how simple it is to use, and how secure it is. The name “Glacier” is obviously meant to invoke all of these things, and yet the actual glaciers are melting. Nothing’s quite as simple as a big chunk of ice, though, so they got that part right at least.

The service mentions how big corporations often overpay in order to ensure they have enough space when they do their backups and archiving. This is because they make a payment before being able to use the service and have to estimate exactly how much storage they’re going to need rather than paying only for what they require. Amazon Glacier hopes to quell these issues.

The service is provided for as low as $0.01 per gigabyte per month. In theory, one could store a single gigabyte for 10 years for $1.20. It’s not without drawbacks, though: Obtaining the data could take 3.5 to 4.5 hours — which is still not bad for an archive. Relying on the cloud for storage is a sketchy proposition — in that you’re relying in someone else to keep your data safe — but having an extra storage space just in case on the cheap couldn’t hurt.