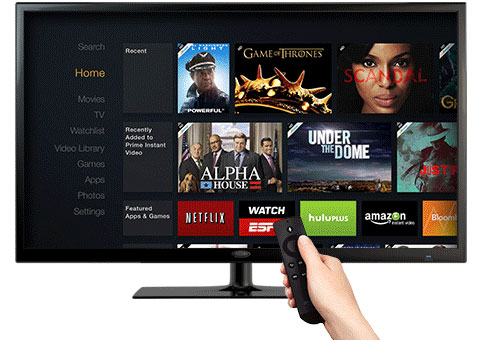 Amazon got into the set-top box game today with a competitor for Roku and and Apple TV in the form of Amazon Fire. They’re at a disadvantage with being comparatively late in the game, but Amazon is aiming to build on the shortcomings of those other offerings with its new box, and they’re shipping today.

Apple and Roku may have a slight advantage in terms of install base, but Amazon’s already got a lot of loyal customers already using their streaming services, so they just might be able to pull this off if they don’t go full Sega Saturn. That, of course, is when you announce a launch date for your product that is the same date you make that announcement. Luckily for Amazon, tech gadgets can get away with that better than incredibly expensive video game consoles.

The Amazon box comes in at a pretty standard price of $99, so it’s right in line with the competition. Where they intend to draw a distinction is in capitalizing on things the other boxes do poorly. Their three-pronged attack focuses on poor search functionality, slow apps and performance issues, and the closed ecosystems of their adversaries.

So, pretty much everything about them.

The Fire operates on Android, so it’s about as open as you can get. Right now, it comes with apps familiar to those with other set-top boxes like Netflix, Pandora, Hulu Plus, but it’s missing some others like HBO Go, although it’s a good bet that it—and more—will be added in the future. Its tech specs put it at about three times the speed of the others, as well, so it looks like Apple’s got some catching up to do, which they’re no doubt planning with their fabled entry into actual TV sets.

It’s also a game console that can be played with either the tiny stock remote or a separate controller that you can pick up for $40. Amazon says there are over 1,000 free games already available, and the price of the paid games averages out to a bit less than two dollars, so that’s pretty good. Here’s a list from Kotaku of some games you can already play on your brand new Fire.

It’s also got a voice search feature, but those always work way better on stage than in practice, so we’ll hold off on whether or not that’s a draw. Plus, maybe you don’t want everyone to hear your sad binge-watching habits as you ask it to play you a new episode every 44 minutes. Your love of Dawson’s Creek is a private matter.

(via Gizmodo, image via Amazon)