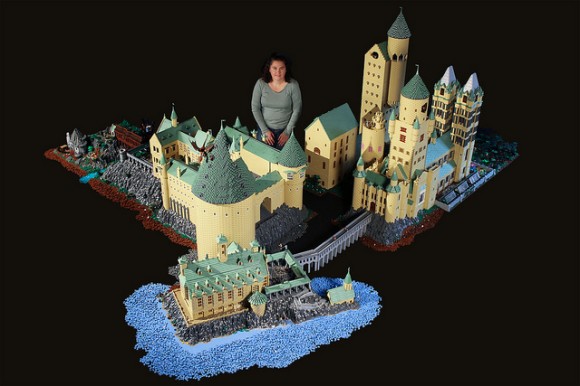 What’s most remarkable about the model is not even that it’s so large (13 feet on a side and involving around 400,00 bricks) but the loving attention to detail that’s been lavished on it, from the pile of pink cups in the Astronomy classroom, to the floating candles in the Great Hall, and the Grey Lady somberly standing alone on a balcony.

It all started with Alice Finch, mom of two, realized that she still loved building with Legos, and not just because it meant spending quality, creative time with her kids. Or maybe it started when she became frustrated with one-sided official Harry Potter Lego sets that were less than accurate. Or maybe it was when she completed her minifig-scale model of the Great Hall, and decided that she just had to do more. In any case, it has ended with her model winning the rare combination of both the People’s Choice and Best in Show awards at BrickCon 2012 this year. BrickCon was in October of last year, and it’s taken this long to reassemble it in a proper space for photography (thanks in part to another master builder) and get the pictures online.

I started building about 5 years ago when I was spending a lot of time with my older son in our Lego room. He was doing the building; I was doing the sorting and putting away. After a while, I realized that I really wanted to build too. I haven’t built since I was a kid and once I started building again, it occurred to me that building with my son had important implications. We were spending time together doing something creative, learning techniques and sharing ideas in a very productive way, and, although I didn’t really think about it at the time, I was showing him that moms can be pretty darn good at putting bricks together too.

We’ve thrown some pictures of the incredible model into a gallery below, but there are seventy five at Finch’s Flickr account here.

(The Brothers Brick via Tipster Dvorah.)