Alexandria Ocasio-Cortez' Instagram Stories Are a Joy | The Mary Sue

Alexandria Ocasio-Cortez Is the Anti-Donald Trump of Social Media 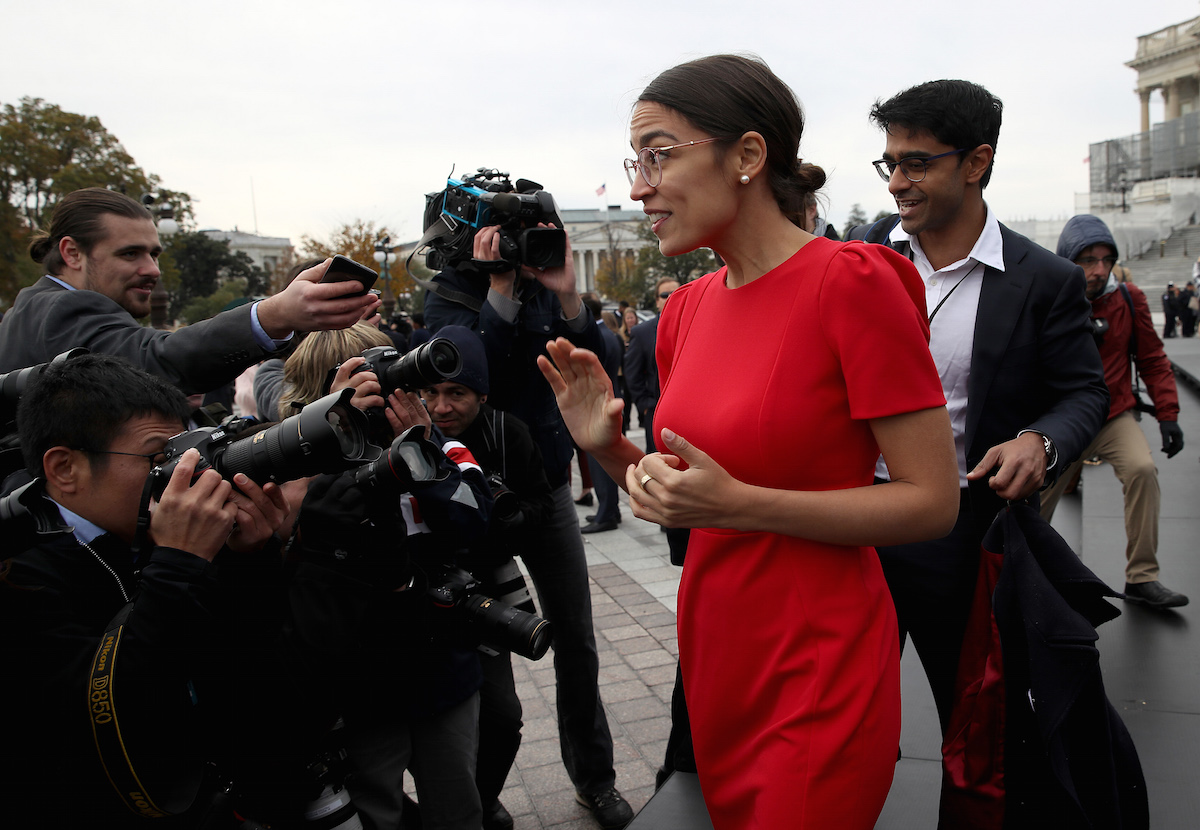 For that last few years, Donald Trump has arguably loomed supreme as the politician who had most effectively harnessed the power of social media. Even if you believe what he’s tweeting is inane, dangerous, rambling, nonsensical drivel, you can’t deny that he succeeds in motivating his base and dominating any and all conversations.

Now, though, Alexandria Ocasio-Cortez, the youngest person ever elected to the House of Representatives, is using social media as an effective tool to have direct and honest conversations with voters and all Americans. But while Trump uses his platform to insult and aggressively attack any perceived opposition, Ocasio-Cortez is using her social media accounts to reach out and forge genuine, if mass, connections.

While she is prolific on Twitter, the representative-elect’s most impressive use of social media has to be her Instagram stories. She’s taken to shooting regular live feeds of herself making dinner while talking about policy issues. It’s an incredibly human display of the care she feels for her constituents.

This is how you talk politics at the dinner table. I wish more politicians were real like this. pic.twitter.com/vlxoKAAKse

mac n cheese in every instant pot and a candid conversation about why crushing student loans prevent many young people from owning of a car, never mind a garage https://t.co/Eq0EFl308R

Most politicians spend their evenings having expensive dinners with rich donors. @Ocasio2018 spends her evening cooking with her donors, which are just regular people like me, a truck driver who just wants someone to represent my interests in DC. 🔥🔥🔥🔥🔥🔥

I am completely absorbed by @Ocasio2018‘s live story on Instagram right now. She’s cooking dinner, answering questions, and talking policy. Something is happening here that we haven’t quite seen before in politics…

It’s saturday night but @Ocasio2018 is spending her evening in sweats on a zoom answering questions from @justicedems activists to take them through the green deal. Not your grandmother’s congress is an understatement. pic.twitter.com/Duy3oJNv6I

Last week, Ocasio-Cortez and the other incoming freshman representatives went to Washington D.C. for what she dubbed “Congress Camp.” And in between all the classes and meetings and sneaking away to do laundry, she found time to document the experience for her followers. Her Instagram story on this orientation is a total joy to watch, as she doesn’t try to hide her excitement over her situation (she compares the Hill rotunda to Hogwarts and gushes over the “secret” tunnels connecting government buildings) and breaks down the logistics of what exactly happens after you’re elected to Congress.

In these recent midterm elections, the political landscape underwent a huge shift. More women, more young people, more people of color ran for office than ever before. And the work that Ocasio-Cortez is doing to demystify these higher levels of government is an effort to make sure that wasn’t a one-time occurrence. She’s lifting the veil on an institution that can seem entirely untouchable by those not born into a family or community that already has access to that world established. 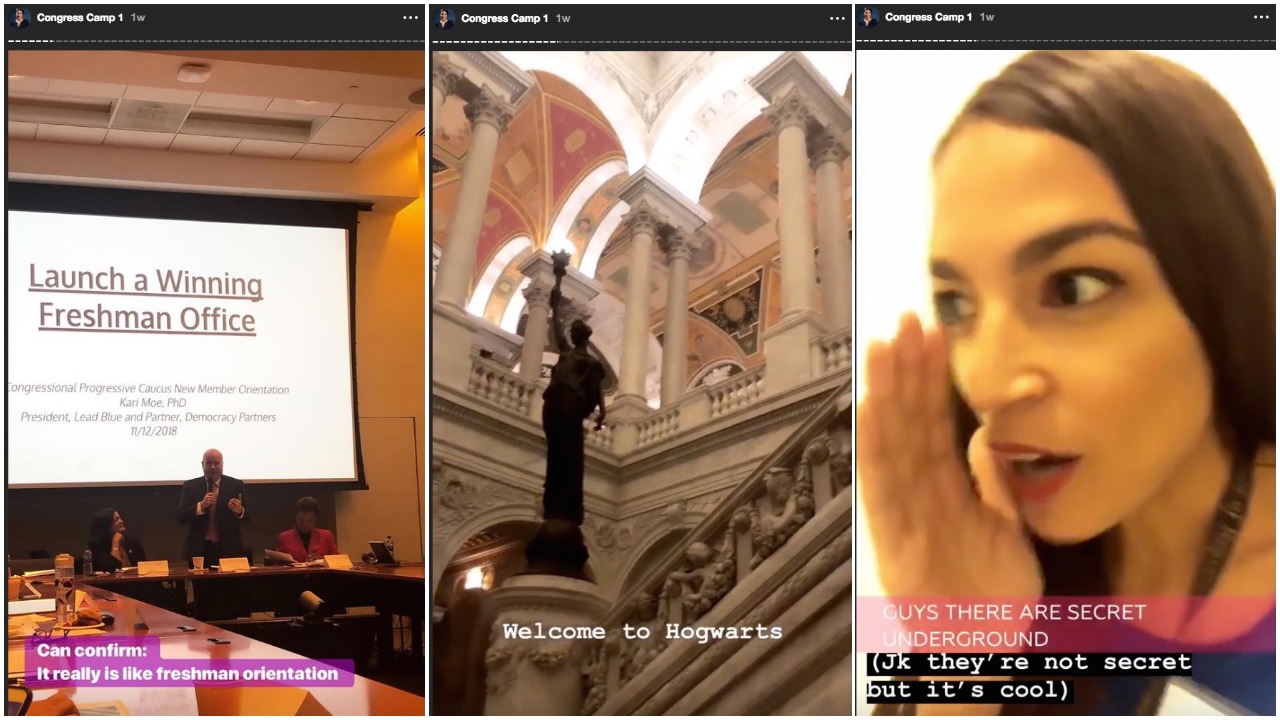 As you might expect, a lot of establishment figures in that world have been trying to tear these efforts. They pick apart her clothing choices and they dwell on semantic slip-ups she makes during candid these candid and impromptu videos. (She accidentally spoke of the “chambers” of government when she meant to say branches, and by the reaction from the right, you would think that was grounds for impeachment before she even officially takes office.)

Ocasio-Cortez is standing up to those criticisms. She’s hitting back with both solid roasts and direct callouts of the motivations and hypocrisy driving these attacks.

Now that’s *TWO* fallen GOP Vice Pres candidates going after a freshman Congresswoman that’s not even sworn in yet.

Isn’t it a little early to be bringing out the big guns?

Especially when they look like the FWD:RE:FWD:WATCH THIS grandpa emails from the ‘08 election they lost https://t.co/TijjLgJ0MI

Cognitive dissonance is Republican commentators stalking, doctoring, + editing my casual livestreams out of context in order to sow doubt in my intelligence, all while blindly supporting a man who thinks our greatest defense against forest fires is: A Rakehttps://t.co/RsfyPT6rGy

Maybe instead of Republicans drooling over every minute of footage of me in slow-mo, waiting to chop up word slips that I correct in real-tomd, they actually step up enough to make the argument they want to make:

that they don’t believe people deserve a right to healthcare. https://t.co/fMOijEa7tF

Because when it comes down to it, she knows what this is really about.

The actual fear driving the attacks on my clothes, my checking account, my rent, isn’t that these folks are scared that I shouldn’t represent people in Congress.

It’s fear that they’ve allowed their riches, their privilege, + their bias to put them to a point where they can’t.

And she’s not going to let that stop her from doing her job and from making sure her constituents feel seen.