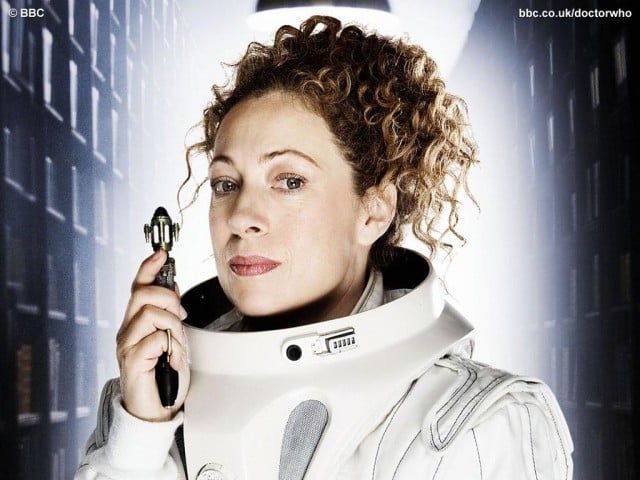 Love her or not, River Song is an important character in the life of our favorite time-and-space-traveling Madman in a Box. So it would make sense for her to return for an interaction with another one of The Doctor’s faces on Doctor Who. Well, Alex Kingston seems to think that there’s a strong possibility that River will interact with Capaldi’s Doctor!

During an appearance at Mega-Con, Kingston spoke about the possibilities of returning to the show, and brought up an interesting – and dare I say…fannish? – theory about why she thinks this could happen. According to Blastr:

Alex Kingston has hinted that River Song could return alongside Peter Capaldi’s Twelfth Doctor. “All I can say is … spoilers! But what I will say is the sonic screwdriver that I had in “Silence in the Library,” which had been given to me by the Doctor, is not the sonic screwdriver that has been seen … yet.” Girl’s got a point there! The screwdriver we saw was a modified version of the one the Tenth Doctor (David Tennant) used, and we have yet to see our Time Lord show up at her door with a new suit and a new haircut and give it to her. The screwdriver, that is.

Kingston added, “I haven’t been told I’m done [on the show].” And if she were to meet Capaldi’s Doctor? How would she react to him? “Well, River’s dealt with a lot of Doctor’s faces in the past, so I don’t think that it would be a surprise to her.”

I know that there are plenty of people out there who are sick of River Song. And you know what? I, too, hope they wait a bit before bringing her back. I think she, like the Daleks, needs a bit of a rest.  However, I think that despite some writing problems during Seasons 6 and 7 of the show, River Song remains one of Steven Moffat’s best creations. She’s an older woman who loves adventures and doesn’t apologize for being brash, or sexy, or sad and hurt. She’s exactly the kind of female character we should be encouraging on television – a nuanced one. Oh, and she’s part Time Lord (sort of) and we haven’t really gotten into that much.

What do you think about a potential return of River Song? Do you think it should happen? And how?