This might be as close to the pony's mouth as Zazzle will let us get. 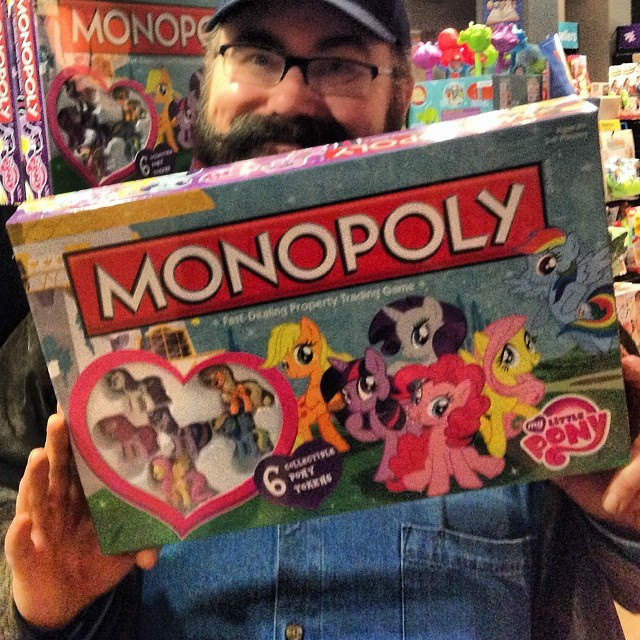 Yesterday we reported on a possible legal issue surrounding the use of the word “brony” in fan-made merchandise. Judging from correspondence between Zazzle and blogger Mandomommy, it appeared Hasbro might be trying to assert intellectual property rights over some of the content made by My Little Pony‘s adult fans. To provide more context and clear up any confusion surrounding her interactions with Zazzle, Alesia Stein, i.e. Mandomommy herself, sent us an e-mail update:

On May 23, 2014 I received 263 emails from Zazzle claiming that an equal number of my products that I had listed for sale on their site had been found to be [in] conflict with one or more of their “acceptable content guidelines”.  Their email included this statement:

Since none of these products contained copyrighted or trademark materials I contacted them asking for more information.

I received from them the following reply:

“In this instance, the products contained search tags or descriptions that references ‘brony’.”

Both of these facts you have featured in your coverage.

What you do not know and did not cover is this.

On May 27, 2014 I wrote Zazzle Content Management another email.  In this email I requested more information regarding the IP claim.  I specifically asked who claimed to be the IP holder and for proof that this claim was made.

Zazzle chose not to reply to my request for more information.

This led me to believe that the error was most likely on their part and that an actual “IP Claim” was never made.

Since all 263 emails I received originally were worded the exact same way, I concluded that most likely this was a form letter they sent out anytime they decided, legitimate claim made or not, that a product “may” infringe on a copyright or trademark.

It was this fact, and none other, that made me decide to remove all my products from Zazzle. I did not want to deal with a company that I felt was willing to lie or exaggerate a situation to enforce their own policies.

When they neglected to offer proof of an actual IP claim, I had to assume the problem was with them and not actually with Hasbro.

I did not bring these facts out publicly because the whole situation had already blown up into something much larger than I intended.  My initial intention in revealing to the fandom what happened to me, was to warn other fandom content creators to be careful using the term “brony” because of what happened to me.

Unfortunately, Zazzle has yet to come out publicly to say what exactly has happened.  This allows people to assume Hasbro has made an IP claim when one can equally assume Zazzle has lied about such a claim.

An attempt to interview all parties involved should have been made prior to publishing only those points that were made public.

Stein also included an e-mail she sent Zazzle requesting clarification, to which she never received a response. 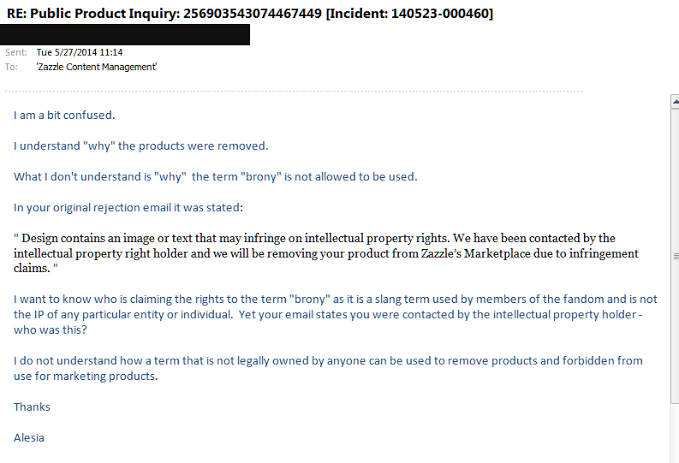 Since Zazzle never replied, Stein told us she assumes any concerns over a possible intellectual property claim did not originate with Hasbro, which might be a relief for fans. If you’ve a vested interest in the residents of Equestria, cross your hooves that’s correct, I guess.