Weird Al to Guest Star on My Little Pony

Bronies everywhere give each other brohoofs. 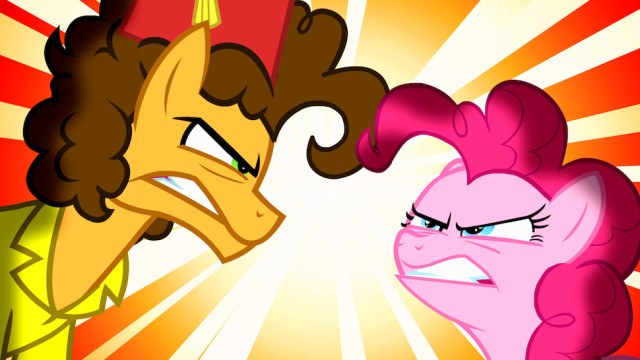 This Saturday, Twitter will be responsible for the collaboration no one could have predicted but we’ve all subconsciously been craving. Weird Al will be one of the first ever guest voice actors on My Little Pony: Friendship Is Magic—as a party-planning pony named Cheese Sandwich.

Here’s the synopsis for Saturday’s episode from USA Today:

An elated Pinkie Pie is planning the biggest and best birthday party ever for Rainbow Dash, but when a strange new party planning pony named Cheese Sandwich rides into town, plans change. Soon, everyone is so excited about Cheese Sandwich’s party that they forget about Pinkie Pie, causing her to question her own talents and abilities; however, Pinkie Pie’s pride won’t let her go down without an amazing, daring duel.

A birthday party planned by Weird Al? Yes please, no matter how distracting his accordion skills are.

Saturday’s episode won’t be the first time that Yankovic has been linked to the citizens of Ponyville. After Weird Al fans began setting show clips to his songs, My little Pony‘s co-executive producer Jayson Thiessen tweeted Yankovic to ask if he would ever consider guest starring.

Thiessen says the episode contains “a lot of great songs,” and admits there’s a possibility Cheese Sandwich could return, depending on the response Yankovic receives.

Even if this is the last time Weird Al appears on the show, it’s fair to assume that the presence of a 55 year old man will at least give My Little Pony fetishists pause. Or maybe not, we’re too alarmed by that particular part of the internet to know specifics. We swear.

Here’s a clip of this weekend’s episode, just in case you can’t face waking up at 10:3o to watch a show about a pony named Pinkie Pie, but still want to see a pony with an accordion on its butt.