Nothing but respect for our ginger nerd prince. Alan Tudyk has joined the cast of DC Universe’s upcoming animated series Harley Quinn, where he will be voicing The Joker. The nerd culture mainstay joins The Big Bang Theory‘s Kaley Cuoco, who is set to voice Harley and Diedrich Bader who will play Batman. This is Tudyk’s second role in the DC Universe, as he has also signed up to play Eric Morden/Mr. Nobody in the upcoming Doom Patrol series.

Tudyk’s casting is yet another in a long line of iconic genre performances that has made him one of our most beloved character actors. Let’s take a look back at the top five Alan Tudyk performances, shall we?

One of Tudyk’s first roles was in the 2000 Sandra Bullock rehab dramedy 28 Days, where he played the German recovering addict Gerhardt. Gerhardt was frequently the film’s comic relief, but never at the expense of the character’s queerness. Tudyk delivers a hilarious yet heartfelt performance, and his monologue about forks in the road is an instant classic.

Tucker, Tucker and Dale vs Evil

This 2010 horror comedy takes the “killer redneck in the woods” horror trope and turns it on its head to hilarious effect. Tudyk plays one half of the hillbilly duo (Tyler Labine stars as Dale) as they unwittingly find themselves in a case of mistaken identity with a group of camping teens. The one-joke premise delivers a film with plenty of laughs, scares, and a surprisingly heartfelt bromance between Tudyk and Labine.

Tudyk’s deadpan K-2SO is welcome comic relief in one of the darkest entries in the Star Wars franchise. The reprogrammed Imperial security droid provides crucial back-up to the team, as well as some droll wit to cut the tension. The biggest disappointment of Rogue One? That K-2SO will never get his own trilogy. 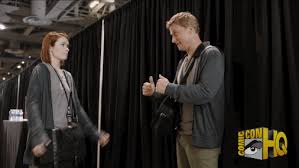 Tudyk wrote, directed and starred in Con Man, a comedy web series based on his time doing the comic convention circuit. The two season series follows Nerely, a struggling actor whose supporting role on a cult classic sci-fi series has relegated him to con fame, as opposed to the show’s star Jack Moore (Nathan Fillion at his Fillion-est) has gone on to be a movie star. The cast is stacked with genre favorites and playfully pokes fun at the world of geekdom and Tudyk’s most famous role.

Tudyk’s performance as Wash, the goofy pilot of the good ship Serenity in Firefly, was a heartfelt addition to Joss Whedon’s ragtag crew of smugglers. Tudyk and co-star Gina Torres, who played his wife Zoe, are one of the all-time greatest sci-fi couples. Wash was never threatened by Zoe’s strength and bravery, and remained a supportive and devoted husband no matter what the ‘verse threw at them. Tudyk’s warm portrayal of the pilot made it all the more heartbreaking when the character died in Serenity. He was, after all, a leaf on the wind.