The Alan Moore Interview You Have to Read 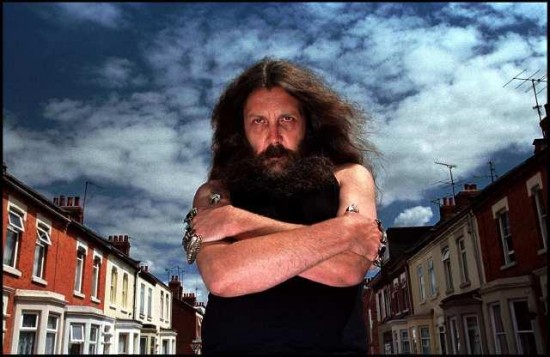 Alan Moore no longer pays any heed to superheroes. In an interview with British music newspaper The Stool Pigeon recently, the creator of the watershed comic Watchmen spoke about the works which made him an international superstar in the comics industry. Despite his stature, Moore is a noted recluse and has insisted strongly on distancing himself from the numerous film adaptations of his work (From Hell, The League of Extraordinary Gentlemen, Constantine, V for Vendetta, and Watchmen), which have all fallen short of the nuanced originals.

The eccentric writer has now also distanced himself, apparently, from the comic book superhero, “[suspecting] that a lot of superheroes now are basically about the unfair fight.” We’ve collected just a few of his particularly interesting quotes, including his thoughts on the Internet, the iconic Guy Fawkes mask showing up at protests, and real-life superheroes:

“I’m practically Amish when it comes down to it. I practically mistrust any technology that came after the buggy. What I tend to think is that the internet is fine for everyone else in the world. I can see that it may have some disadvantages. In fact, I can see a few problems arising from it, but, by and large… everybody in the entire world apart from me uses the internet and seems to get on quite well with it. For my part, I don’t want to be connected to that all-pervasive kind of cyber culture any more than I want to be connected to the physical world that is around me, more than I can help it [laughs]. I’m largely a solitary creature, just by nature and by my work.”

On the protesters dressed as V during the G20 demonstrations

“There are an interesting number of people turning up at protests these days dressed as V. I know there is the Anonymous Group down the bottom of Tottenham Court Road barracking the scientologists [who sometimes adopt his disguise]… a good bunch of lads and lasses! But I’ve also seen some pictures recently from the Climate Change Summits and the anti-globalisation demos and there appears to be a growing phalanx of people wearing Guy Fawkes masks and wigs.”

On superheroes in real-life

I’m interested in the superhero in real life, but not the comic book version. I’ve had some distancing thoughts about them recently. I’ve come to the conclusion that what superheroes might be — in their current incarnation, at least — is a symbol of American reluctance to involve themselves in any kind of conflict without massive tactical superiority. I think this is the same whether you have the advantage of carpet bombing from altitude or if you come from the planet Krypton as a baby and have increased powers in Earth’s lower gravity. That’s not what superheroes meant to me when I was a kid. To me, they represented a wellspring of the imagination. Superman had a dog in a cape! He had a city in a bottle! It was wonderful stuff for a seven-year-old boy to think about. But I suspect that a lot of superheroes now are basically about the unfair fight. You know: people wouldn’t bully me if I could turn into the Hulk.”

Read the rest of the fantastic interview at The Stool Pigeon.