Directors of Aladdin Confirm A Fan Theory, Deny Others

Yeah, about that whole "take off your clothes" thing... 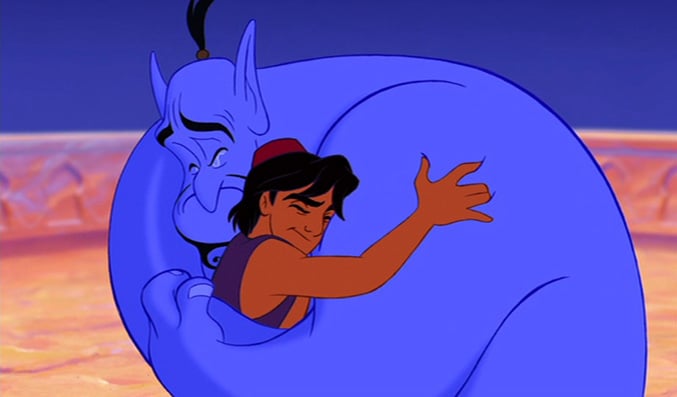 There’s been some neat Aladdin stuff in the news recently, from the deleted Genie scenes to Kane and Salonga singing “A Whole New World” for the new Diamond Edition Blu-ray release of the animated film.

Directors Ron Clement and John Musker went on E! to discuss some legends about the film. They confirmed that the peddler at the beginning of the film is, in fact, Genie:

I saw something that speculates that the peddler at the beginning of Aladdin is the Genie. That’s true! That was the whole intention, originally. We even had that at the end of the movie, where he would reveal himself to be the Genie, and of course Robin did the voice of the peddler. Just through story changes and some editing, we lost the reveal at the end. So, that’s an urban legend that actually is true.

They did however, debunk myths that Aladdin was a post-apocalytpic world, and the whole “take off your clothes” thing. Also, as much as we love to try and put Disney movies in the same universe, Aladdin and Jasmine didn’t have a cameo in Hercules. Musker calls most of the theories that try to connect Frozen with other movies “fan fiction.”