Aisha Tyler Speaks Out About Harassment and Women in Gaming 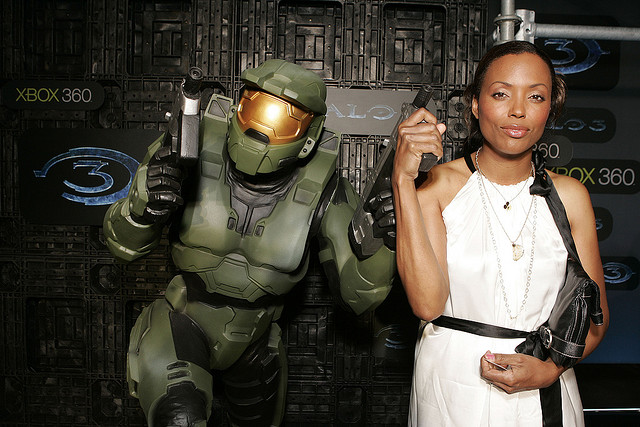 While the main focus of Monday night’s Paley Center panel was discussing the ways in which women in STEM fields could be better represented on television, that didn’t mean the video gaming industry didn’t also come up in conversation as well. As a gamer herself and frequent host of Ubisoft’s E3 press conference, actor and comedian Aisha Tyler had a lot to say on how women fit into the community, both as players and as characters.

Citing a recent study that claimed 70% of female gamers would rather play as male gamers than deal with harassment, panel moderator and Girls Who Code founder Reshma Saujani asked Tyler how the hostile aspects of gaming culture—such as Gamergate, which she noted has been in the news a lot lately—can be improved. Tyler’s response was fairly simple: we already are improving it, simply by making our presence known and showing those in charge of creating that we want better representation. As a result, the “last five years have been extraordinary” when it comes to depicting female characters, and it’s only going to get better. She said:

One of the things is— we’re already doing what we should be doing, is that women are playing. The reason I got into the gaming community was that I as a gamer. I loved games. I wasn’t doing it to be cute or to get press, I’ve been playing games since I was a little kid. […]  I will always love that world, and I think that’s what gamers share is a love of gaming. That is a pure connection that we all have in common regardless of our gender, age or ethnicity.

I don’t actually play online, or at least I don’t play online with a headset on, because I don’t want to hear what people are saying. But it’s not just misogynist; it’s racist, it’s every kind of -ist. It’s all the Youtube comments said out loud, that’s what you’re hearing. So I don’t play online for that reason, but women are playing more games, and women are falling in love with this world, and so we’re changing it just by being there. Why we’re having this conversation is that there’s an aspect of that community that feels threatened. There’s always been a pushback. Whenever you diversify, the minority gets louder because they’re feel afraid of their world changing. But it is changing, and it’s going to change.

We’re also human beings, and you know, these games are narrative and they’re objective and those things are happening, too. We beat up on the gaming community a lot, especially programmers and people who are writing these games, for not writing strong women. They are doing it, and they will continue to do it if we demand it. But I personally think as important as it is to have feminist critique of gaming culture, this is a moneymaking business and they move where the dollars are. So just buy games that have awesome women in them—and they do exist—and just ask for them and they’ll write them.

It’s hard for me, because I feel like people really want me to be like, [in a whiny voice] “yeah, you know, there are a lot less women in games!” But if you play a game where you can build an avater, you can play a female character anyway, and in most games you can build an avatar. These worlds are already there, so women should be voting with their dollars—and also if you’re a parent, you should be encouraging your kid to play games that have strong female characters that are there.

Later in the discussion Tyler also brought up a story she heard on public radio about how playing video games at an early age causes kids to be more interested in computer science when they get older, and how Minecraft in particular is drawing an exceptional number girls because of its focus on creation and world-building. “The more girls that play Minecraft,” she noted, “the more girls get really curious about how these worlds work and how they’re composed.”

“The moral of my story is that everyone should play more video games all the time!” she laughed. “That’s a way in. So don’t discourage your child from playing games, because it makes them naturally curious about computer science.”