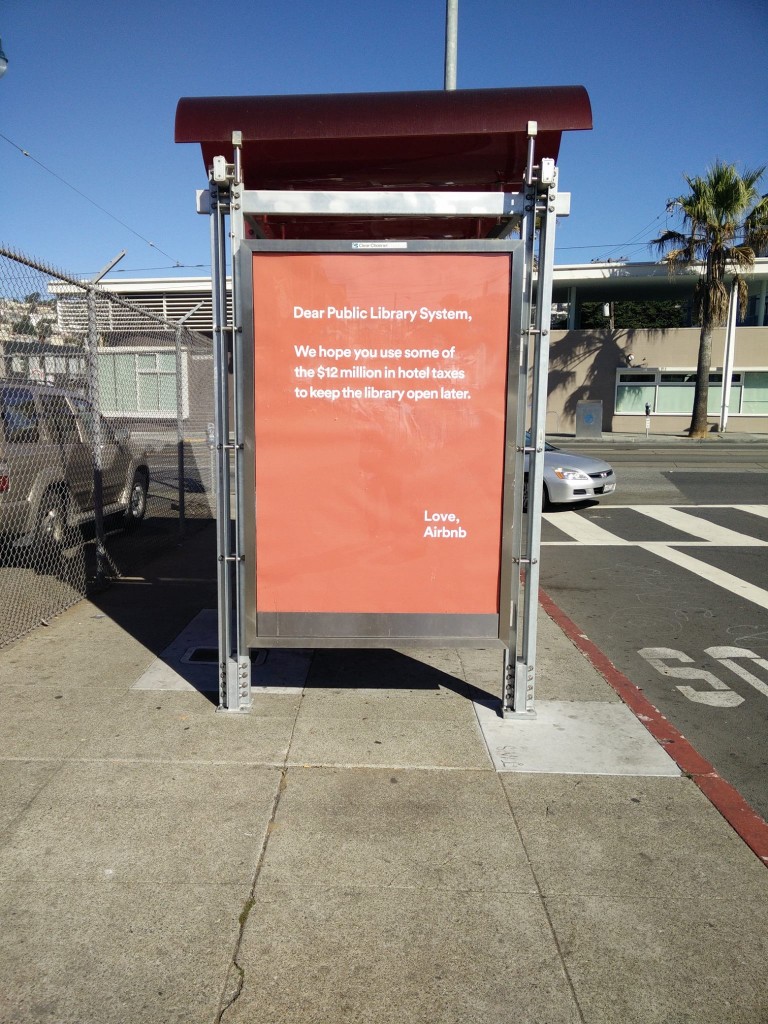 Over the past week, a series of terrible passive-aggressive ads have shown up on San Francisco’s bus shelters, all signed “Love, Airbnb.” They appear to be calling out the city’s publicly-funded services such as the public library, the bus system, and the department of public works.

Some context: San Francisco is currently set to vote on Proposition F, which places restrictions on private short-term housing rentals. In other words, it pretty much targets Airbnb’s entire premise, which is to allow people to rent housing on a short-term basis, usually for vacations. If passed, vacation rentals like these would be limited to only 75 nights a year–a major loss for Airbnb.

Thus far, Airbnb has sunk about $8 million into a counter-campaign, and these ads are the latest attack. They’re all riffing on the same idea: that the $12 million collected by the city in hotel taxes isn’t actually going to the city’s public services. It’s a passive-aggressive swipe trying to call into question where the money’s going, and coming from a huge company that was afforded tax breaks out the butt, it’s super off base.

It’s also important to note that Airbnb only started paying taxes this year.

The reaction from San Franciscans was swift. Martha Kenney, assistant professor at San Francisco State University, posted a picture of one of the ads to Facebook, with a comment saying:

I’m happy to hear that you paid your taxes this year. I did too! Isn’t it awesome? However, I’ve crunched some numbers and I have some bad news for you. Out of your $12 mil of hotel tax, only 1.4% percent goes to the SF Public Libraries. So that’s $168,000. Divided by the 868 library staff, we have $193 per person. Assuming each employee works 5 days per week minus holidays, this is $0.78 per employee per day. Since that’s significantly under San Francisco minimum wage ($12.25/hr), I doubt that your hotel tax can keep the libraries open more than a minute or two later.

However, had you donated that $8 million you spent fighting Proposition F directly to the public libraries you love so much, that could have made a bigger difference. Oh well. Hindsight is 20/20!

What’s more interesting is Airbnb’s reaction to questions from the media. When SF Weekly’s Julia Carrie Wong (who originally broke the news) wrote in to Airbnb to ask if the ads were real (because let’s face it, this is San Francisco, culture jamming is a real possibility), she got some interesting responses in return. She wrote:

We emailed Airbnb spokesman Christopher Nulty to ask whether the library ad was “real.” He responded by email, “as opposed to a fake one :)”

A follow up email, explaining that we were in fact seeking confirmation as to whether the ads are actually from Airbnb received the following response: “Are you seriously writing on this?”

Nulty did not respond to another follow up email.

Airbnb’s antagonistic campaign comes at an incredibly sensitive time. The city is growing increasingly hostile to people who don’t happen to make a tech salary, and affordable housing is at an all-time low. Developers are almost always incentivized to build smaller, higher-end housing units as opposed to builing for density. The fight to remain in San Francisco is a tough one for anybody who makes less than six figures, and given Airbnb’s entire premise of tenants renting out empty apartments for exorbitant rates makes them a bit of a bully, to be honest.

There are plenty of perfectly fine apartments sitting empty–all because they’re waiting to be rented on Airbnb.

Do you see the problem with that?

As of this writing, Airbnb has apologized for the ads, and has promised to take them down.