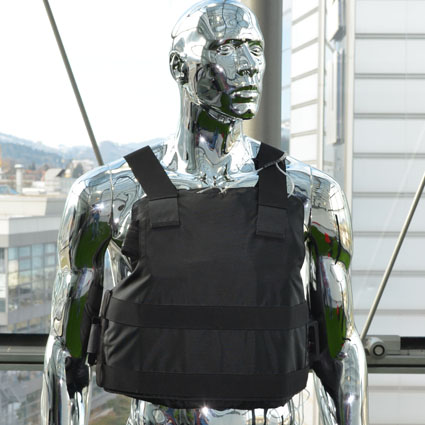 It goes without saying that being shot at can be, well, uncomfortable. For one thing, you’re being shot at, but if you’re wearing a bulletproof vest, you’re likely to be quite hot and sweaty. Sure, it definitely beats having metal projectiles pierce your fleshy torso, but being hot and sweaty (and consequently dehydrated) is a problem that soldiers and police everywhere face. A very viable solution to this is a new kind of completely portable, air-conditioned bulletproof vest. It’s a lot less frivolous than it sounds.

Armor that doesn’t inhibit its wearer is, of course, an important military concern. As such, there are systems where soldiers in vehicles can actually plug into a vehicle-mounted cooling system and have chilled water pumped through tubing in their vests. This approach, however, isn’t fit for infantry — or police, for that matter — because you can’t very well keep your men attached some kind of refrigerator any more than you can strap one to their backs. You have to go with something a little more traditional.

This new model, designed by Swiss research company Empa, relies on two very traditional cooling mechanisms: Sweat and fans. Through the use of what amount to small, flexible air-conditioning shafts under its bulletproof surface, the Empa vest can moisten the surface of the wearer’s skin with water, blow air through these shafts, and cool the wearer much in the same way sweat does. This method eliminates the need for particularly cold water, effectively replacing a (big, hot, and heavy) refrigeration with a fan.

The vest can provide its cooling services for around 3-4 hours, at which point it can be easily refilled with water and have its battery replaced, preparing it for another go. The vest, which underwent tests in Zurich, got the thumbs up from the local police force.

Beyond bulletproof vests, the technology could have potential applications in things like camouflage suits and even more mundane things like backpacks. Further development is already in progress and let’s hope it really takes off. Thankfully, I rarely take fire, but I frequently have to do battle with backpack back-sweat, and I could sure use some backup on that front. Couldn’t we all?