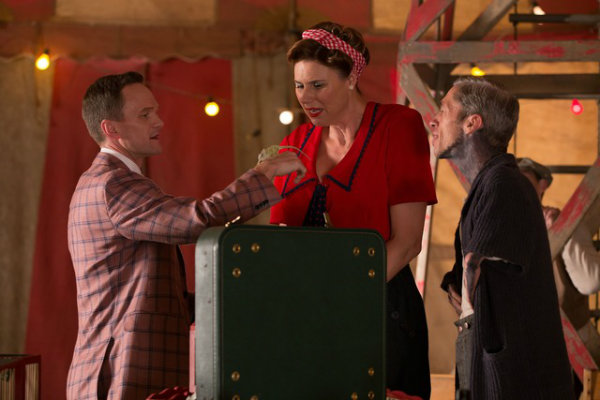 [Editor’s Note: As promised in our AHS open thread, Dan is here with his recap of Neil Patrick Harris’ debut!]

When we return to AHS after the two-week holiday break, we find Jimmy in jail, imprisoned for Dandy’s Tupperware party massacre. Stanley, whose capacity for unchallenged evil has become the show’s most renewable resource, has a more bald-faced plan than usual. This time, he is upfront about asking Jimmy if he can cut off his hands for sale to the American Morbidity Museum, in order to finance a lawyer; Jimmy agrees, out of desperation.

Back at the freak show grounds, Bette and Dot are writing in their diaries. Despite Jimmy’s absence and the series of frightening misadventures the twins have been through, they seem to have entered an unexpected state of nirvana regarding their lives. They believe their comrades to be the happiest people in the world because they “believe in pure pleasure.” Dot, who once reacted to her sister’s carnal thoughts with violent disgust, now happily states that “our top priority is sex.”

They conclude with throwing their diaries into the trash, which felt like a shame to me – I really enjoyed the duality of the sisters’ thoughts the diary sequences showed.  It seemed in this episode that their characters, once so disparate in a fun and at times downright humorous way, crept much closer to each other.

Then it’s time to meet the character who has given me a bit of hope for a strong end to Freak Show: traveling salesman and World War II veteran Chester Creb, played by Neil Patrick Harris. In a bit of hilariously flagrant symbolism, Chester’s main product is pet chameleons.

He’s also a magician and ventriloquist who literally begs Elsa for a spot in her show, and is overgrateful to the point of creepiness when she reluctantly agrees. His dummy, Marjorie, is voiced not by Harris but by AHS veteran Jamie Brewer, which is a very odd choice, but one that I might be okay with depending on where the Marjorie storyline goes.

It quickly becomes clear Marjorie is definitely more than a prop for Chester. He perceives her as alive, as his closest friend, and as verbally abusing him when they’re alone. He even occasionally has visions of her in human form. Yet every time someone else sees him perform with her, it’s clear he is throwing his voice (and, weirdly, sounding like Jamie Brewer).

So what’s the truth about Marjorie? I see the possibilities as twofold. The first is that her sentience is all in Chester’s head (and either her voice only sounds like that to Chester, or he’s an inhumanly talented ventriloquist). This would be kind of interesting, but also not at all unexpected.

The second is that Marjorie is actually alive. This would be the simpler but also the more surprising revelation, and although I doubt that’s where they’re heading, I really hope it is. I’ve been starved for the supernatural ever since Edward Mordrake left. Either way though, this storyline injects Freak Show with some mystery and weirdness it was direly lacking.

Meanwhile, Dell busts into the hospital room holding Jimmy, whose hands have, sure enough, been lopped off. That seems like a pretty quick decision for such a drastic action, but this is also the show where a cop decided in half a second to murder an innocent woman based on an extremely vague promise of money. 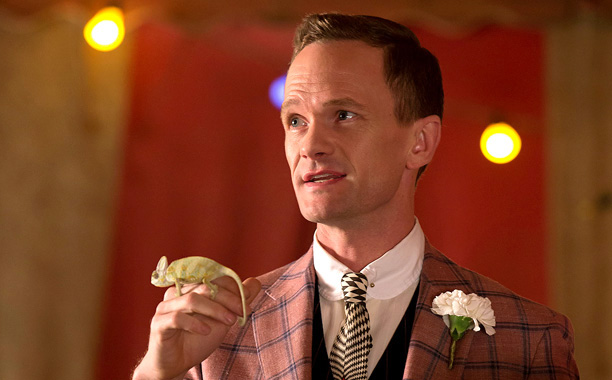 Anyway, Dell and Jimmy try to engage in some father-son bonding time. Jimmy asks why Dell didn’t have lobster hands, since both his father and his brothers had them. This leads to Dell delivering a sob story about how his father viewed him as a “freak for being normal.”

A sort of interesting concept, but it also felt like another feeble attempt for the show to throw some sympathy Dell’s way, which I’m pretty resolute in rejecting after he abandoned his child at birth, committed murder, and purposefully destroyed his wife’s only chance at an operation she desperately wanted.

Chester has taken an interest in Belle and Dot  — he approaches them proposing to “saw them in half” as part of his act. Dot briefly reverts to Grouchy Dot and says “we don’t want to be sawed in half.” It seems ridiculous that she thought he was speaking literally, but with the specter of separation still raw in twins’ minds, I guess it’s a touchy subject.

Chester wants the Tattlers to be his assistants and says meeting them was like “seeing old friends” or “coming home.” We then cut to a flashback where Chester, wearing his army uniform, holding Marjorie, looks disaffected and almost angry as he watches two women having sex. They certainly aren’t conjoined twins, or twins at all. So why did Bette and Dot remind him of these women, exactly? I’m still not sure.

But wouldn’t you know it, Bette and Dot want to have sex with Chester too. As they begin, his head starts pulsing with pain as he flashes back to the women from before again – they asked him to join in, but he just wants to go to the garage to work on his magic. Despite his uniform, it turns out this is Chester’s home, and that this is four years after the war ended. And also, one of the women happens to be his wife.

Back in the present, Chester is able to engage in the act, but only once he brings Marjorie near them. So, that’s creepy. It’s the first time for Bette and Dot, and Bette seems to love it, while Dot isn’t so sure. And there’s even an unseen fifth person present for this event – someone surreptitiously photographing it all.

Cut to: Dandy! Remember him? The photographer was the cop Dandy paid off to clear himself from the Tupperware party massacre investigation, who has transformed into a private eye. When Dandy learns someone else has been intimate with the former objects of his obsession, he’s unhappy about it in that disingenuous sociopath way of his.

I’m still not forgiving Dell, but he and Amazon Eve (who, let’s not forget, he attempted to kill once before) do team up to break Jimmy out of the ambulance taking him back to jail, by killing the cops transporting him. That leads the cops to return to the freak show, again, to “tear this place apart.” Elsa’s sardonic response: “…again.” When your characters are making thinly veiled meta-comments on the recycling of plot points, that probably isn’t a great thing.

The cops are supposed to be searching for Jimmy and their dead colleagues’ bodies, but Chester has a bigger problem: Marjorie is missing. Of course, the cops don’t want to hear about a puppet. But there is someone who shows up to “help”: Dandy. He emerges from the carousel, wearing a fur coat, as Chester frantically stumbles around looking for her.

Dandy’s conversation with Chester brings to light some shocking facts dug up by Dandy’s private detective. Chester’s wife and her lover were murdered and the culprit was…”Marjorie.” Or was it actually Marjorie? Either way Dandy assumes, of course, that Chester really did it.  Dandy tells Chester to look for Marjorie in the big tent, which, despite the cops “tearing the place apart,” is completely empty.

Sure enough, Marjorie is there, in human form (and eating grapes, no less). She tells Chester he must cut the twins in half, for real. The connection between this and Dandy is unclear – did he somehow get Marjorie to say that? How would Dandy even know how to do that, especially since he clearly doesn’t believe she is more than a dummy? But why else would Dandy confront Chester in that way? Just to scare him for a few minutes into thinking she was lost? That seems awfully tame for “the U.S. Steel of Murder.”

Suddenly Maggie shows up for the first time in the episode, telling Elsa she has to show her something. We then cut to Dell who has returned to his trailer to find Desiree holding a gun. She knows he killed the cops, which is a pretty weird incident to push her over the edge considering the much less defensible murders he’s committed. He says he didn’t kill anyone “who didn’t have it coming,” which is a total lie. Cut to…

Unmistakable evidence of that, as Maggie somehow shows Ma Petite’s preserved-in-formaldehyde body to Elsa. How we’re supposed to accept that Maggie managed to steal the case out of the American Morbidity Museum and transport it more than a 1,000 miles is beyond me. Cut back to…

Dell admitting he killed Ma Petite. He’s then shot in the head – not by Desiree, but by Elsa, who has crept up behind him. I still find it strange how Ma Petite has become a crucial component of almost every major plot point, but I was still glad to see Dell come to a very deserved end.

— I’ve been hard on this show’s increasingly jumbled and illogical plotting, but I do have to say the cinematography in Freak Show has been stunning, and possibly the best of any of the four AHS seasons.

— Although I preferred when Bette and Dot had radically different personalities, Sarah Paulson remains enormously impressive in her portrayal of both twins. Even with their motivations more aligned than ever before, she still gives each one completely distinct mannerisms and speech patterns. That she wasn’t nominated for a Golden Globe, while Jessica Lange (who I’ve found less than impressive this season) was, is crazy. Hopefully Paulson gets some love from the Emmys later this year.

— Another reason I feel hopeful about the character of Chester is that it seems his magic act will play an important role in future episodes. The mystery and menace of a circus or freak show-style performance is something I think has been vastly underutilized thus far.

— There were also a few references to Chester having a metal plate in his head – what is that all about? I certainly hope that doesn’t go unexplained. Or as I like to call it, “to Clown-Elsaville.”