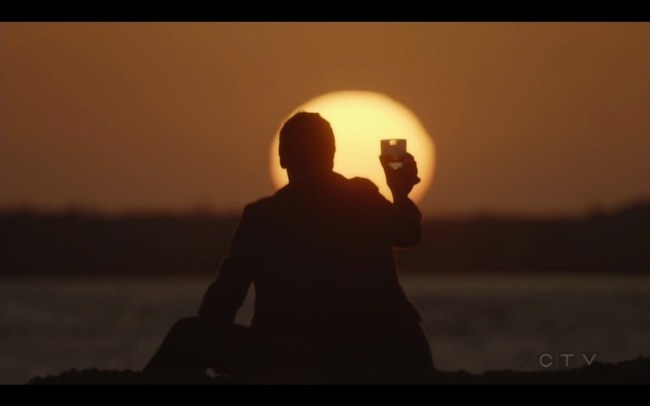 And so, one of my favorite seasons of Agents of S.H.I.E.L.D. comes to an end.

It handily tied up three different story arcs, and it did so with quite a lot of skill. As the episode ended, I found myself quite satisfied with how each arc got its proper time in the sun. (Pun intended? You decide, reader.)

So, without further ado: the recap!

Going into this, we already knew that Robbie Reyes/Ghost Rider was back and he wasn’t too happy about how things have turned out with the Darkhold. Watching him leap right into action going right after Aida, Anton (a.k.a. kinda-sorta MODOK) and the Darkhold was pretty awesome, especially given the fact that we know he’s the only one who can actually harm Aida and her newly-found Inhuman powers. As well, watching him fighting alongside Daisy was such a damn treat, as Coulson alluded to (You two? Together? Finally? And I missed it?!).

Of course, Ghost Rider’s a bit… well, overpowered for a lot of what the team might run into, so it makes sense that he’s the type of being that kind of moves and acts according to his own will. It means he doesn’t have to stay for long, and once his mission’s done, he’s gone. It sucks to see Robbie (and along with him, Gabriel Luna) go, but obviously, his departure leaves the door open for his potential return. He can, after all, travel between dimensions now, and that’s just how that’s going to be, I guess.

The Framework coming to an end was emotional in so many different ways. I can understand why Yo-Yo went into the Framework to save Mack–that’s love, you know–and really, it was just painful to watch Mack lose his daughter all over again. The delayed, kinda stretched-out emotional climax of watching the Framework come to an end with us left unsure if they made it or not was… well, a bit cheesy, but whatever, they both made it out, so I can’t be too salty about it. Moreover, they made it out, and they even found a way to stay together, with Mack finally saying he wants to spend his life with Yo-Yo. God damn right.

Coulson and May might not have gotten the emotional resolution I was looking for, exactly (God, can these two ever just say “Hey I have feelings” in like, plainspeak, geez), but I guess that’s okay because I don’t know if my feelings are ready to watch that ship set sail quite yet. I’m just convinced that if it ever does, then one or both of them are doomed to die by the end of the season. Hey, I don’t write the TV rules, I just write about them.

Same goes for Fitz and Simmons, I suppose, because by the end of it there, they weren’t exactly over everything that went on between them. That being said, it was painful to watch Aida kill Simmons (which was later revealed to be an LMD version of Simmons as a decoy), and it was also painful to watch Aida gloat about it to Fitz.

Aida meeting her end at the hands of Ghost Rider was pretty great to see–knowing it was a COULSON GHOST RIDER made it even more amazing. I could kinda tell something was up when Coulson was shown wearing those gloves while handling the Darkhold when Aida confronts him. It’s a bit like the same gloves that Robbie wears when he’s driving (uh, driving gloves), but I never really put two and two fully together until Coulson went all firehead on Aida.

Finally, though, I have to say, the best bow out of the season went right to Radcliffe. After Mack and Yo-Yo escape, I have to imagine that Radcliffe found himself alone in Mack’s home with the Framework crumbling around him. I love that even with the knowledge that the world is literally ending around him, he still chooses and wants to be a hero. He even went to save Yo-Yo, who was trapped in the Hydra Triskelion. But his bow, with a bottle of liquor on a sandy beach in front of a gorgeous sunset was incredible. “And so, this is how the world ends, not with a big bang, but with a–” … and scene.

That’s how you set up a redemption arc, friends.

Speaking of redemption arcs, a part of me wonders what it was like for the world to end for Ward, Chip, and the other folks who had a nice short reunion with the show over the course of the season. I don’t know if it all would have fit in this episode, and surely it would have made the entire thing feel a bit clunky and overloaded, but still. I wonder. Times like these, I wish I could draw, because I’d fanart the hell out of that and post it onto Tumblr or something. Anyway.

What the fuck, Aida? It’s incredible that even as a human, with full license to use emotion, she’s turned out to be even more inhuman (note the lowercase “i”). She had everything she wanted, but without Fitz, apparently that all doesn’t mean a damn thing. Watching Anton very subtly manipulate and play her against her emotions was a bit hard to watch, though that’s a good thing for the show, because that just goes to show how incredibly villainous the man really is. You know he’s not going to be gone for long, and could very well be the next Big Bad for this upcoming season (though the stinger might suggest otherwise, but more on that later).

But Aida served as an amazing character all around for the entirety of this season, when all is said and done.

I’m not a major fan of Anton’s character–the man’s gone from Inhuman-hater to basically MODOK–and he does seem a bit one-dimensional. Hopefully if he ever does come back, then he’ll be given a bit more depth than that. He plays a fine henchman to Aida’s mastermind, though.

In other bad things, we all knew that Hope couldn’t stay (how’s that for symbolism), and that one way or another, she was going to be gone by the end of the season. It was an outside bet that she’d make it out of the Framework, what with the Looking Glass and all, but when that invention sank to the bottom of the sea a few episodes back, it was obvious that things weren’t going to end well for the precocious youngster. It sucked, majorly to see Mack lose his daughter for the second time (as I said before), though he seems to be adjusting to that loss super well, moreso than could have been expected, really.

I don’t know how to feel about that ending. Like, yeah, in typical AoS fashion, they set up all sorts of weird season-ending cliffhangers and all, but watching the team get freeze-framed in a diner only to be taken to space by some weird spooks feels… well, weird. Yeah, weird, even by AoS standards. The post-credits scene has Phil waking up in some space freighter-looking thing like he’s just woken up in an episode of The Expanse, and I’m really curious (though cautiously so) about how far from the secret agent/spy core this next season will take us. I mean, a lot of the Marvel Cinematic Universe is headed to space anyways (thanks, Guardians of the Galaxy), and not that that’s a bad thing, but I’m not sure what all the agents could really be doing up there.