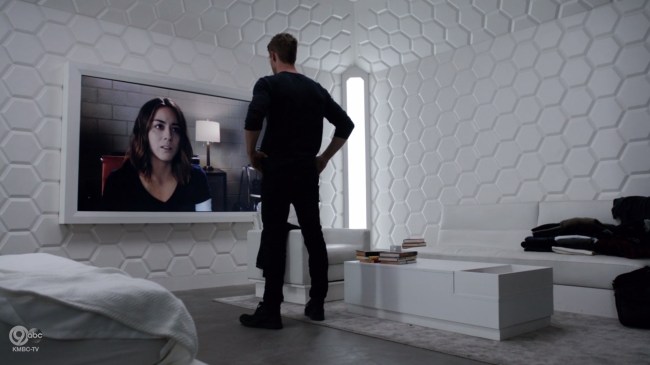 The political boulder Civil War threw into the MCU pond ripples down to the small-screen this week, highlighting the difference between public officials and private citizens as well as the tenuous balance between security and freedom. It’s tough for me to discuss certain aspects of this episode without bringing in at least general details from Civil War, but since the film hasn’t even been out a week, I’m going to skirt around that conversation as much as possible for now (and use spoiler blocks when I can’t). Maybe once AoS is over and I’ve had a chance to see Civil War a second time, I’ll do a longer write-up on the conversation the two stories are having with one another.

The point is, if you’re an AoS-only viewer, you can read on without fear of Civil War spoilers, like how . What a twist!

Coulson meets up with Talbot to discuss the wider-reaching affects of the Sokovia Accords–namely that, in addition to putting the Avengers under U.N. custody, they also want to create a classified list of “enhanced” people, including all the newly turned Inhumans. It’s one thing to demand accountability and oversight of a powerful, public peacekeeping organization, but to tag and register private citizens is a serious breach of privacy and a potential threat to their safety, and Coulson’s understandable wary of it. I suspect (and hope) we’ll be dealing with this Inhuman Registration Act as an ongoing conflict next season, but for now SHIELD has bigger bugs to fry. Like, you know. The friggin’ apocalypse.

The need for transparency and accountability between the various government branches has become a priority (and let’s not kid ourselves: SHIELD is basically an off-the-record CIA at this point), so in the interest of building trust Coulson shows Talbot around their super-secret base. He introduces him to Elena, Lash, and an increasingly disgruntled Lincoln, then clues him in on the whole “Inhuman Parasite who could end all life as we know it” thing. Talbot wonders if it’s too late to return to that state of blissful ignorance. 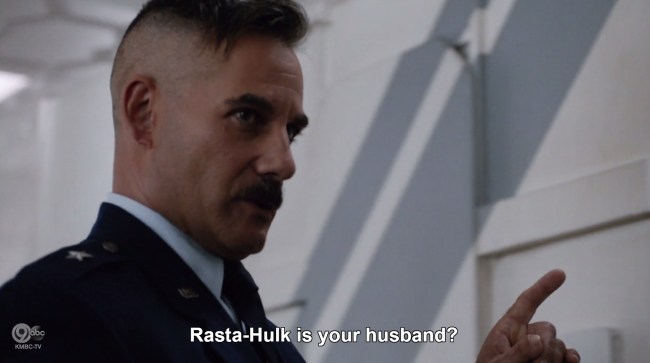 I both hate and love this man so very, very much.

While the bosses talk general strategy, the rest of the team focuses on the immediate and personal. Fitz fights to keep Daisy out of their systems. Mack struggles with despair and Elena encourages him to drink beer and not lose faith (wise advice on both counts, I’d say). May tells Lincoln to sit down and shut up and eat his dinner like a good boy. Lincoln responds by reaching out to Daisy and asking her to help him escape so they can run away together, “just the two of us.”

AoS continues to use Lincoln’s well-known issues with control and distrust of authority to pull bait-and-switches (with both the cast and the audience), although this time I didn’t buy it for a second. Daisy does, though, and she uses her Magic Comic Book Hacker Powers to not only get Lincoln out of his cell, but also to fly a Quinjet straight to her. Oh, sorry, did I say “to her”? I meant “to Hive.”

Well, two can play at that game, missy! 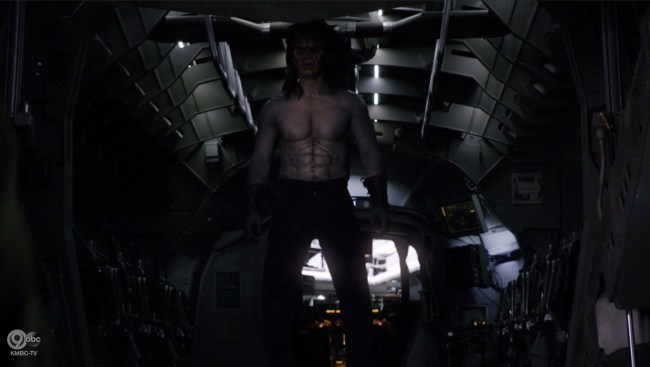 “I came here to kick ass and put on a shirt–AND I’M ALL OUTTA SHIRTS.”

And speaking of Hive, he spends this episode going more-or-less Full Mustache Twirl. He abducts a gang of Watchdogs and throws them into a metal crate to gas them with Daisy Blood, which turns them into a bunch of mindless Hive drones. (I mean, I guess it is an improvement on “violent genocidal supremacists,” but that’s not saying much.) Radcliffe is horrified, but Hive likes the cut of their melty, obedient jibs and plans to make more of them. To do it, he’ll need “all” of Daisy’s blood.

In other words, Hive’s “utopia” is a place where he has total control over others. He doesn’t really care about the quality of life or even how many survive, as long as he’s at the center of it and everyone is under his sway. He tells Daisy he wants to “emancipate” humans, setting them free from both their powerlessness and their solipsistic existences, but despite his pretty words he’s not offering a Buddhist-like enlightenment–this is about domination, not Oneness. That he doesn’t hesitate to sacrifice Daisy (someone who will still debate and challenge him even when she’s under his sway) in exchange for an unquestioning army all but confirms that. In the immortal words of Cecil Palmer: “What. A. Jerk.”

Oh–but back to that surprise SHIELD sent him! Whoooo’s ready for an Epic Glowing Anime-Style Chi-Blast Battle?!

The inevitable Hive/Lash clash comes two episodes too early, which is how you know it’s not gonna go down well for our boy in blue. When an anemic Daisy tries to intervene on Hive’s behalf, Lash uses his chest-yanking powers to, uh… yank the HiveMind out of her? Did we know he had precision like that? I don’t think we did. As is often the case, AoS struggles with their Lash story line because they always want him to be a surprise (he’s Andrew! he came back to base on his own! he has magic anti-Hive powers!), and it leads to shortcuts that feel more like lazy writing than carefully planned twists.

And speaking of surprises, as soon as Lash princess-carries Daisy to the Quinjet, he immediately gets stabbed by James (who conveniently returned to base at that exact moment!) and dies. Farewell, Andrew. You were a kind husband, a good psychologist, and a useful plot device. I’m sorry you had to get jerked around by the writers so much, but I am glad, at least, that your redemption came from healing others rather than killing them. It’s a fitting end to a character whose life was built around helping people, and speaks to a quiet victory–the doctor triumphing over the killer, at the very end. 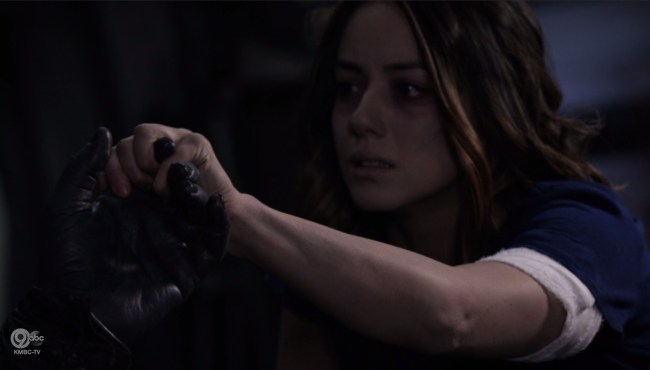 WELP, there go my feelings.

Freed from Hive’s influence, an exhausted, sickened Daisy musters what energy she has left to get the Quinjet in the air and stagger her way back to base. There’s nothing triumphant about this moment, and I suspect we’ll be seeing plenty of reaction to it next week, once the shock dissipates and the reality of the past few weeks sinks in. For now, though, we have to focus on the next crisis: Hive’s still got that warhead he stole, and FitzSimmons suspect he’s going to use it to rain Terrorgen Mist down on a significant portion of the population.

But on the bright side, Elena gave Mack her cross, which is such incredibly obvious foreshadowing that it has to be a misdirect. Mack is safe! He’s gonna make it to Season 4! Which is great, because I love Mack, and also because if AoS had killed off another black character, I might’ve had to throw down.

Now the real question is: Who will be the next member of The Sisterhood of the Traveling Cross? All answers are bad ones. I like this cast too much. Yes, Lincoln. Against all odds, I even like you now. 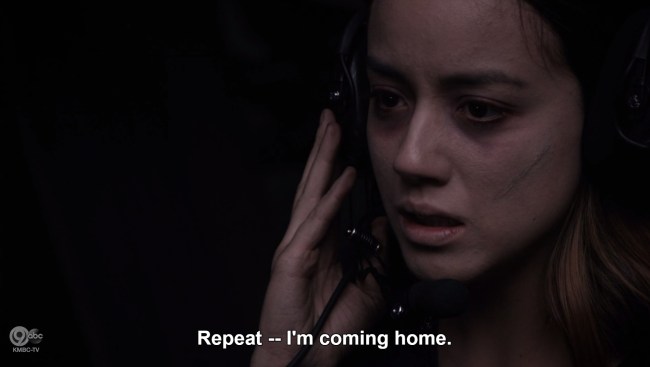 Aaaand there go my feelings again.

So Daisy gets rescued after all. I have a lot of conflicted feelings about this, and not just because of the plot conveniences. The more I think about it, though, and the more I move away from my (frankly unfair) knee-jerk “oh look a dude just saved a lady, that’s never happened before” reaction, the more positive I feel about it. Because, sure, Lash just saved Daisy, but it’s not like this is an in-story trend. The gender parity on AoS is really pretty solid (even when it comes to the show’s weaker points, like Andrew existing to forward Daisy/May’s stories while Rosalind existed to forward Coulson’s), with tons of well-written women who are consistently saving the day and the guys’ butts along the way. Having female characters who sometimes need help doesn’t make them weak–it just makes them people. And Daisy is achingly aware of that now, I think.

While it does seem to undercut last week’s conversation about how Daisy is always getting saved each season, there are still two episodes left, so I don’t want to make judgments too soon. I personally wanted her to break free of Hive’s control on her own, but I suspect this is intended to be the stumbling block, the Hero’s Moment of Weakness On Their Journey, where they acknowledge their humanity, come to terms with their trauma, and emerge stronger than before just in time to win the final battle. So if Daisy can bounce back from this and be instrumental in taking down Hive, I think this could be an important part of her story arc, humanizing rather than damselfying. We’ll see where next week takes us. 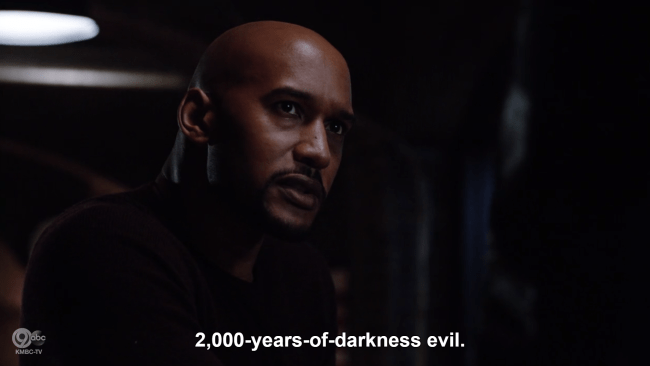 On that note, I need to give the writing team credit once again for how nefariously well they’ve written Hive. I’ve spent the past few weeks (and many of you in the comments have, too) wondering how much control Hive really has on his “followers,” considering whether part of Daisy’s willingness to follow him is because we’d seen that she already shared some of his beliefs, debating the possibility of a give-and-take between them and just how monstrous Hive truly was. And wow, yeah. I fell right into the trap of the charismatic cult leader, and came dangerously close to victim-blaming along the way. Not cool, Me.

We knew Hive had a grip on Daisy that was based in manipulation and far stronger than just a mentor/mentee bond, and the sheer number of uncomfortable glances she gives him this week made that even more obvious; but it’s not until we see the look of shell-shocked horror on Daisy’s face after Lash removes Hive’s influence that we realize just how total his control really was. Once she wakes up, she doesn’t hesitate. There’s no lingering loyalty, no question of “well his means are awful but his ends are just.” She doesn’t even consider trying to finish off Hive herself. She just gets the hell out of there as fast as she can. 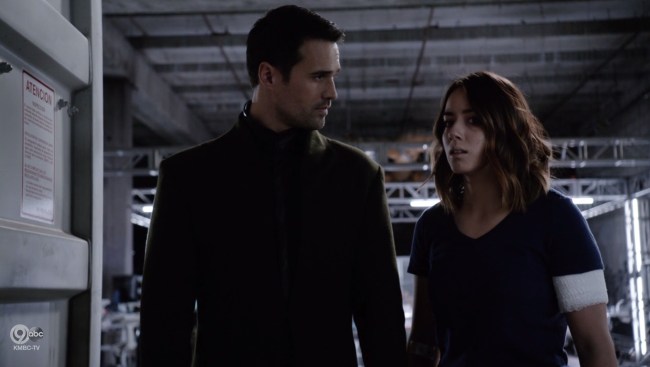 Even before Lash cured her, Daisy knew this was seriously effed up.

Hive speaks of lofty goals. Appealing ones, even. But at the end of the day he’s a controlling parasite, drugging, using, and killing people to forward his own conquest. Worse still, he doesn’t even understand why this might be wrong–doesn’t consider other people’s wants or needs, their agency or pain. Despite his talk of unity, he’s the most self-centered character on the show. Maybe those comparisons to the devil are more apt than I’d originally thought.