LOTR Ripoff Age of the Hobbits Is Changing Its Name, Warner Bros. Is Still Suing Just to Be Sure 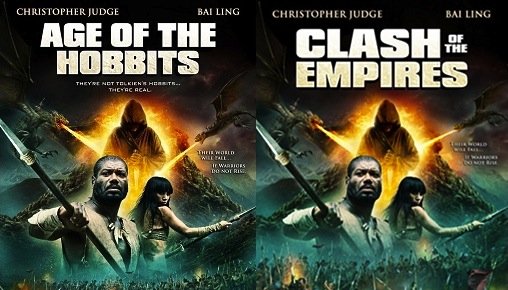 Looks like that’s game, set, and match to Warner Bros. A few months back we got word that A) a company called The Asylum was producing a Lord of the Rings ripoff called Age of the Hobbits and B) Warner Bros. subsidiary New Line Cinema, which is producing The Hobbit trilogy, was planning to sue the pants off them. Now it appears that Warner Bros. has secured their victory, as Asylum has changed the name of of the film (which co-stars Christopher Judge, aka Teal’c from Stargate, interestingly enough) to the non-copyright-infringing Clash of the Empires.

Warner Bros. isn’t backing off the legal pressure, though; a spokesman says they’re “moving forward” for a preliminary injunction, and there’s still a temporary restraining order in place so Asylum can’t change their mind and release Empires—which is about these Hobbits, not these Hobbits—under its old title.

So. The corporate giant has successfully secured their copyright against the machinations of a tricksy, opportunistic would-be thief. If this were a movie, I wouldn’t be rooting for either of them. The real underdog to this story is screenwriter Eric Forsberg, a self-described veteran of the mockumentary industry whose credits include War of the Worlds 2: The Next Wave, 30,000 Leagues Under the Sea, and the underrated sci-fi classic Snakes on a Train. No, not Plane. Train.

Says Forsberg, “Tolkien was my absolute hero when I was growing up…. I’d love to do a film with the Tolkien estate… I am sorry that (the movie) has caused such controversy. I only wish his family and his legacy the best (and) would never do anything purposefully to disrespect Tolkien. I hope that the spirit of J.R.R. Tolkien smiles down on all of us and isn’t angry with me.”