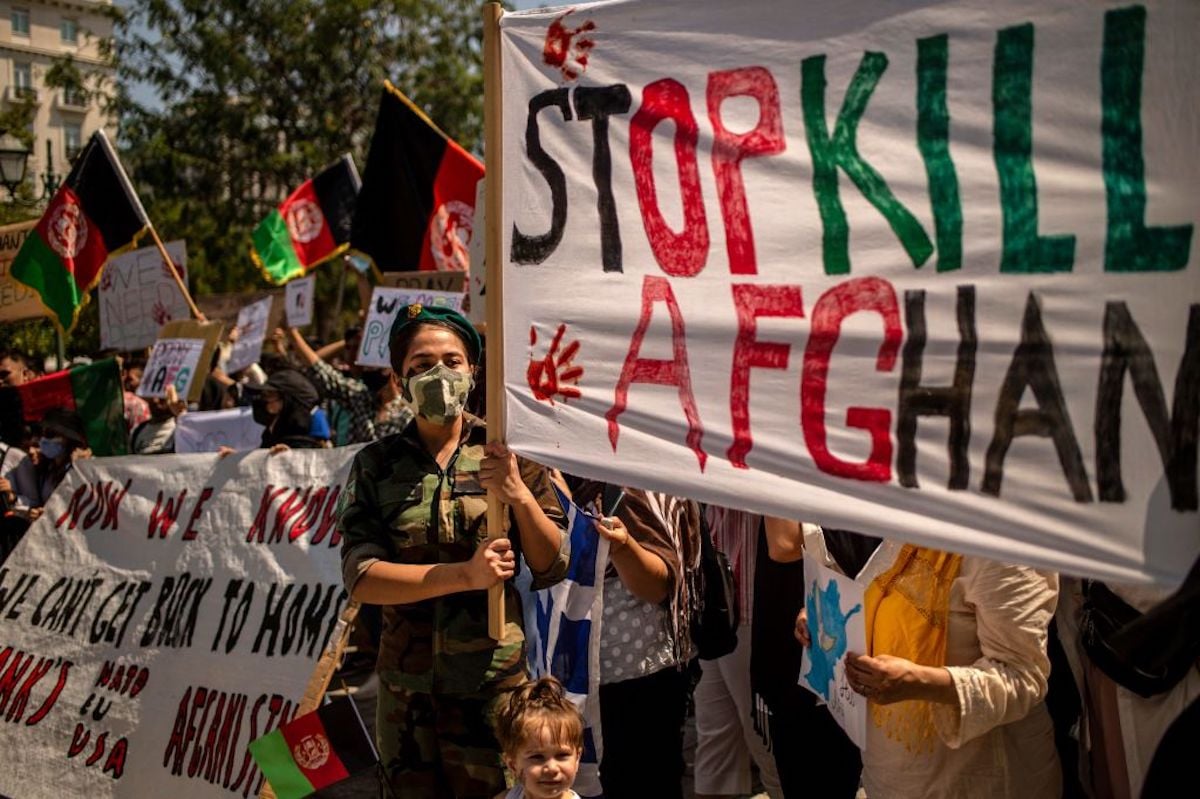 (image: Afghan who live in Greece take part in a protest over Taliban takeover of Afghanistan, in Athens on August 18, 2021)

Unlike many a newly-minted Twitter pundit, I do not claim to be an expert on Afghanistan. When the U.S. first invaded in 2001, I was not yet ten years old, and the war has dragged on, too often without much national conversation on events there, for most of my life. Like many people in the days since the dramatic fall of cities in Afghanistan to the Taliban and the collapse of the government, I am learning and researching, trying to understand what is going on and how I and others watching from afar can help.

In doing so, I’ll be sharing resources and information about what is happening at current, and what actions we can take. Women, religious minorities, LGBTQ+ people, journalists, human rights workers, and people who worked with the U.S. forces for years are in particular danger in Afghanistan right now. The situation is fluid and changing, but we’ve tried to compile some resources for those who want a better view of what’s been emerging on social media and ways to contribute your own time and/or money to different causes.

Female reporters were taken off the air on TV in Afghanistan briefly but some have returned to their presenting positions.

Female presenters are back on TV in Afghanistan, after briefly being taken off air as the Taliban took over the countryhttps://t.co/L6siOYm6re pic.twitter.com/KFKoDCvELc

But the situation for many women, especially those in the public eye, remains dire.

Over the past hour, several Afghan female friends in Kabul told me the Taliban are in their neighbourhoods, going house to house, looking for women in govt and media, making lists. One sent me a photo from her living room showing armed Talibs outside. “I love you,” she wrote. 💔

“Most of the women and girls I know have also fled the city and are trying to find somewhere safe. I cannot stop thinking and worrying about my friends, my neighbours, my classmates, all the women in Afghanistan.” https://t.co/nAnVOfhEUb

There is widespread “fear and despair,” in the words of Dublin-based journalist and activist Razan Ibraheem.

Shamsia Hassani, the first Afghan graffiti and street artist, captures the fear and despair of women in Afghanistan.
It is mesmerising and heartbreaking 💔 #Afghanistan #AfghanWomen pic.twitter.com/GJFKR6D9mK

Atrocities are being reported by people on the ground.

With the Taliban’s rapid advance, many women in Afghanistan are fleeing their homes, fearing murder, rape and forced marriage. pic.twitter.com/cOJC0g4ikf

Nobel Peace Prize winner Malala Yousafzai, who was shot in the head by the Taliban nearly a decade ago in Pakistan for her public advocating for women’s rights and education for women, spoke with 5 Minutes On about her concerns for people living in Afghanistan currently. She also penned a recent Washington Post op-ed about her fear for Afghanistan’s women.

Nobel Peace Prize laureate Malala Yousafzai says she is “deeply concerned about the situation in Afghanistan right now, especially about the safety of women and girls there.” https://t.co/xv8tHA1Uz8 pic.twitter.com/TSQL3QOhcP

The women of Afghanistan are frightened of what the Taliban rule means and fear “a dark future.” Nasreen Sultani is the principal of Sardar-e-Kabuli Girls High School in Kabul and has spent years fighting for the rights of her students. She now is afraid of what the future holds for the women of her school and the country. Talking with NBC News, she said, “I am very sad. When I see all these girls, I get really upset now.” This came a week before Afghan President Ashraf Ghani fled the country, leaving the Taliban to seize control.

As NBC News explains, the fear is that the Taliban will impose a stricter interpretation of Islam that limits the rights of women and others. “Sultani is one of many Afghan women in leadership roles who say they fear a return to Taliban rule will also spell a return to its austere and harsh interpretation of Islam, which long severely restricted women’s rights until the U.S.-led toppling of the regime in 2001.”

The Taliban’s former rule had blocked girls from attending school and women were largely barred from “appearing in public without full body coverings and male escorts.” If the Taliban’s rules were violated, women faced “flogging in public and execution.”

While this time around, the Taliban are claiming that they will write rules that allow women to have public lives, the rightful fear and uncertainty is still there for the women and other groups at risk in Afghanistan.

“Women in Afghanistan are the most at danger or most at-risk population of the country,” said Fawzia Koofi, a women’s rights activist, former lawmaker, and member of the Afghan delegation who was working to negotiate peace with the Taliban prior to the U.S. Military’s withdrawal, and said that women felt betrayed.

We urge @POTUS to evacuate ALL of our Afghan allies and their family, at-risk women, children, LGBTQ+ community members, and others. We refuse to let them suffer human rights violations under the Taliban. #Afghanistan #SaveOurAfghanFamilies

There are also reports of threats made against religious minorities in Afghanistan.

From a Church leader in Kabul: “The Taliban is sending letters to churches saying, ‘We know who you are and we’re coming for you.’”

Here is a list of resources and how you can help those being impacted by the Taliban. We’ve further compiled some Tweets from trustworthy sources and efforts worldwide. There are many ways to assist both those who are still in Afghanistan in addition to refugees who have left the country.

How to Help People in Afghanistan Right Now https://t.co/AGcA1jNy3n pic.twitter.com/5m9su1ACDY

Here’s how to help people fleeing Afghanistan and the families still in the country https://t.co/VkXQdgQAhK via @Yahoo

Feel helpless over the situation in Afghanistan? You’re not.

Here’s a collection of resources you can use to take action. https://t.co/79Ockqf0Wp

Anyone watching what’s happening in Afghanistan looking for a way to try and be helpful: https://t.co/GXd9IIlTOK

HOW TO HELP AFGHANISTAN IN LESS THAN 5 MINUTES as a UK or US citizen/resident.

Make the time to do this. Lives depend on it. Video via @zhashx. pic.twitter.com/s2PRfbAh8g

How to help Afghanistan refugees: Charities and causes you can donate to and how to write to your MP https://t.co/jmUkuledPX

.@IslamicRelief thanks @7NewsDC for including us in an article about ways to help in #Afghanistan. https://t.co/4Kv9zRSE2r

How to Help #Afghanistan #Refugees Amid the U.S. Withdrawal After 20 Years of War With the Taliban https://t.co/LYbkTXU37M pic.twitter.com/s4BrHlceHK

Useful roundup here of ways to provide practical support to the people of #Afghanistan.https://t.co/V8PDvPccOZ

How to Help Afghanistan Refugees and Those Who Need Aid https://t.co/zFvbIGxXEM

How to help Afghanistan: Things you can do right now for a country in crisis https://t.co/4YpDGVuLNP

So many of you are asking how to help #Afghanistan-THIS is where you can help!! I am partnering with ⁦@stephsinclair⁩ and @tooyoungtowed help evacuate and resettle high risk Afghan women. Please see link in bio and donate any amount if you can. https://t.co/RZEYrd9ggD

Please share any additional resources or organizations you know that are doing this vital work in the comments below and I will continue to update this piece.