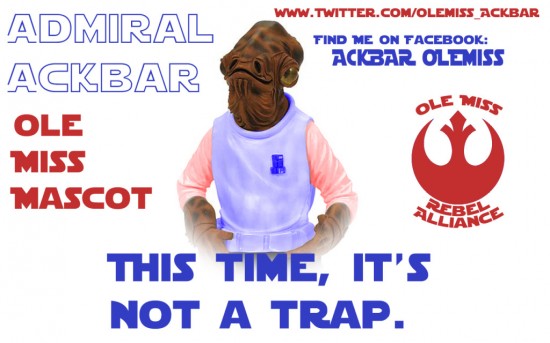 This past weekend, we reported that a campaign was underway at Ole Miss to make Admiral Ackbar the university’s new mascot. As geeked out as we were by the possibility of the beloved, squidlike Star Wars Rebel Alliance Commander of “It’s a trap!” fame leading a different set of Rebels on the playing field, we were skeptical that students would want to oust their current plantation-owning semi-mascot, Colonel Reb.

Well, color us happily surprised: an early report from TMZ on yesterday’s voting says that Ackbar is currently the “favorite” among the student body.TMZ:

Tuesday, the students voted in favor of crowning a new mascot to represent Rebel Nation … and the favorite so far is none other than the most famous Mon Calamari in the entire universe.

Several pro-Ackbar websites have recently emerged — making the Admiral the heavy favorite. The University tells us the decision on the mascot is entirely in the hands of the student mascot committee. The University will hold a vote in the near future — we’ll keep you updated.

As Gamma Squad points out, even a unanimous student body vote for Ackbar might run into complications: namely, George Lucas‘ protective guarding of his every creation. See: the Motorola Droid, whose creators had to pay Lucas for the rights to use the word “droid” — it’s unlikely that Ole Miss will cough up that sort of coin. But in this case, we’re hoping against hope that this campaign can upset the imperial fleet and secure Endor, or at least a bunch of tailgates.