Adi Shankar: Castlevania "Made By Fans And for the Fans" | The Mary Sue 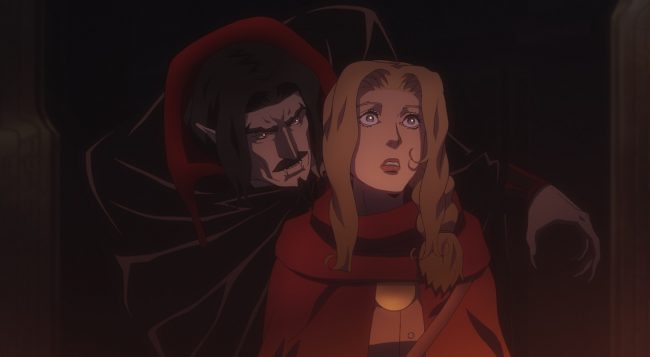 The first season of Netflix’s Castlevania is off to a great start, something that feels extremely rare for any video game adaptation. While some of the reactions have been mixed to tropes like the cartoonishly evil church and generous amounts of gore, the first season does a great job of setting up a story which we can look forward to in the upcoming eight-episode second season. Whatever your impression, the fact that video game adaptations are often seen as almost doomed-to-fail means there’s no denying there’s a triumph for the genre here.

With writing from Warren Ellis, a nostalgic hand-drawn animation style, and a grip of fans, Castlevania takes most of its inspiration from Castlevania III: Dracula’s Curse, going through the tragic backstory that unleashed Dracula’s wrath on Wallachia and Trevor Belmont’s journey to defend the nation with the help of Alucard and Sypha Belandes. In an interview with executive producer Adi Shankur, who has also just picked up an adaptation of Assassin’s Creed, we discuss what makes a video game adaptation good and what it means to understand fandom.

“I can tell you how it used to work, which is why I quit and started making stuff like the Power/Rangers short and moved into this,” says Shankar, who turned down a live-action adaptation a few years back. “Basically, you take a video game … let’s say it sold 20 million copies. The belief is that those 20 million people are going to show up opening day anyways and watch the movie. So why try to make the movie for them? Let’s make the movie for everybody else.”

Shankar identifies himself as a “gamer first and a movie-lover second.” Having worked on fan projects like The Punisher: Dirty Laundry, Venom: Truth in Journalism, and Power/Rangers, he’s a big fan of fandom and believes strongly in its power. Reflecting on how the video game space is different from the many comic adaptations we’re seeing, he says, “Comics I think have just been around longer, so there was eventually a generation of people who grew up loving comic books and wanted to see them done right and did them right. I think video games is our generation’s thing because we’re the generation that grew up with video games.” 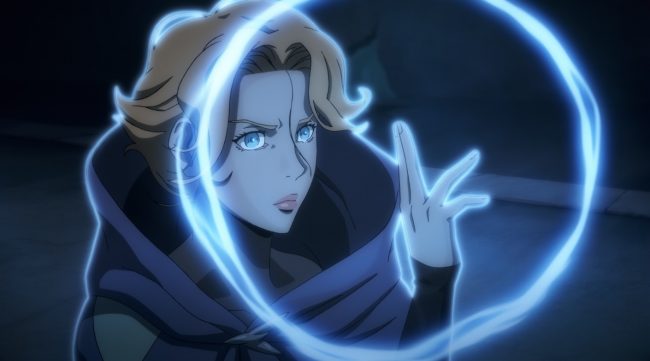 When I ask how he balanced the fandom audience from those less familiar with the game, Shankar emphasizes that Castlevania is a story “made by fans and for the fans.” However, that doesn’t mean the series is necessarily an inaccessible one. “I think there’s a common thread among all of us, where we really want to grow the culture of whatever we do. So if you really like Final Fantasy, you want other people to like Final Fantasy,” he points out. “You’re trying to explain to people why Final Fantasy is cool. But you’ll never pretend it’s something it’s not. But it’s about taking and going—ok, so my friend over here is into theater or sports or something. How do I explain why Final Fantasy or Overwatch or Wolverine is cool using the language that that guy understands?”

It’s easy to draw moments of the Castlevania Netflix show to moments we experience in games, whether it’s a boss fight that requires you to make use of pillars or an information-gathering moment where you have to talk to everyone in the village square until a cut-scene happens. Its earnest and unabashed dedication to the vampiric tropes is one of its great charms and an illustration of what Shankar means when he says the adaptation won’t “pretend it’s something it’s not.” The language of video games is a theme that comes up a lot in our conversation when we talk about the challenges of adaptation.

“It’s the language of movement and motion,” Shankar explains. “Think about how important the game engine is. If you look at some of the most popular video game franchises ever, a lot of them end up being anthology series where you really buy into the character like Mario, but there’s no always some kind of ongoing narrative like, ‘Oh, what’s going to happen to Mario next week?’ Or it’s things like Grand Theft Auto. It’s a world.”

So how do you adapt something that feels so difficult to translate? “There’s a lot that goes into the game that you can’t put into the show or the movie because there’s aspects to gaming that don’t really have a story,” the producer notes. He points to a “sixth sense” that develops when you’re a fan and hugely familiar with a story. “It’s not unlike a musician who’s out there covering their favorite song,” he says. “These are some notes that I have to hit. I have to hit these notes and I’m not changing them—I can’t change them because they’re sacred. And you also know what you can and should make your own.” Shankar points to the show’s dialogue as something that the team had to “make their own,” as it’s quite sparse in the game. 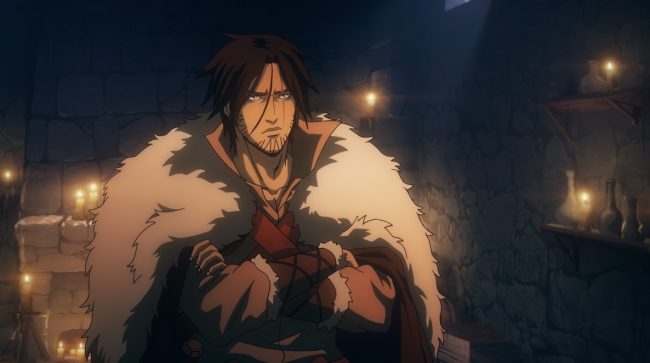 In terms of format, Shankar emphasized “character development” and having a villain that was understandable and relatable. What he was “hell-bent on avoiding”? The “monster of the week” format.

“Oh, this week Trevor needs to defeat the Frankenstein! Or, oh wait, he can’t because the Frankenstein has beaten him two times already—but he learns at the end of the episode that all he has to do is work with and trust Sypha and work as a team. And then he can beat Frankenstein.” He jokes, “I just pitched you a parallel universe version.” Rather, Shankar’s aim was allow viewers “to develop a deeper relationship with the characters and a deeper understanding of them.” Looking forward, he says, it allows for “a more expansive season two.”

As well, the style of the show definitely has a strong nostalgic feel as animation seems to be dominated by CGI and 3D these days. Shankar mentions the joy of Saturday morning cartoons many of us remember, and pushed against the idea that nerdy things or cartoons are children’s media that one has to grow out of. “It is an underlying belief throughout society, 100%—but I think it’s our generation that can look at animation and go, ‘Wait, why can’t it be for adults?'”

Castlevania is definitely a show for adults, with its extreme amount of gore and organs that go flying around. When I point out that it reminded me a lot of older animes, and it almost felt familiar, Shankar replies that it was intentional. “It was not being restricted by the rules of gravity, but also being able to ground it in a way that when you looked into the character’s eyes you feel like it’s an individual with emotions,” he says about the style.

“I hope this sparks more of these,” Shankar says of Castlevania‘s success and his hopes that it leads to other video game fans adapting stories. “There are so many great stories.”