Adele Broke Her Grammy Award in Half | The Mary Sue

During the 59th Annual Grammy Awards on Sunday night, Adele took home the award for Album of the Year much to the dismay of the Internet which believed Beyoncé should have won instead. Adele herself agreed, noting during her acceptance speech that Lemonade was “so monumental.”

“I can’t possibly accept this award, and I’m very humbled and very grateful and gracious, but my life is Beyoncé, and the album to me, the Lemonade album, Beyoncé, was so monumental and so well thought out…And so beautiful and soul bearing, and we all got to see another side of you that you don’t always let us see, and we appreciate that,” she said after beating her out for Record of the Year and Song of the Year in addition to Album of the Year.  The moment was made more special with a teary-eyed Beyoncé thanking her for the unexpected shoutout. 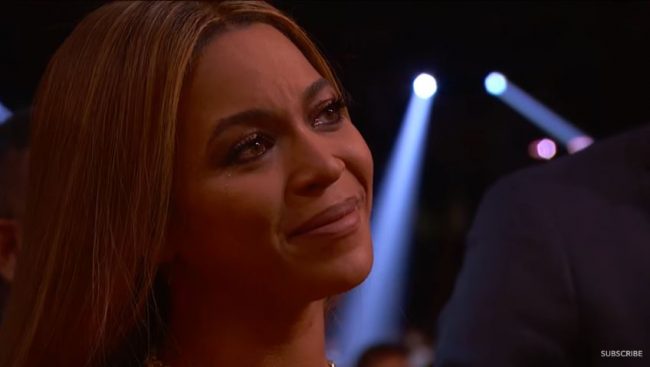 “All of us artists fucking adore you…You are our light. And the way that you make me and my friends feel, the way you make my black friends feel is empowering, and you make them stand up for themselves. And I love you. I always have. And I always will.”

According to Variety, she broke her award in half. While some say it was to symbolically share with the Lemonade singer in a moment that would channel Mean Girls, Jezebel reports that it was an accident. She quickly received a replacement.

(via Variety, image via screencap)