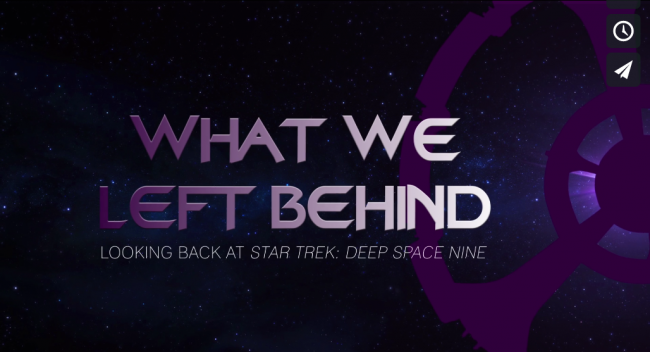 The official summary of the premise reads:

“Star Trek: Deep Space Nine first aired in January, 1993 well over a year after the death of Star Trek creator Gene Roddenberry. When compared to The Original Series and The Next Generation, Deep Space Nine was written off as too ‘dark,’ ‘edgy,’ and ‘the black sheep’ of the Star Trek family, a show that did not fit Roddenberry’s vision of the future. But someone was still watching as the show lasted seven seasons. Now, over twenty years later, fans all over the world are rediscovering Deep Space Nine and embracing the show with an enthusiasm rivaling the affection they feel for any other Star Trek series. Critics are even calling the show the Jewel in the Crown and the best of the Star Trek franchise. A devoted sci-fi fan might rightly ask themselves: ‘What the hell happened?'”

Nimoy previously produced and directed For the Love of Spock, a documentary about his late father Leonard Nimoy’s legacy and Star Trek role as Spock. For the Love of Spock was also crowdfunded, with a much higher ask of $600,000 on Kickstarter. Upon its release, it received almost universally positive reviews and currently holds a 74% score on Metacritic and a 100% score on Rotten Tomatoes.

What We Left Behind may end up being 90 minutes if it reaches its stretch goal of $250,000. (As of this writing, the Indiegogo has raised $234,713.) Cast and crew members who are involved include showrunner Ira Steven Behr, Nana Visitor (Kira), René Auberjonois (Odo), Alexander Siddig (Dr. Bashir), Terry Farrell (Dax), Michael Dorn (Worf), Colm Meaney (Miles O’Brien), Cirroc Lofton (Jake Sisko), Armin Shimerman (Quark), and many others.

(Via SyfyWire and People; image via screengrab)