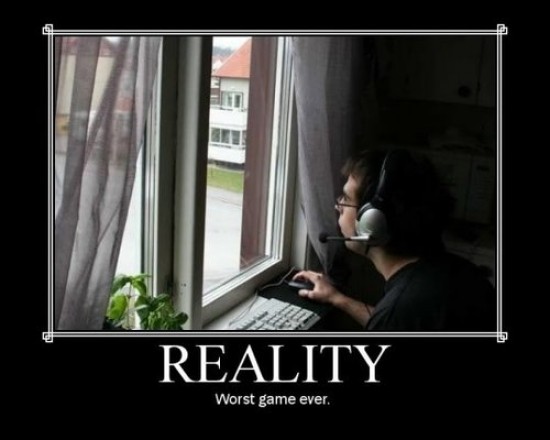 Though it might have only recently come to the attention of the mainstream media and received a level of unprecedented press over the past year or so, achievements and the methodology behind them have been in place for years now. It just happens that they’ve become increasingly attached to more positive behaviors. Even then, there’s some question as to just how positive this kind of “gamification” truly is.

The most evident form of this is the constant barrage of badges, achievements, gamerscore, trophies, completion rates and everything else that they’ve come up with to disguise what is essentially the same thing: An attempt to engage those using the product with arbitrary and digital goods that typically have no value beyond what we, as the players, assign to them. They are often assigned their own arbitrary numbers as well, depending on the platform, but someone at some point sat down and said, “This is worth a gold star and not a silver star.” Often as not, it’s meaningless.

At best, these achievements (or what have you) are vestiges symbolizing victory; they improve based on difficulty of the task at hand. At worst, they are a device being employed in a sort of behavioral economics experiment (as a somewhat related digression, multiplayer achievements are just the absolute worst). The designers seek a specific outcome and therefore create these goals in order to leave a trail of breadcrumbs along the route to whatever it is they are looking to accomplish. This can be positive, negative or a little bit of both. Regardless of intent, it is subversive and manipulative. There’s nothing to feel good about here.

This certainly gives some insight into Google’s approach to adding badges to their Google News services. Based on your reading habits, users will now be awarded badges. Remember above where it was noted that this is a ploy to further engage customers? Well, Google publically seems to be decrying this possibility by saying that they should not be used “to make your friends read more Google News out of a stupid, basal urge for competition.” And yet, when you start providing a series of arbitrary points, what else is there but competition?

And then again, there are certain benefits to setting these goals and daring people to meet them. For example, giving out badges or achievements to people who eat healthy or perform their daily hygiene isn’t exactly an evil to end all evils. But there’s also no real ability to regulate who truly is and is not doing these things versus someone who merely says they are. In addition, “gamification” may provide the desired results, but it has no way of dealing with the underlying issues at fault here. We shouldn’t be hailing our ability to collectively trick the population of the world into doing good deeds for worthless digital trinkets.

But there’s not a complete lack of hope here. Even in the dirty world of achievements and “gamification” there is still some interesting work being done. Jane McGonigal’s book, Reality Is Broken, comes to mind. It’s a stark, fresh and hopeful look at how we’re gaming, the ways it affects us and why we should strive to do more kinds of gaming with positive results. This kind of belief follows the idea that after so many repetitions of an action, it simply becomes ingrained. That this evokes images of dogs and bells is a nonissue; if it works, it works.

So here we are, in a world that’s constantly adding tiny goals to any user experience in order to more fully draw them in and engage them. Sometimes it’s just marketing and sometimes it’s more than that. Most of the time, though, it’s just a mire of misplaced devotion.