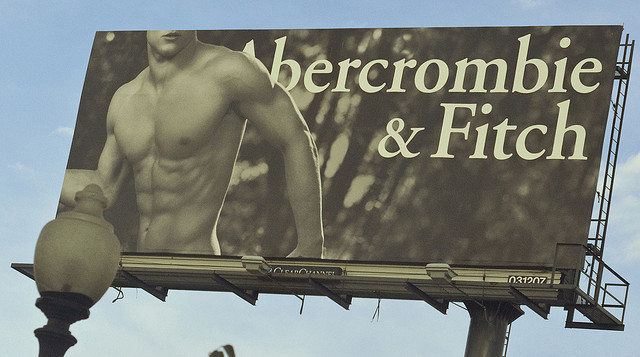 I feel like a weird part of my adolescence is leaving now that I won’t be seeing shirtless Abercrombie & Fitch advertisements everywhere. Growing up in Southern California, people carried their lunches in those shopping bags.

Executives told Women’s Wear Daily that their new campaign would move away from their signature images of shirtless monochrome teenagers. Instead, their plan will be “less sexual imagery and higher quality, more minimalist clothes.” Senior vice president of marketing Craig Brommers said:

We announced a number of changes a few months ago, which were based on our customer’s feedback. One of those changes was the elimination of sexualized imagery. As we evolve the brand in terms of product and marketing, making the consumer aware of these changes is important. Although we are still on a journey of change, we feel that we have made developments in our brand creative, and this shoot starring Neelam Gill has been a step forward for us.

A&F have been pretty strong in branding in the past, and not in a good way. There are a few things that immediately hit me when I think of A&F: dimly lit stores, classmates carrying bags with abs on them, shirtless store greeters, and not being in their target audience. Former CEO Mike Jeffries caught a ton of backlash for his comments that he refused to sell clothes in larger sizes because he wants to market his clothes to “cool, good-looking people.” After that, he issued an apology about how his words were interpreted wrongly. While they began selling plus-sized clothing in 2014 and replaced Jeffries last year, they haven’t been doing too well, closing roughly 300 stores.

It’s clear that A&F is trying to stay relevant and adapt, but this seems like a very small step. As a company that has a pretty bad representation for discriminatory hiring, being extremely narrow in their representations of different body types and races, sexualizing young girls, and establishing themselves as the uniform for a specific elite, they might need to do more to rebrand themselves.

Still, that’s just my take as someone who never really wore any A&F, and is obviously a bit cynical toward the whole thing. Neelam Gill is lovely, and there’s a chance this could go very well for them. What do you think?