A LOT Happened on the Most Recent Legends of Tomorrow

Including a Supernatural crossover 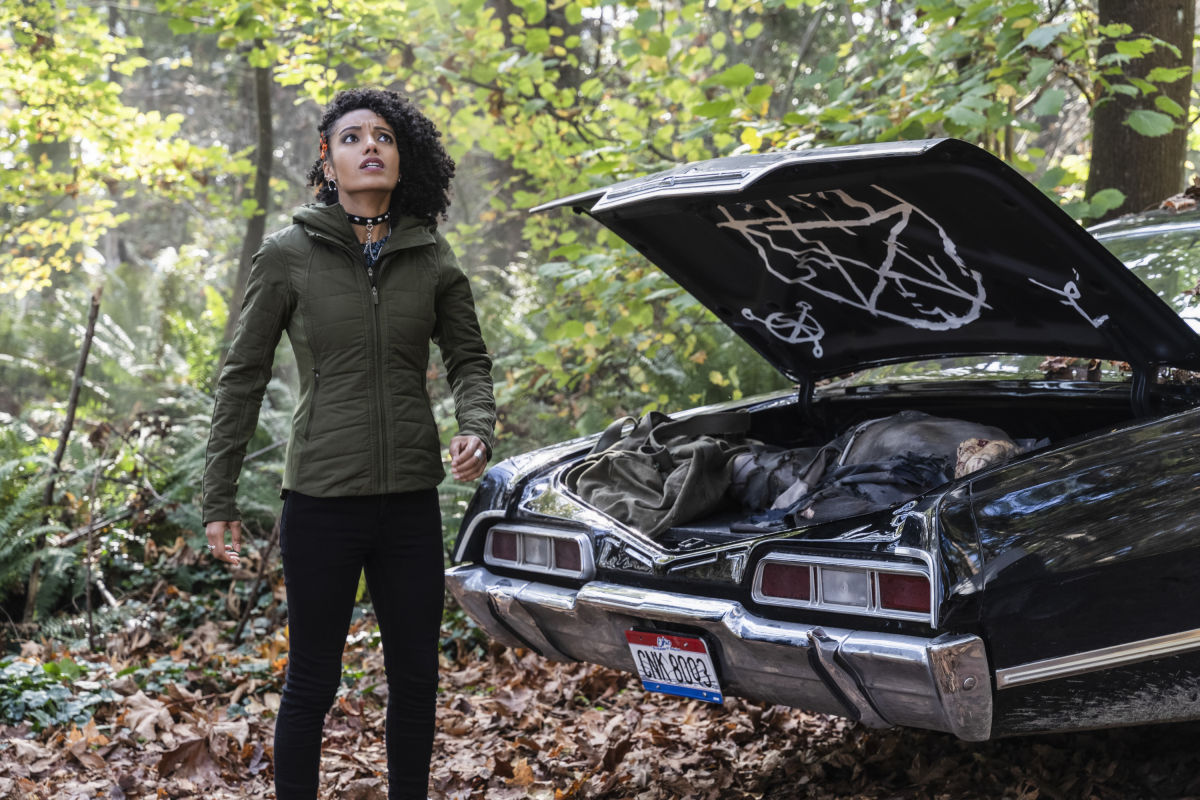 After new episodes were delayed thanks to coronavirus, the CW has gifted us with a new installment of Legends of Tomorrow and, even with a time machine, they managed to pack A LOT into one hour of TV—including multiple almost-deaths, an entire parent-child relationship and a few gods. Oh, and they also had a sneaky crossover with Supernatural because why not.

In “Zari Not Zari” as the main crew of the Waverider continued the search for pieces of the Loom of Fate, with Constatine running off on his own to find a piece in British Columbia, where Sara and Charlie followed him. In a funny bit of inside humor, they stumbled on the set of Supernatural (which, like Legends, films in BC and in fact films next door to legends), and Sara revealed that Dean is her “hall pass.” Nice.

The trio didn’t get much time for set stalking, despite meeting the real star of the series, the Impala. No, they were chased down by Atropos, Charlie’s very scary big fate sister who could melt people from the inside by showing her true form, and was a shapeshifter like Charlie. She nearly killed Constantine and seemed to kill Sara, and for a second, she had two pieces of the loom of fate within her grasp when she got on to the Waverider.

While this was happening, other members of the crew searched for connections to lives they should have or did live in other timelines. The first was Rory, who with the help of Ava, attempted to show up for his newly discovered daughter, Lita, in her past. It was so sweet to see Heatwave trying to be a dad, but it turns out being a parent is about more than being there for the “highlight reel.”

Zari, or Zari 2.0 as we’ve been calling this new version of her, decided it was time to get to the bottom of the other version of herself she’d been haunted by, and thanks to some convenient psychotropic drugs and the family air totem she got her wish. Zari 2.0 entered the air totem and got to meet the old Zari, who assured Zari 2.0 that she wasn’t cooler. Seeing Zari prime find out that Behrad and her parents were alive and happy was so moving, and I just loved Tala Ashe’s acting throughout the whole episode.

But that set things up for some major pain, as Atropos found Behrad on the Waverider. I’ll admit that I was pretty sure Behrad was going to die the moment Zari prime found out she’d saved him, but that didn’t make it hurt any less when Atropos cut his thread. It might not have landed, since two characters had already “died” in the episode, but the reactions of his fellow Legends to Behrad’s death made it seriously hurt. And it helps that Shayan Sobhian has integrated so well into the cast this season.

This episode sets things up in a very interesting way for the rest of the season, especially for Zari as she attempts to find the Loom of Fate to save Behrad and bring him back, and that will matter even more because that’s what the “old Zari” basically gave up her existence for. And it will also be interesting to find out exactly why Sara didn’t die when she saw Atropos’ true form. My theory: she’s a paragon that saw the creation of all of reality, so she can handle a little goddess.

And here’s one very random piece of trivia to close us off. In the episode, the Loom of Fate basically kills most of the crew of Supernatural, which leaves no one to finish season fifteen. But it’s interesting that Legends crossed over with Supernatural for this story, since in season six Sam and Deal found themselves in an alternative timeline, dealing with a changed world, as the Legends often do. In the season six episode “My Heart Will Go On” the Angel Balthazar changes history by saving the Titanic from sinking. And who does he piss off doing that? The fate Atropos! Probably a coincidence, but a very fun one.

All in all, this was another great episode of a show that I’m so happy to have back in these dark times, and I can’t wait to see what weird places they go next week.