British Tabloids Publish Nudes of the Female Doctor Who and Holy Crap, What’s Happening? We’re Being Invaded By Some Kind of—”EXTERMINATE!” 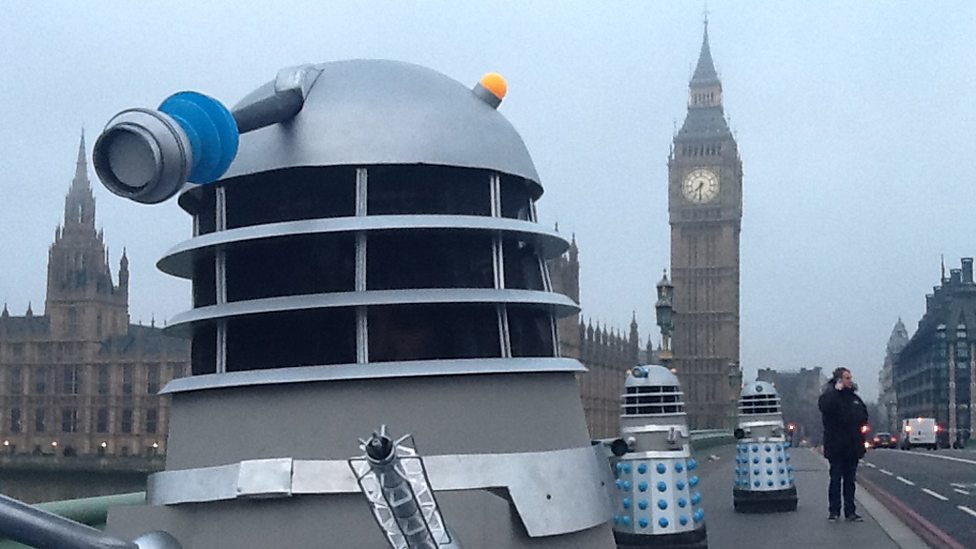 I don’t know how long I’ll have to type. Earth is under attack by the Daleks and they’ve already taken out the power grid in New York City. I’m running my computer on battery power and will post this via a wifi network generated from my phone. Things are looking bleak. If you can read this right now, pray for us.

The Dalek that burst into The Mary Sue office says it’s a representative of its race, sent to explain the reason for this current invasion. They want to get their message broadcast to the widest audience possible. I suggested that Facebook HQ was just a few blocks away but the Dalek told me they liked my American Gods recaps, which is oddly flattering. I’m pretty sure I’m going to die soon, but at least I’ll be transmitting important information to the people of Earth as my last act.

Below is a live transcript of my conversation with the Dalek currently rolling around The Mary Sue office.

KHS: I’m seeing on Twitter that Staten Island has been completely destroyed.

Dalek: THAT WAS YOUR WARNING. NO ONE CARED FOR STATEN ISLAND.

KHS: You said there’s a specific reason for this invasion?

Dalek: YOUR NEWS OUTLETS COMPILED AND PUBLISHED NAKED PICTURES OF THE DOCTOR. UNACCEPTABLE! HUMANITY WILL BE EXTERMINATED.

(I can hear many Daleks in the hallway beyond, all chanting “EXTERMINATE!” Screams echo from adjacent offices. I’m afraid we’ve lost the architectural firm next door.)

KHS: But you … don’t the Daleks hate the Doctor?

Dalek: SHE IS OUR MORTAL ENEMY.

Dalek: EVEN WE, THE DALEKS, HAVE MORE RESPECT FOR THE DOCTOR THAN YOUR EARTH TABLOIDS. IF YOU ATTACK THE DOCTOR, YOU LESSEN THE FUTURE VICTORY OF THE DALEKS AGAINST HER.

Dalek: WE WILL DESTROY THE DAILY MAIL AND THE SUN NEWSPAPERS FOR WHAT THEY HAVE DONE TO THE DOCTOR! EXTERMINATE THE PROPERTIES OF THE ONE THEY CALL RUPERT MURDOCH!

KHS: Honestly, you’d be doing us a favor.

KHS: I’m just saying, if you were to eliminate The Daily Mail, you’d be heroes around here.

KHS: Right. Their New York office is right downtown at Astor Place. You could just hop on the D train and you’ll be there in no time.

Dalek: THAT INFORMATION IS APPRECIATED.

KHS: No problem. Happy to help.

Dalek: YOU WILL ALSO BE EXTERMINATED.

KHS: Yeah, I figured. But if I can expedite the collapse of Rupert Murdoch’s empire I’ll die with a sense of accomplishment.

Dalek: FIRST YOU WILL EX-PLAIN WHY YOUR MEDIA AND CITIZENS HAVE EX-PRESSED HATRED OF THE NEW DOCTOR. WHY WOULD THEY PUBLISH PICTURES OF THE DOCTOR WITHOUT HER CLOTHING? THEY DID NO SUCH THING WITH PRIOR DOCTORS.

Dalek: PURE DALEKS HAVE NO GENDER.

Dalek: THIS REASONING IS INSUFFICIENT. GENDER IS AN INSUFFICIENT CAUSE TO ATTACK THE DOCTOR.

KHS: I’m right there with you, pal.

KHS: I don’t suppose you’re recruiting for the Daleks? I’d be interested in exploring that option.

Dalek: ALL EMOTIONS ARE ELIMINATED WHEN WE BECOME DALEK. ALL WE FEEL IS HATE!!!

KHS: Funny thing, that’s what reading the news has done to me, too. Who do I talk to about joining you?

I seem to have thrown my Dalek for a bit of a loop and bought myself some time. While they contact their leaders about my situation, I’m taking the time to get this desperate communication out to the people of Earth.

The reason we’re about to be exterminated as species can squarely be blamed on our gross tabloid culture, which frankly I’ve long seen coming. Rupert Murdoch’s rags and their besmirching of the lady Doctor Who has ended life on this planet as we know it. And no, I won’t waste what might be my last breaths in linking to their trash. While I have this final chance I’ll tell my truths and speak truth to the powers that be and I’ll