Mary Sue contributor Mike Chen is making waves in the world of science fiction. Mike’s first novel, the time-travel trip Here and Now and Then, received glowing reviews and was a TMS book club pick. We’re excited to give you a sneak peek at his next novel, A Beginning at the End, with an exclusive cover reveal and excerpt to whet your appetite for this post-apocalyptic adventure.

A Beginning at the End is forthcoming on January 14, 2020 from MIRA Books, but you’ll see its cover here first. Shall we? 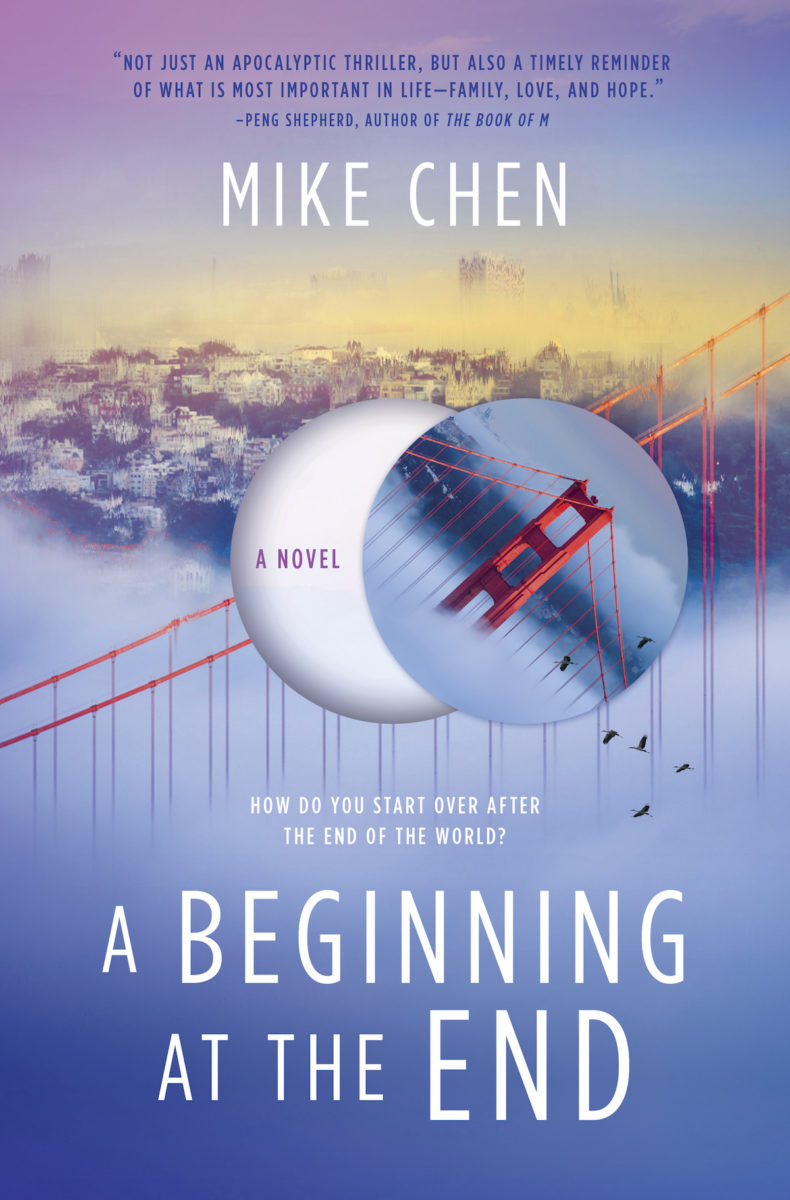 And just what’s in store for you after the End of the World?

Six years after a global pandemic, it turns out that the End of the World was more like a big pause. Coming out of quarantine, 2 billion unsure survivors split between self-governing big cities, hippie communes, and wasteland gangs. When the father of a presumed-dead pop star announces a global search for his daughter, four lives collide: Krista, a cynical event planner; Moira, the ex-pop star in hiding; Rob, a widowed single father; and Sunny, his seven-year-old daughter.

As their lives begin to intertwine, reports of a new outbreak send the fragile society into a panic. And when the government enacts new rules in response to the threat, long-buried secrets surface, causing Sunny to run away seeking the truth behind her mother’s death. Now, Krista, Rob, and Moira must finally confront the demons of their past in order to hit the road and reunite with Sunny—before a coastal lockdown puts the world on pause again.

OK, so you’re in. Let’s get to reading right this very moment.

People were too scared for music tonight. Not that MoJo cared.

Her handlers had broken the news about the low attendance nearly an hour ago with some explanation about how the recent flu epidemic and subsequent rioting and looting kept people at home. They’d served the news with high-end vodka, the good shit imported from Russia, conveniently hidden in a water bottle which she carried from the greenroom to the stage.

“The show must go on,” her father proclaimed, like she was doing humanity a service by performing. She suspected his bravado actually stemmed from the fact that her sophomore album’s second single had stalled at number thirteen—a far cry from the lead single’s number-one debut or her four straight top-five hits off her first album. Either way, the audience, filled with beaming girls a few years younger than herself and their mothers, seemed to agree. Flu or no flu, some people still wanted their songs—or maybe they just wanted normalcy—so MoJo delivered, perfect note after perfect note, each in time to choreographed dance routines. She even gave her trademark smile.

The crowd screamed and sang along, waving their arms to the beat. Halfway through the second song, a peculiar vibe grabbed the audience. Usually, a handful of parents disappeared into their phones, especially as the flu scare had heightened over the past week. This time nearly every adult in the arena was looking at their phone. In the front row, MoJo saw lines of concern on each face.

Before the song even finished, some parents grabbed their children and left, pushing through the arena’s floor seats and funneling to the exit door.

MoJo pushed on, just like she’d always promised her dad. She practically heard his voice over the backup music blasting in her in-ear monitors. There is no sophomore slump. Smile! Between the second and third songs, she gave her customary “Thank you!” and fake talk about how great it was to be wherever they were. New York City, this time, at Madison Square Garden. A girl of nineteen embarking on a tour bigger, more ambitious than she could have ever dreamed and taking the pop world by storm, and yet, she knew nothing real about New York City. She’d never left her hotel room without chaperones and handlers. Not under her dad’s watch.

One long swig of vodka later, and a warmth rushed to her face, so much so that she wondered if it melted her face paint off. She looked off at the side stage, past the elaborate video set and cadre of backup dancers. But where was the gaffer? Why wasn’t anyone at the sound board? The fourth song had a violin section, yet the contracted violinist wasn’t in her spot.

Panic raced through MoJo’s veins, mental checklists of her marks, all trailed by echoes from her dad’s lectures about accountability. Her feet were planted exactly where they should be. Her poise, straight and high. Her last few notes, on key, and her words to the audience, cheerful. It couldn’t have been something she’d done, could it?

No. Not her fault this time. Someone else is facing Dad’s wrath tonight, she thought.

The next song’s opening electronic beats kicked in. Eyes closed, head tilted back, and arms up, her voice pushed out the song’s highest note, despite the fuzziness of the vodka making the vibrato a little harder to sustain. For a few seconds, nothing existed except the sound of her voice and the music behind it— no handlers, no tour, no audience, no record company, no father telling her the next way she’d earn the family fortune—and it almost made the whole thing worth it.

Her eyes opened, body coiled for the middle-eight’s dance routine, but the brightness of the house lights threw her off the beat. The drummer and keyboard player stopped, though the prerecorded backing track continued for a few more seconds before leaving an echo chamber.

No applause. No eyes looked MoJo’s way. Only random yelling and an undecipherable buzz saw of backstage clamor from her in-ear monitors. She stood, frozen, unable to tell if this was from laced vodka or if it was actually unfolding: people—adults and children, parents and daughters— scrambling to the exits, climbing over chairs and tripping on stairs, ushers pushing back at the masses before some turned and ran as well.

Someone grabbed her shoulder and jerked back hard. “We have to go,” said the voice behind her.

“What’s going on?” she asked, allowing the hands to push her toward the stage exit. Steven, her huge forty-something bodyguard, took her by the arm and helped her down the short staircase to the backstage area.

“The flu’s spread,” he said. “A government quarantine. There’s some sort of lockdown on travel. The busing starts tonight. First come, first serve. I think everyone’s trying to get home or get there. I can’t reach your father. Cell phones are jammed up.”

They worked their way through the concrete hallways and industrial lighting of the backstage area, people crossing in a mad scramble left and right. MoJo clutched onto her bottle of vodka, both hands to her chest as Steven ushered her onward. People collapsed in front of her, crying, tripping on their own anxieties, and Steven shoved her around them, apologizing all the way. Something draped over her shoulders, and it took her a moment to realize that he’d put a thick parka around her. She chuckled at the thought of her sparkly halter top and leather pants wrapped in a down parka that smelled like BO, but Steven kept pushing her forward, forward, forward until they hit a set of double doors.

The doors flew open, but rather than the arena’s quiet loading area from a few hours ago, MoJo saw a thick wall of people: all ages and all colors in a current of movement, pushing back and forth. “I’ve got your dad on the line,” Steven yelled over the din, “His car is that way. He wants to get to the airport now. Same thing’s happening back home.” His arm stretched out over her head. “That way! Go!”
They moved as a pair, Steven yelling “excuse me” over and over until the crowd became too dense to overcome. In front of her, a woman with wisps of gray woven into black hair trembled on her knees. Even with the racket around them, MoJo heard her cry. “This is the end. This is the end.”

People had been making cracks about the End of the World since the flu changed from online rumors to this big thing that everyone talked about all the time. But she’d always figured the “end” meant a giant pit opening, Satan ushering everyone down a staircase to Hell. Not stuck outside Madison Square Garden.

“Hey,” Steven yelled, arms spread out to clear a path through the traffic jam of bodies. “This way!”

MoJo looked at the sobbing woman in front of her, then at Steven. Somewhere further down the road, her father sat in a car and waited. She could feel his pull, an invisible tether that never let her get too far away.

“The end, the end,” the sobbing woman repeated, pausing MoJo in her tracks. But where to go? Every direction just pointed at more chaos, people scrambling with a panic that had overtaken everyone in the loading dock, possibly the neighborhood, possibly all New York City, possibly even the world. And it wasn’t just about a flu.

But… maybe that was good?

No more tours. No more studio sessions. No more threats about financial security, no more lawyer meetings, no more searches through her luggage. No more worrying about hitting every mark. In the studio. Onstage.

All of that was done.

If this was the end, then she was going out on her own terms.

“Steven!” she yelled. He turned and met her gaze.

She twisted the cap off the water-turned-vodka bottle, then took most of it down in one long gulp. She poured the remainder on her face paint, a star around her left eye, then wiped it off with her sleeve. The empty bottle flew through the air, probably hitting some poor bloke in the head.

“Tell my dad,” she said, trying extra hard to pronounce the words with the clear British diction she was raised with, “to go fuck himself.”

For an instant, she caught Steven’s widemouthed look, a mix of fear and confusion and disappointment on his face, as though her words crushed his worldview more than the madness around them. But MoJo wouldn’t let herself revel in her first, possibly only victory over her father; she ducked and turned quickly, parka pulled over her head, crushing the product-molded spikes in her hair.

Each step pushing forward, shoulders and arms bumping into her as her eyes locked onto the ground, one step at a time. Left, right, left, then right, all as fast as she could go, screams and car horns and smashing glass building in a wave of desperation around her.

Maybe it was the end. But even though her head was down, she walked with dignity for the first time in years, perhaps ever.

Excerpted from A Beginning at the End by Mike Chen, Copyright © 2020 by Mike Chen. Published by MIRA Books.

A Beginning at the End heads your way in January of 2020. 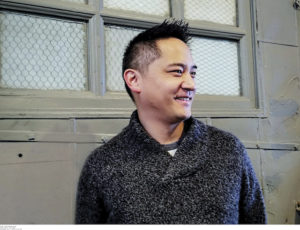 Mike Chen is a lifelong writer, from crafting fan fiction as a child to somehow getting paid for words as an adult. He has contributed to major geek websites (The Mary Sue, The Portalist, Tor) and covered the NHL for mainstream media outlets. A member of SFWA and Codex Writers, Mike lives in the Bay Area, where he can be found playing video games and watching Doctor Who with his wife, daughter, and rescue animals. Follow him on Twitter and Instagram: @mikechenwriter