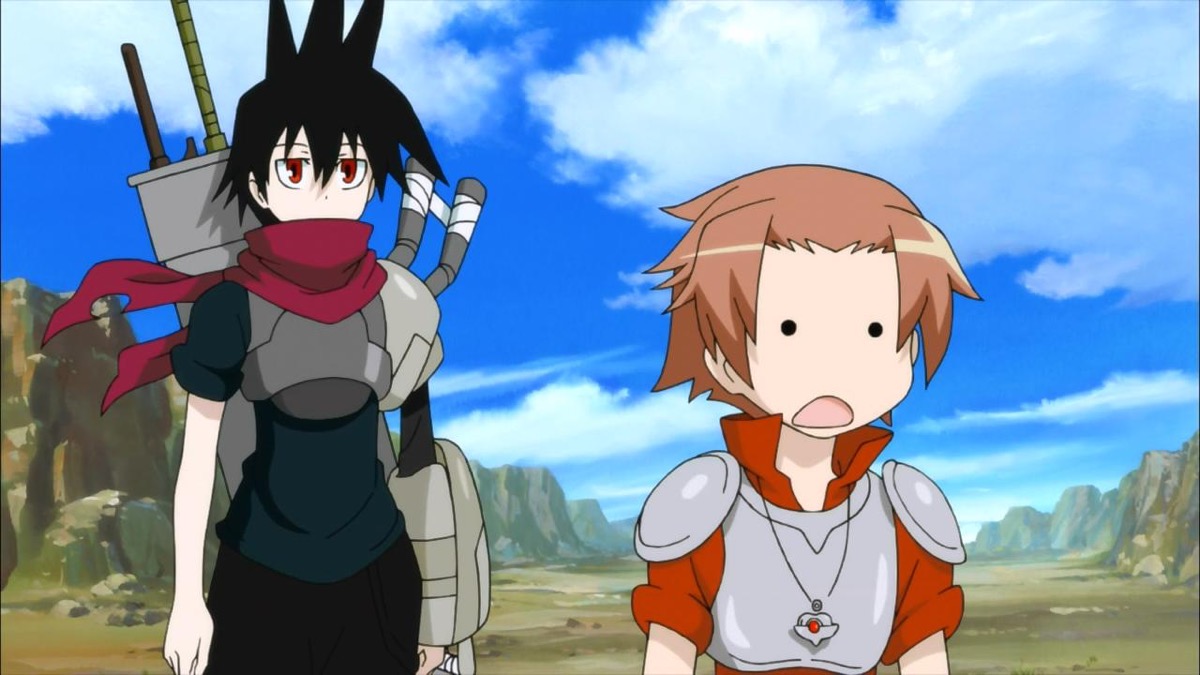 Parody in Japanese anime is nothing new. From eccentric combat moves to overly exaggerated facial expressions, anime has made a name for itself in the humor department, amplifying the human experience to an almost ridiculous level. It’s easy to see why the genre has gained a popular following, and equally easy to understand why some find TV shows like Dragon Ball Z, One Piece, Fairy Tail, and No Game No Life difficult to take seriously.

That’s why there are even anime made for those who like making fun of anime, the shows’ comedic humor centering around anime tropes such as characters’ brightly colored hair and how one “hand chop” can kill a man.

Though these parody anime skyrocketed in the early 2000s, western watchers might have a hard time finding the diamond in the rough, since many parody anime, such as Love Star and  Binan Koukou Chikyuu Bouei-bu LOVE!, can seem slow-moving or difficult to understand for those who aren’t well-versed in older anime, traditional manga styles, or who haven’t grown up living in Japan. But, more recently, some anime has begun to surface that knows exactly how to make fun of itself, with humor that is universally understood. 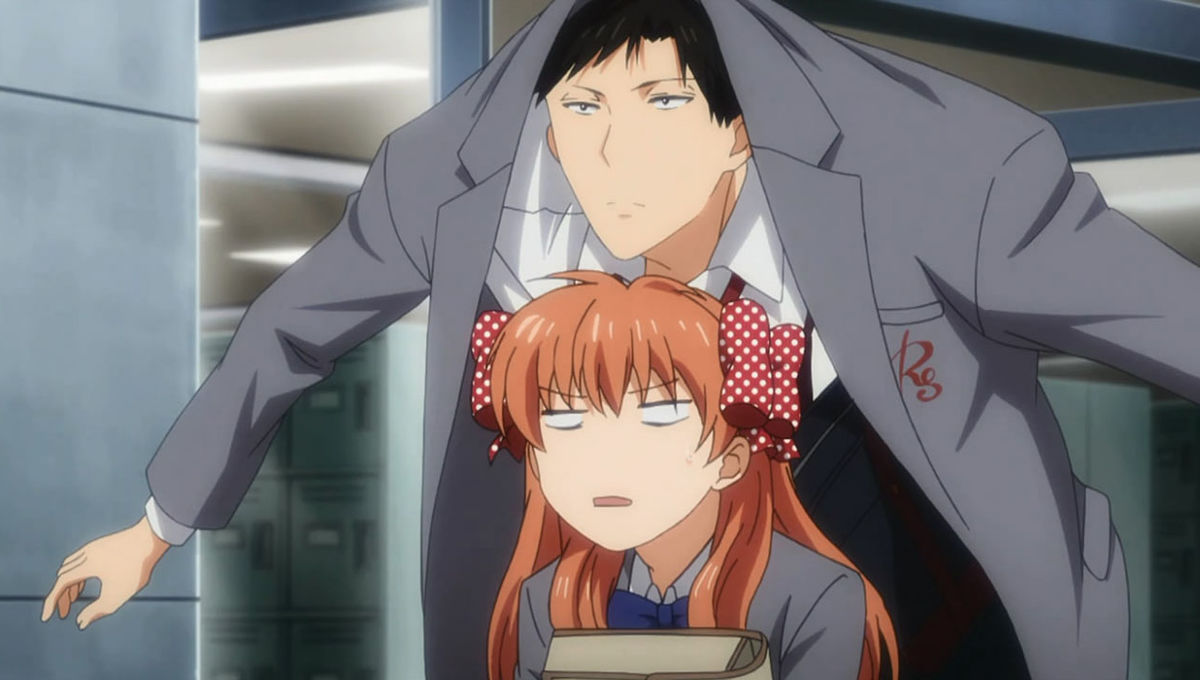 When it comes to comedy, there are few better landscapes to play with than a romance story.

Preppy high schooler Chiyo Sakura finally gathers up the courage to confess her feelings to tall, quiet, and handsome Umetarou Nozaki, her longtime crush. The problem is that, after Chiyo has tightened her red hair bows and dusted off her skirt, she accidentally blurts out that she’s Nozaki’s “biggest fan.” Greatly misunderstanding her advances, Nozaki gives Chiyo his autograph.

Already mortified, Chiyo is even more surprised to discover that Nozaki is the famous “Miss Nozaki,” Chiyo’s favorite manga artist. By a strange turn of events, Chiyo becomes Nozaki’s illustration assistant, all the while trying to win the heart of the boy who doesn’t know virtually anything about romance.

Released in 2014, this 12-episode anime has it all, from flamboyant mood swings to hysterical romantic let-downs. It’s tough being 16 years old, and while we feel for Chiyo, her ongoing humiliation—which steers away from typical starry-eyed romance anime—makes for excellent entertainment. 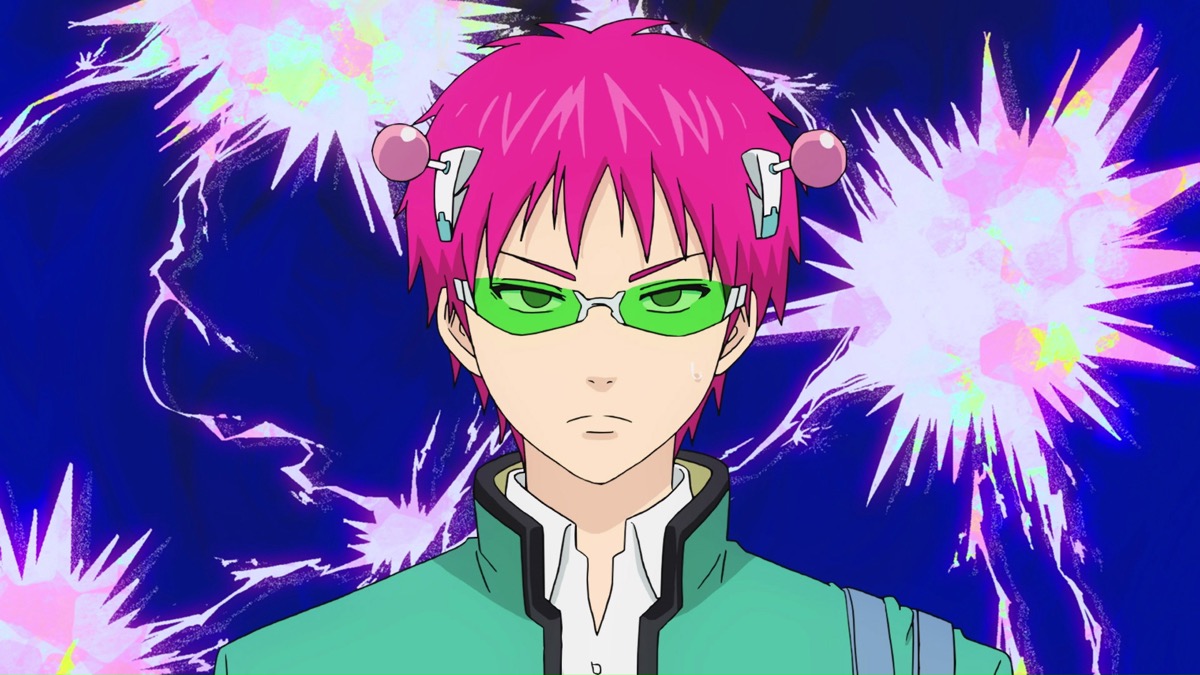 2. The Disastrous Life of Saiki K.

A pink-haired skeptic of a high-schooler with a plethora of psychic abilities, who has nothing but criticism to give to his fellow classmates, seems like the perfect protagonist for any anime parody. Kusuo Saiki was born with telepathy, psychokinesis, teleportation, and various other superpowers. Most people might find that pretty jaw-dropping, but not in the case of Saiki’s sickeningly adoring parents, who seem to have no problem leaving the heavy-lifting chores to their son.

While Saiki has plenty of his sharp wit to spread around at home, his efforts at school are less focused on academics or rolling eyes at his classmates than they are centered around keeping his powers a secret. This proves especially difficult in gym class when Saiki almost accidentally kills two kids playing dodgeball using superhuman strength, or when using his teleportation powers to avoid Kokomi Teruhashi, a self-proclaimed “perfect pretty girl” who has set her sights on Saiki. 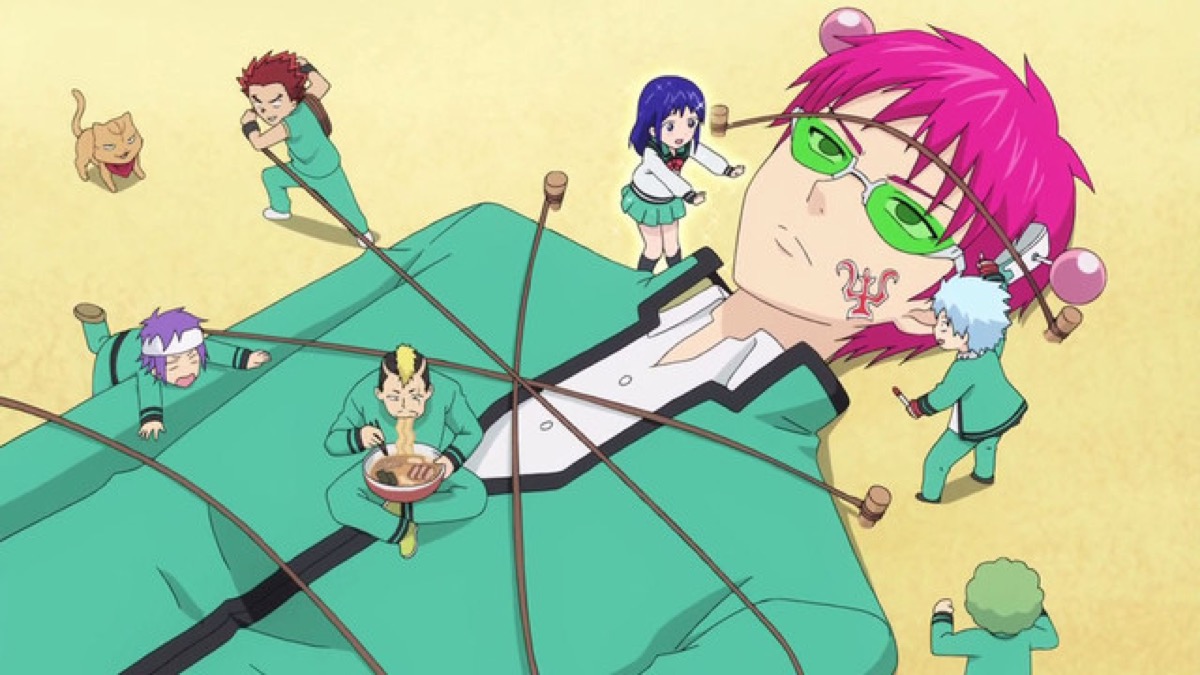 With the impossibly quick and sarcastic comebacks, the constant mockery of typical anime tropes, and characters that are convinced they’re part of a super secret magical society called “Dark Reunion,” it’s no surprise that The Disastrous Life of Saiki K. has two seasons under its belt. This is a show made for people who are less interested in romance and more inclined to wonder how one child would use mind control to convince all anime characters they can do things real-life humans can’t. 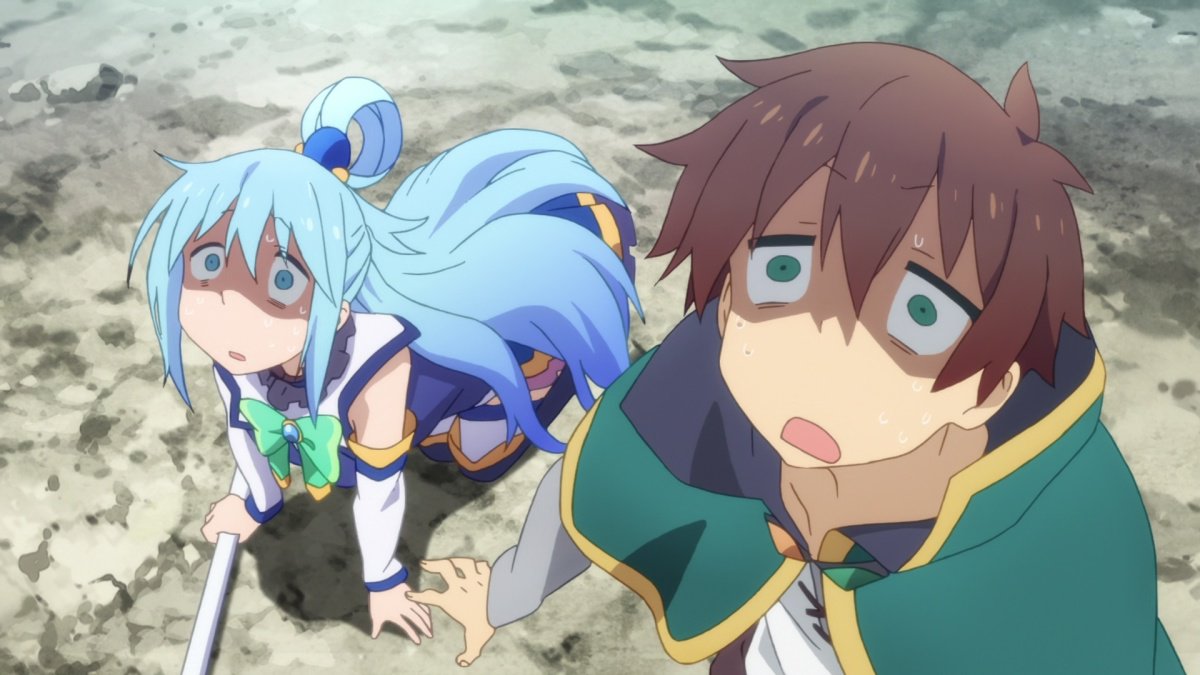 Fantasy adventures and gamer quests are where it’s at for many fans of anime, but while some live for the dramatic sword fighting and the elegant fairyland goddesses, others live for pointing out the ridiculousness of characters whisked away to fight demons in a magical land who become heroes adored by all who cross their path. Konosuba rides on the coattails of that hilarity.

After dying of shock attempting to save a girl from a slow-moving tractor, teenage NEET Kazuma Satou is met by the beautiful and condescending goddess Aqua. She gives Kazuma the choice to enter heaven or reincarnate into a gamer’s fantasy world paradise. Obviously, Kazuma chooses the latter, kidnapping the goddess on his way as payback for her sarcastic comments.

It turns out, the goddess is completely useless, and the two party members Kazuma attracts aren’t much help, either—one obsessed with demolishing the world and the other far too keen on throwing herself on death’s door. Between paying living expenses and keeping his teammates from dying, Kazuma has his work cut out for him, much to all viewers’ benefit.

Senyu, at first, begins like any other hero-quest anime, with the main character, Alba, epically slicing through a menacing, albeit small, jelly monster. About 10 seconds later, his soldier companion, Ross, appears on the scene to make fun of Alba for his “creepy heavy breathing” and offers no help to Alba has he fights off a yellow giraffe that threatens to crush the hero with its weight.

Apparently, many years ago, a hole randomly appeared in the earth and monsters emerged to terrorize the lands. So, naturally, the king appointed many, many “probable” descendants of a once legendary hero to fight off these monsters and earn an honorable title. There might be numerous holes in the story, but regardless, Alba and Ross set off to fight as many demons as they can, provided that there’s no line for black bean buns and Ross doesn’t jokingly stab Alba on their way to the next adventure.

Unlike most western television today, anime has retained its theme of short and sweet episodes, most maxing out at 25 minutes, but we give Senyu even more props for taking its comedy bits and smashing them all together masterfully in 5-minute episodes. Imagine a longer-framed version of an ASDFmovie that often breaks the fourth wall. 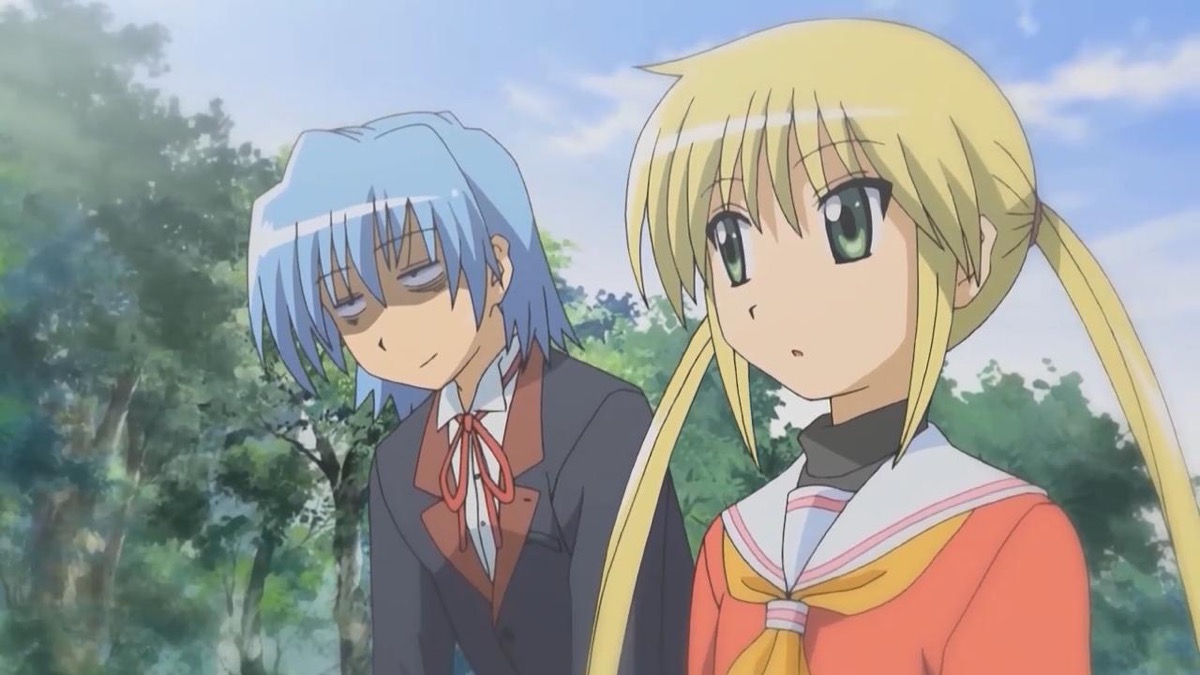 Of course, there are some older anime parody shows that deserve some recognition. Hayate the Combat Butler aired back in 2007, but its comedy, while a little dark and unfortunate, is pretty timeless and earned the show not one, but four seasons.

The anime starts off with a young Hayate Ayasaki being told by Santa Claus that only rich kids get presents on Christmas because one has to work hard to get nice things in this world. For those who think that’s a bit of a “yikes,” the story continues with Hayate having to go on the run because his parents have spent all their money and left the debt in their underage son’s capable working hands. Told by his right-shoulder angel to make the “necessary evil” decision to kidnap rich girl Nagi Sanzenin for ransom money, Nagi misinterprets the encounter and recruits Hayate to be her new butler.

While the first episode might seem to draw a little too much comedy from Hayate’s truly heartbreaking misfortunes, the show’s witty narrator, totally absurd bicycle action scenes, and lovable-but-bratty heroine makes this unapologetically funny anime 100 percent worth the watch. 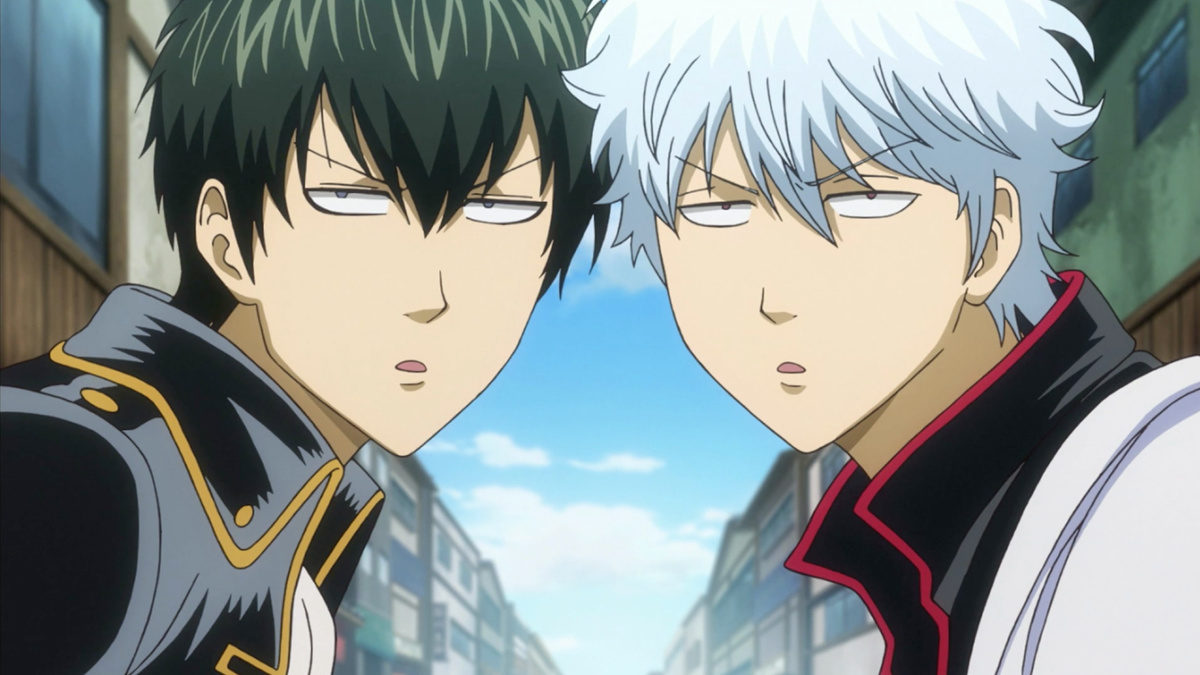 Gintama is the Fairy Tail of parody anime, with over 300 episodes to its name, plus a 2015 reboot. Poking fun at the samurai anime genre and about a dozen other anime, Gintama tries to fit as many characters and jokes as possible into each episode.

When he’s not busy picking his nose or fleeing from a fight, the show’s outlandish main character Gintoki Sakata might remind viewers a little bit of Inuyasha, or Ichigo from Bleach. The show’s setting is Feudal-era Japan—that is, when it’s not futuristic Japan with flying cars and aliens. Despite the ban on swords, Gintoki and his fellow samurai try to make the most of the bipolar society, taking odd jobs like finding stray cats to help pay rent. It looks like there’s a little Noragami mixed in there too.

Though the show first aired in 2005, Gintama clearly knew how to stand the test of time, mocking shounen anime’s most classic tropes—such as making fight scenes less complicated, extremely short, and even arguably pathetic to make life a little easier for the anime artist. Gintama combines themes from some of the most popular anime (like Samurai X), only to turn back around and mercilessly make fun of the ideas they borrowed. It might mostly be fun and games, but Gintama also uses its comedy platform to highlight subjects like social equality. There’s always room for surprises.

Are there any other parody anime that we may have missed? Let us know if there are any other comedy diamonds in anime we should know about!