5 Ways the Universe Helped my Anxiety | The Mary Sue

5 Ways the Universe Helped My Anxiety

AKA we are but specks of dust … what a relief.

(via Greg Rakozy on unsplash)

This piece was originally published on Medium. It has been republished here with permission.

Written while listening to “The Galaxy Song”  by Monty Python.

So … I’m an anxious person. Like, super anxious. So anxious that it took me 10 minutes to start this article, because I wanted to do it “the right way.”

And for some reason, the thing that’s helped me the most wasn’t a therapist telling me I’d be alone forever. It was reading up on quantum/theoretical/astrophysics.

Maybe it’s because they open the mind to new possibilities. Maybe they put things in perspective. Maybe they’re so confusing to the peasant human that you literally can’t think about anything else while you read about them.

Whatever reason it is, let’s start off light: 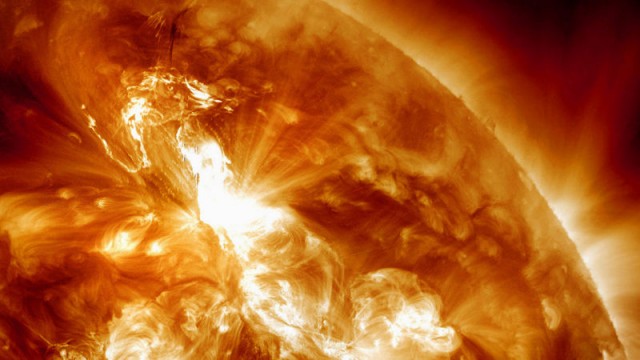 How relaxing. (via NASA)

The Sun Dying
We’ve only got 8 minutes to save the world!

When you look up at the sun (don’t look at the sun, you masochist), you’re technically looking into the past. Sunlight takes about 8 minutes and 20 seconds to reach earth. So if someone tells you to stop living in the past, just go, “NONE OF US CAN!” before they offer you a Snickers because “you get a little existential crisis-y when you’re hungry.”

I was trying to escape my brainsanity by listening to a RadioLab podcast with Neil deGrasse Tyson (🙏). He talks about how, if the sun disappeared, we wouldn’t know about it for 8 minutes and 20 seconds, but when asked if, in that short time, he’d want to know that the end was nigh? He said, “Pfft, no!” 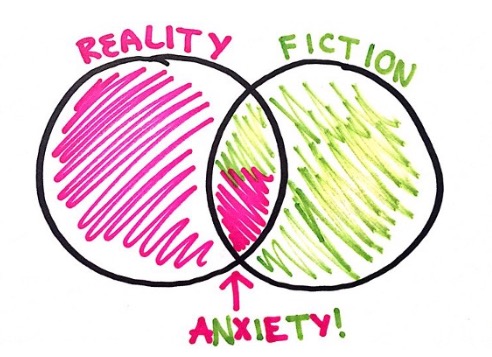 My anxiety does this fun thing where I think about the what ifs and various scenarios until they become fictional reality in my head. “What if I’m not doing a good enough job at work?” “What if I’m pregnant (even though I didn’t have sex)?” “What if this dude is talking to some other chick?” Soon, I’m so anxious that I literally can’t think about anything else.

He may have been talking about a “the end is nigh” scenario, but what Neil deGrasse said put things into perspective. Worrying about a hypothetical doesn’t change it. It just freezes you.

Imagine this: There’s a cat in a box. Inside the box with the cat is radioactive material that, if emitting radiation, will kill the cat. If not, the cat will be fine. So … is the cat alive or dead?

Just like Neil deGrasse Tyson saying, “Don’t sweat what ya don’t know,” Schrödinger’s Cat is kind of awesome to apply to life’s unknowns. Instead of letting your psyche psych you out about “what ifs,” just assume whatever you’re worried about is both true and untrue until the Universe decides.

Nihilism
AKA the Debbie Downer of philosophy.

Nihilism | noun | the belief that nothing matters and that your entire existence is meaningless and futile.

“Nothing matters” seems like a philosophy that’s less calming and more worthy of staring at the ceiling all night because what’s even the point.

But the whole “nothing matters” philosophy can actually be weirdly … comforting. Because if nothing really matters, it’s a lot easier to sit back and chill out about things that aren’t worthy of freaking out about.

The key: a pinch of nihilism rather than a mouthful. Otherwise, cue staring at ceiling, “What’s the point,” etc. 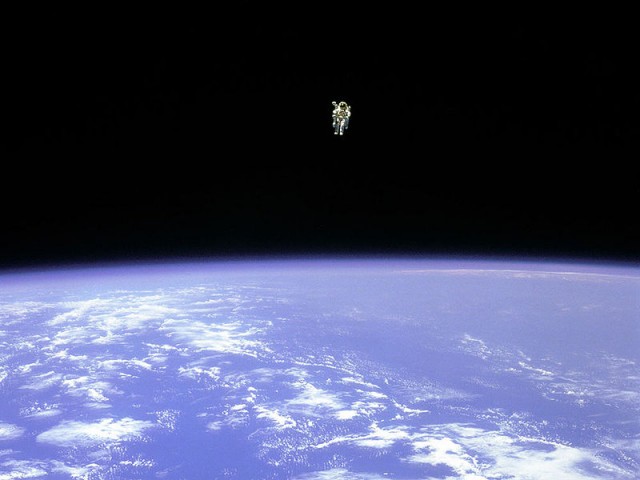 Courtesy of NASA
The Overview Effect

All it takes is getting away from it all … like literally as far away as possible.

If Nihilism is the goth kid, the Overview Effect is its equally deep cousin who smiles a lot more.

Astronauts who have looked back at the blue marble floating in space have reported a shift in perspective—a greater clarity, a realization that everything we are and know is fragile. This cognitive shift is called “The Overview Effect.”

It must be strange looking back at Earth from space. Earth is the YOU ARE HERE of our existence—the only one we’ve got—and floating outside of it and looking back at the place where all our worries, joys, tears, and troubles are must make all of our daily worries seem trivial and small.

Whenever I would start worrying about little things that gripped me in a big way, I would just sit back and try to think about what those Astronauts must have felt, floating outside everything humans have ever known … plus wine never hurt. 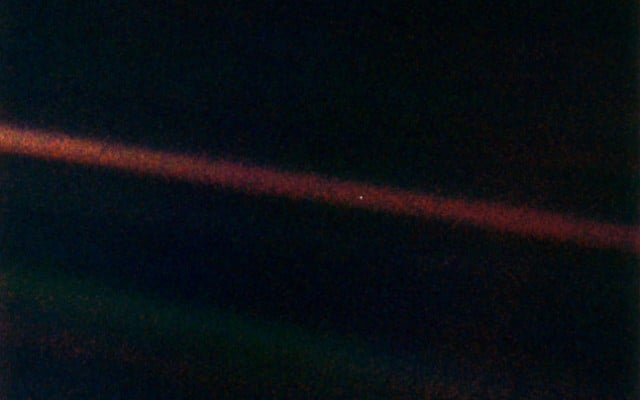 Want to experience it? Look up at that picture. That bright little pinprick of light near the middle? That’s everything you’ve ever known. That’s earth.

Astrophysicists like Neil deGrasse and Carl Sagan are terrifying. They give us theories that challenge those cozy promises of past-lives, heaven, religious solace, and an all-powerful being that we’ve comforted ourselves with, but at the same time, by making our Universe so much bigger, and yeah, by humbling us by calling out our small existence, it doesn’t make life any less meaningful. It makes it something to be cherished and treasured for its brevity and unlikelihood. Life’s too short to worry about someone not snapping you back or not liking your selfie or not getting a job or getting laid off. We’re not here for a long time — if we only had 8 minutes and 20 seconds left, would you worry about it or fill it up and just live?

I won’t try to sum up what the great Sagan said. Instead, read it for yourself, because it’s pretty dang amazing.

Look again at that dot. That’s here. That’s home. That’s us. On it everyone you love, everyone you know, everyone you ever heard of, every human being who ever was, lived out their lives. The aggregate of our joy and suffering, thousands of confident religions, ideologies, and economic doctrines, every hunter and forager, every hero and coward, every creator and destroyer of civilization, every king and peasant, every young couple in love, every mother and father, hopeful child, inventor and explorer, every teacher of morals, every corrupt politician, every “superstar,” every “supreme leader,” every saint and sinner in the history of our species lived there-on a mote of dust suspended in a sunbeam.

The Earth is a very small stage in a vast cosmic arena. Think of the endless cruelties visited by the inhabitants of one corner of this pixel on the scarcely distinguishable inhabitants of some other corner, how frequent their misunderstandings, how eager they are to kill one another, how fervent their hatreds. Think of the rivers of blood spilled by all those generals and emperors so that, in glory and triumph, they could become the momentary masters of a fraction of a dot.

Our posturings, our imagined self-importance, the delusion that we have some privileged position in the Universe, are challenged by this point of pale light. Our planet is a lonely speck in the great enveloping cosmic dark. In our obscurity, in all this vastness, there is no hint that help will come from elsewhere to save us from ourselves…It has been said that astronomy is a humbling and character-building experience. There is perhaps no better demonstration of the folly of human conceits than this distant image of our tiny world. To me, it underscores our responsibility to deal more kindly with one another, and to preserve and cherish the pale blue dot, the only home we’ve ever known.