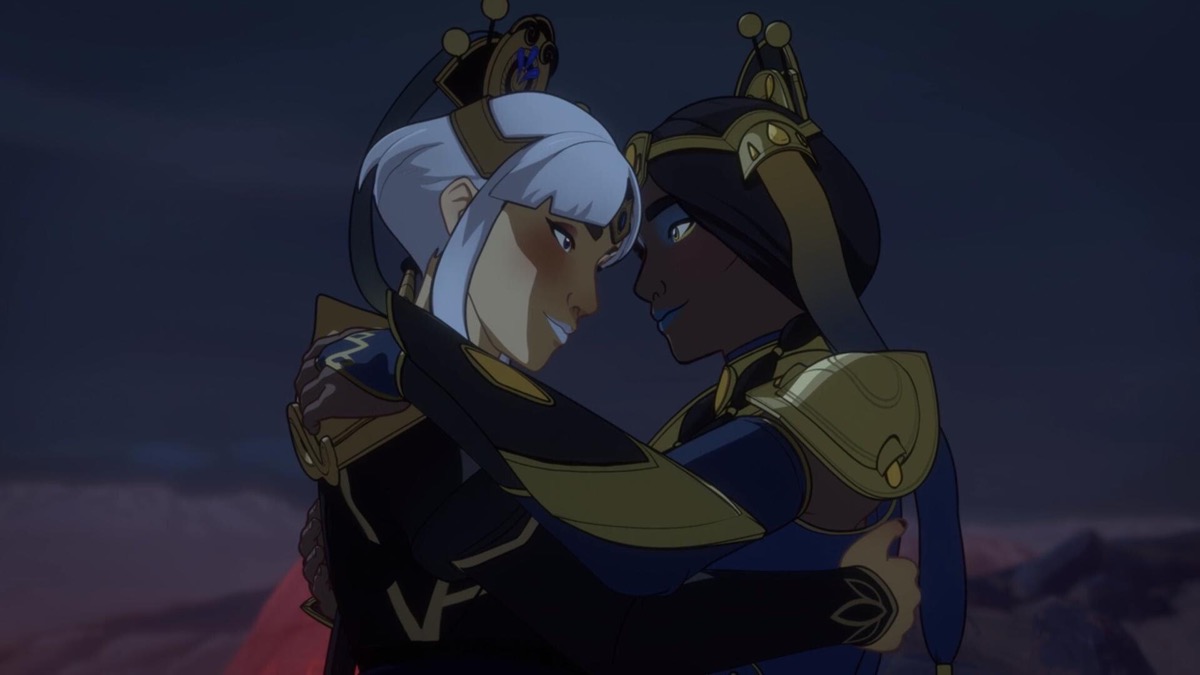 Netflix’s The Dragon Prince has been evolving into one of the most challenging children’s fantasy series of the decade. The promise of the first season, “Book One: Moon,” pays off in season 2’s “Book Two: Sky.” Among the new elements of this excellent second season is a new batch of heroines.

I’ve previously talked about the varied female characters in season one: cool-auntie General Amaya, Rayla the Moonshadow Elf assassin, and the goofy and studious Claudia. Now, season two offers an array of new heroines, some living and some legends: 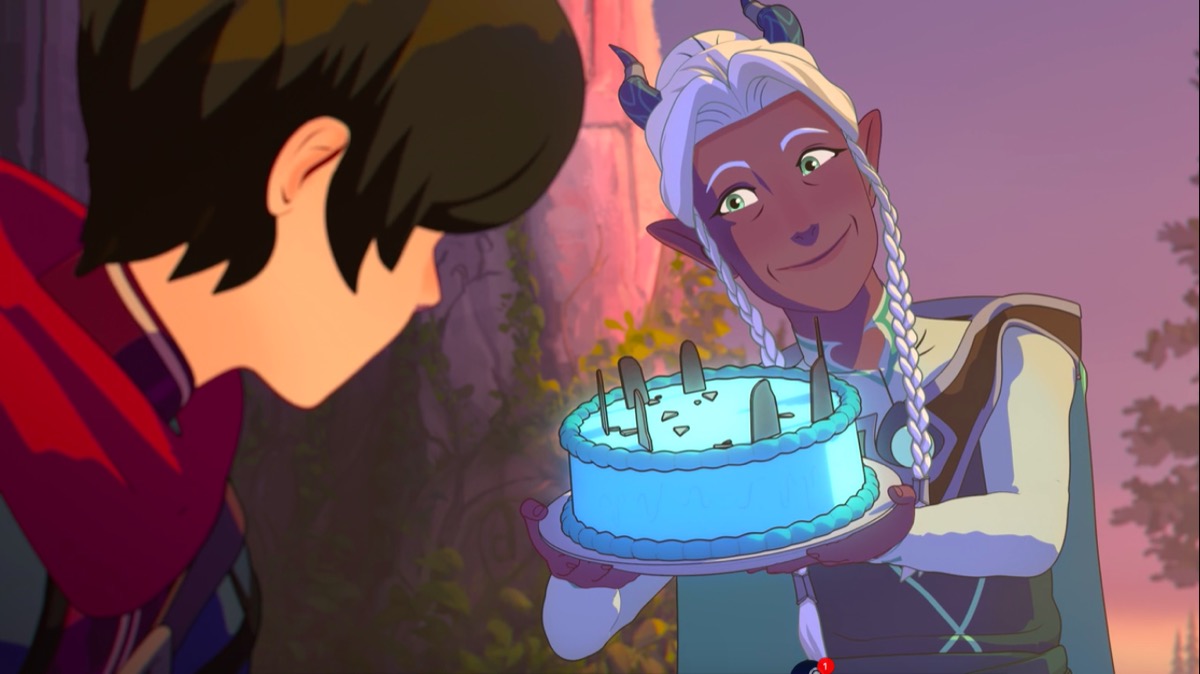 Talk about a Yoda-esque grandma who enjoys trolling her protégés once in a while. As the guardian of an ancient magical site, Lujanne is a master illusionist with a mischievous spirit. She tries a little too hard to play cool grandma, offering worm-grubs disguised as desserts.

She’s also wary that she doesn’t have easy answers. When Rayla comes to her for advice, her lessons avoid absolutes, and she lets Rayla interpret her wisdom however she needs to. (Or maybe she’s just hiding the fact she doesn’t know everything to take credit for the lesson Rayla learns.) She also loves riddles that may be open to interpretation: “Was it just differently true?”

Obi Wan Kenobi’s “from a certain point-of-view,” anyone? I’ll eat her worm-illusions anytime. 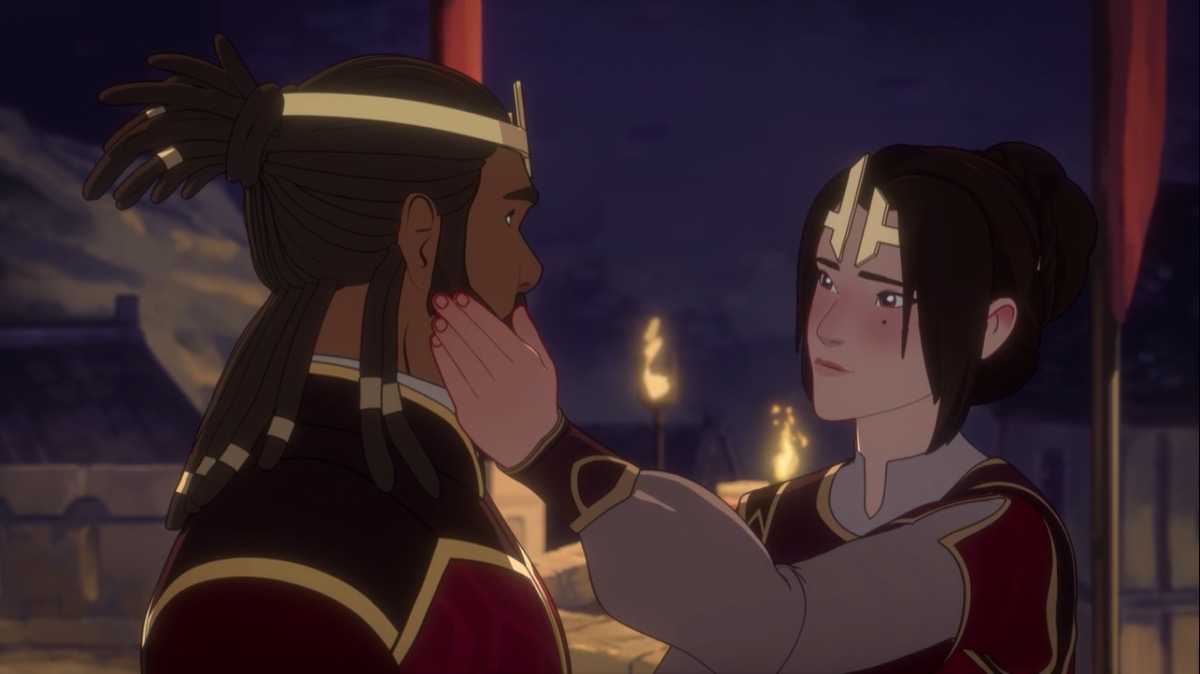 In season one, Queen Sarai was introduced as a memorial statue and a lost loved one, the late mother of Callum and Ezran. In Book Two, she materializes in flashbacks that explore her humorous personality, efforts to save the kingdom she shared with her husband, and the jelly sweet-tooth that Ezran inherited.

One of the highlights of season two is her charged duel and debate with her husband, where she clashes with him on how to save their kingdom. When she has an opinion, she’ll make it known. She’s loyal to her husband-king, but not deferential.

And is it me, or does she seem to have a thing for a disrobed Lady Justice? (You’ll understand when you hear her conversation with her husband.)

The Two Queens of Duren

As their stories are told in a flashback, and we know their young daughter holds a throne, we’re prepared for their demise once we see their faces but take solace in the fact that they’re a legend like Queen Sarai. While their fate fits the problematic pattern of supporting queer characters getting killed off, a.k.a. “bury your gays,” but there are still positive aspects to enjoy.

My personal quibble was not knowing their actual names in the series (I had to find their names, Annika and Neha, from an external source). In their little screen time, there is a fair amount of investment in them as a couple. At the very least, they exercise agency in their sacrifice for their kingdom, and it isn’t for naught. Their legacies are memorialized, not just in legends and statues, but in their wise heir. 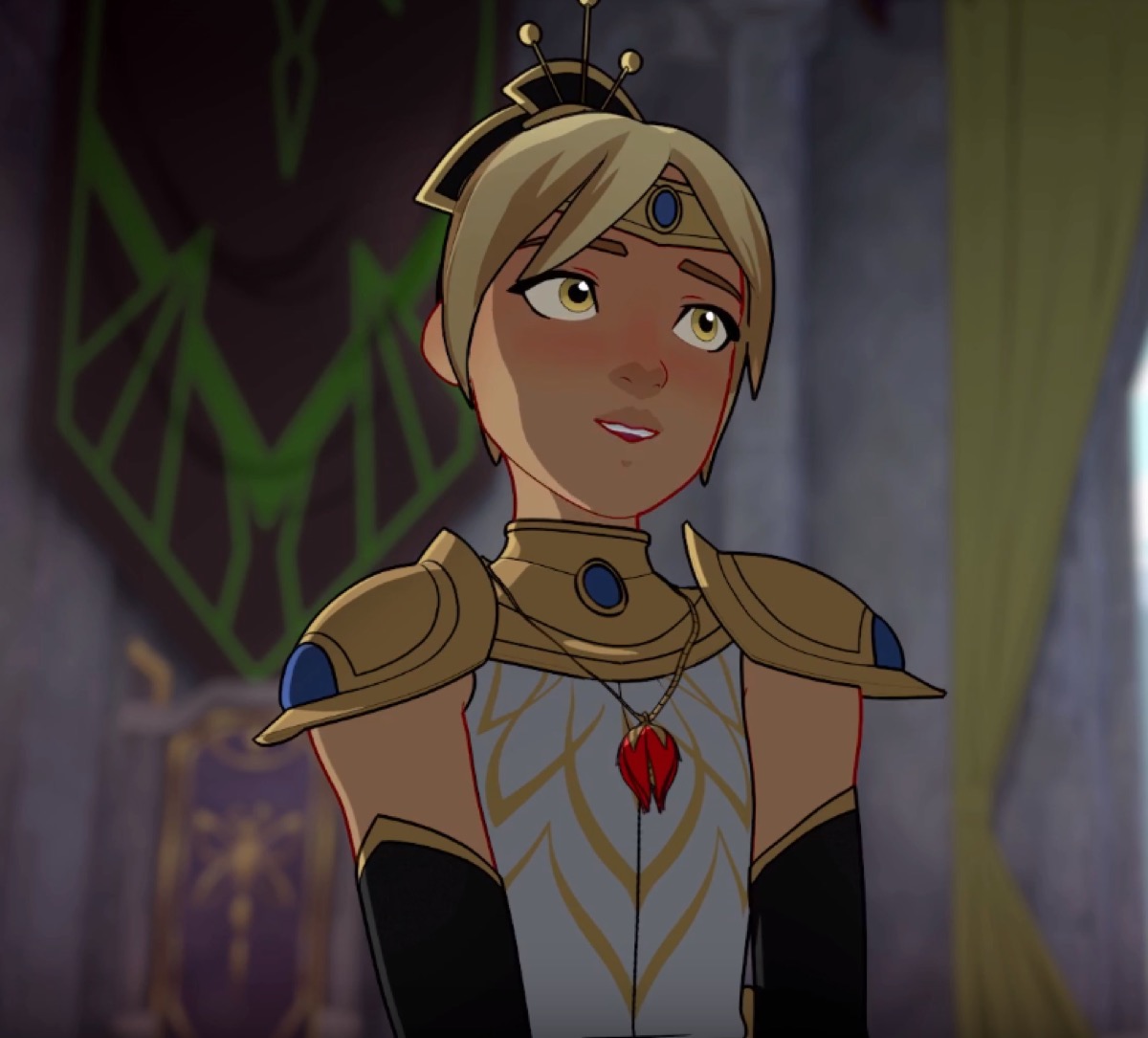 She’s a child on the Duren throne, a queen, and the daughter of two queens. Having survived countless usurping attempts, she drops this pearl of wisdom that speaks to the problems young girls and women have today: “Sweet words can be more dangerous than hidden daggers.”

After all, words that look and sound deceptively positive can be used against women. Aanya boldly displays many colors. Her impeccably formal rhetoric has a touch of playfulness to it—“I hardly call, ‘we’ll do what everyone else does’ a decision.”

She has the tongue of both a child and adult, and both her sageness and child’s perspective shape her royal decisions.

Aanya commits to a crucial decision that puts her late mothers’ fate into examination. She concedes to Lord Viren’s point that her late mothers would run into battle—after all, it was their final action—but to counterpoint her late mothers’ final fatal decision, Aanya chooses to avoid warfare with the magical lands. She reveres her queen mothers while knowing how to forge her own queenhood.

The heroines of The Dragon Prince pursue their own goals and ideals on their own terms. They’re willing to let their doubts and questions have space to breathe. As The Dragon Prince moves on, I look forward to what the series will do with its living heroines. It wouldn’t hurt to have more of them.

While she’s running her own writing and scripting services, she lends her voice to SlashFilm,  Birth Movies Death, Film School Rejects, and The Script Lab. She’s also lurking in the shadows waiting for you to follow her on Twitter or Tumblr and read her Star Wars fanfiction.