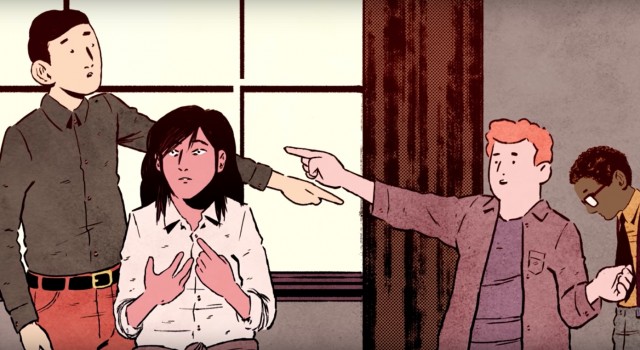 What do you get when you combine 4 tabletop RPG-playing kids, violent criminals, and the secrets parents keep? The answer is 4 Kids Walk into a Bank, the new comic book from writer Matthew Rosenberg and artist Tyler Boss. The crime caper with a dark swipe of humor revolves around four kids: Paige, Pat, Berger, and Walter. If you want a basic snapshot of our gang of four, Paige is the ringleader, Pat is her number 2, Berger is the loudmouth, and Walter is the soft spoken brain. While our group certainly operates as an ensemble, it’s clear from issue #1 that Paige is our fearless leader.

Paige’s strength is reminiscent of Madison from Rosenberg’s sleeper hit of last year, We Can Never Go Home (non-comic book readers may still remember her character for brilliantly skewering female superhero costumes). While 4 Kids doesn’t feature super powers like its predecessor, Paige is still clearly the toughest and most confrontational of the kids and isn’t afraid to take on anyone—hell, even her D&D character has a +5 for bravery. Whether it’s a homophobic bully at school or threats from adult criminals, Paige never cowers.

The descriptions released for the book make it clear that the kids themselves will be involved in a crime at some point, and the first issue starts the setup for that scenario. So far, we don’t have the full picture of what our four heroes will plan, but we can see the edges starting to develop. This first piece of the series introduces a group of less-than-savory men to the kids when they show up at Paige’s house asking for her father. This leads to our four-piece setting up a stakeout to learn more about the threatening criminals. At this point, it seems that Paige’s father has gotten himself into something he can’t get out of, and I have a feeling that we’ll see Paige—with the help of Pat, Berger, and Walter—develop a plan to dig him out of that situation.

Fair warning that this comic about our pre-teen heroes isn’t targeted for that age group—the kids (or at least the no-filter Berger) swear a hot streak and encounter violent situations. In one such scene, Rosenberg demonstrates his work’s self-awareness by using a single panel to comment directly to the reader about the violence at hand. The book’s writing is full of fast-paced dialogue and a darkly humorous slant, and the clean, intentional framing of every panel Boss illustrates gives the story a look that evokes Wes Anderson or Quentin Tarantino. A glimpse of this can be seen in the preview video that Black Mask Studios released.

The pop up boxes of commentary and the multi-panel, back-and-forth conversations (the hilarious 24 panel CB radio conversation is one of the star pages of this issue) provide a unique, cinematic rhythm to the story. My only criticism of the series so far is that Paige is the only female character, though it’s quite possible that Paige being so surrounded by men is a commentary in and of itself.

It’s clear that we don’t know how our characters will end up involved in a crime, but the fun of issue #1 is seeing the first steps towards that endgame. The first issue hits comic shops on April 27, and if the sellout sales of We Can Never Go Home are any indication of Rosenberg’s success, I suggest getting on board with 4 Kids now. The cover of issue #1 lists it as a crime caper in five parts, but I’m hopeful that we’ll be seeing these characters extended beyond a five-issue arc.