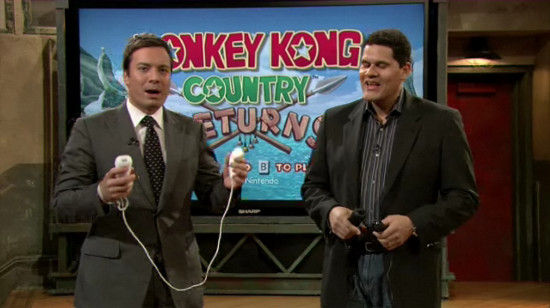 Reggie Fils-Aime, president of Nintendo America, made an appearance on this Friday’s Late Night with Jimmy Fallon to show off Donkey Kong Country Returns and the Nintendo 3DS.  While there he let slip some info on the 3DS’ release schedule, during an interview made a little awkward by the fact that both host and guest were also trying to play their way through a level of Donkey Kong.

Frankly, we don’t think we would have been any more coherent.

When asked when the 3DS was coming out, Fils-Aime replied “It’s coming out next year.”  Its release date can now be narrowed down to a three month period, since Fils-Aime has also confirmed that the 3DS would be out in America by the end of March, 2011.

You can watch the full clip below, and it’s actually not that bad.  Donkey Kong looks very exciting (although in my case that may just have been the song “Jungle Hi-jinks” working its nostalgic magic), and Fallon’s amazement at the 3DS’ capabilities seemed really genuine.