Tatiana Maslany and Her Story Nominated For 2016 Emmys…Oh Yeah, and Other People, Too

Black-ish‘s Anthony Anderson and Gilmore Girls‘ Lauren Graham announced the 2016 Emmy Award Nominations this morning, and you all can rest easy. Tatiana Maslany was totally nominated for her brilliant performance on Orphan Black. Also, Her Story was nominated in the new Outstanding Short Form Drama or Comedy category! Oh yeah, and some other people were nominated, too.

I was able to watch the live announcement (and you can watch the replay HERE), and it was really awesome to watch Anderson be downright giddy over every nomination Black-ish received, including his own! You can check out the full list of nominees HERE, but there are plenty of TMS favorites that were shown some love.

The nominees for Best Drama Series are Better Call Saul, Downton Abbey, Game of Thrones, Homeland, House of Cards, Mr. Robot, and The Americans. With the most nominations this year (23!), Game of Thrones seems to be the show to beat, so fans of the series rejoice! However, I’m really glad that Mr. Robot made the cut, and I’m thrilled that The Americans made the cut. That’s one of those shows that I’d qualify as The Best Show No One is Watching. What’s disappointing is that, even though its leading lady was rightfully nominated, Orphan Black as a show was not, which is a shame considering it’s one of the most engaging, complex, and thought-provoking shows no television right now.

As for Best Comedy, the nominees are Black-ish, Master of None, Modern Family, Silicon Valley, Transparent, Unbreakable Kimmy Schmidt, and Veep. What’s awesome is that of these seven choices, five of them center around either characters of color, or female protagonists (and yes, I’m including Transparent in that, even though Maura is played by a cis male actor), and I really hope that one of those shows wins. If there’s all that diversity in the category, but the award still goes to either the show about mostly-white families, or the show about the mostly-male, mostly-white workplace, I’ll be disappointed. Personally, I’m rooting for Master of None. 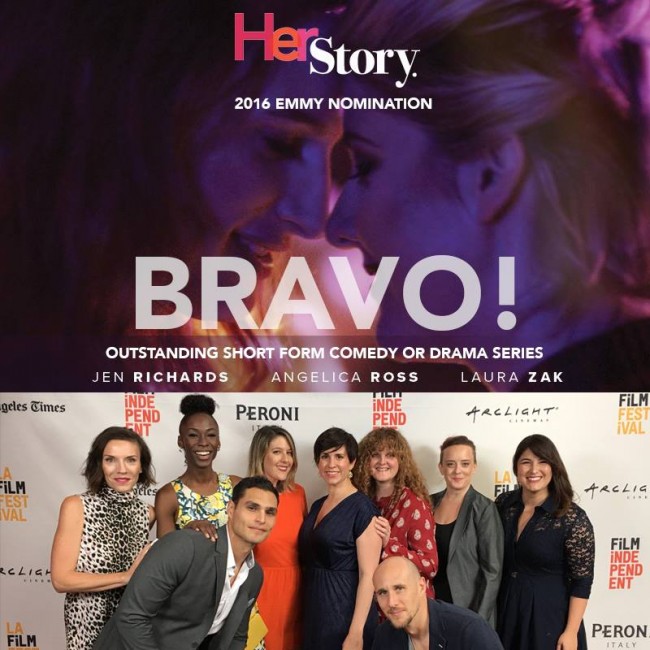 One of the categories I’m the most excited about is the new Outstanding Short Form Drama or Comedy category, which allows an opportunity for shorter digital series to shine. Her Story was nominated in the category, and not only does it provide an excellent bit of trans and queer representation actually created by trans and queer women, but it’s the only show nominated in the category that actually lives exclusively as a short form series online. C’mon Academy!

Joining Tatiana Maslany in the Best Lead Actress in a Dramatic Series category are Viola Davis (How to Get Away With Murder), Taraji P. Henson (Empire), Claire Danes (Homeland), Keri Russell (The Americans), and Robin Wright (House of Cards). Obviously, I’m rooting for Maslany, who’s been unduly shut out the past few years, but this is a difficult category. I watch all these shows, and all these women are brilliant.

In the Best Lead Actress in a Comedy category, we’ve got Ellie Kemper (Unbreakable Kimmy Schmidt), Julia Louis-Dreyfus (Veep), Laurie Metcalf (Getting On), Tracee Ellis-Ross (Black-ish), Amy Schumer (Inside Amy Schumer), and Lily Tomlin (Grace and Frankie). Again, this is a really difficult category, as all these women give phenomenal performances. However, I’m leaning very slightly toward Ellie Kemper. While I wasn’t exactly thrilled with this season of UKS, Kemper’s performance was, and always is, the best thing about it. In lesser hands, Kimmy Schmidt could be all caricature. Kemper keeps her on the right side of being an actual human person, and I don’t think she gets enough credit for that.

Surprising snub in the comedy categories? Crazy Ex-Girlfriend. I’m calling a huge oversight in not nominating one of the most creative and incisive comedies out there right now. Yes it’s a musical, but as anyone who watches the show can tell you, that doesn’t make it fluff. Crazy Ex-Girlfriend delves into issues of feminism, religion/culture, sexuality, and mental health with humor and intelligence. And did Modern Family really need another nomination? Not trying to be a hater, it’s a great show, but it’s a great show that never changes. Then again, I shouldn’t be surprised when organizations like the Television Academy make safe choices a lot of the time. Still, Crazy Ex-Girlfriend got nominated in the music-related categories, so that’s something.

Most fun and awesome nomination? First of all, did you know that there’s an Outstanding Narrator category? Me either. But when I saw that category in the list, best believe I looked for one name in particular, and it was there! Anthony Mendez for Jane the Virgin! He’s totally the unsung hero of that show, and I hope he wins.

Who are your favorites among the nominees this year? Who do you think got wrongfully snubbed? Let’s talk television’s biggest night in the comments below!

(featured image via screencap, Her Story image via the production)