1997 was quite a while ago, but many gamers will remember it as the year that Final Fantasy VII hit the market. However, 1997 was also the year of a lesser-known title, a vehicle shooter named G-Police. Though critics noted that the game suffered from an inconsistent draw distance and poor controls, the game was popular enough to warrant a sequel, G-Police: Weapons of Justice, which released in 1999. Thirteen years later, its countdown timer webpage is still up and running, counting so far down that it has broken through the negatives barrier long, long ago.

At the time of this post, G-Police: Weapons of Justice is negative 115,042 hours, 1 minute, and 35 seconds away from launch, which means that it launched almost 4,800 days ago, or around 13.1 years ago. The site preserves other amusing artifacts from the Internet’s past, such as the preferred viewing options for the site: 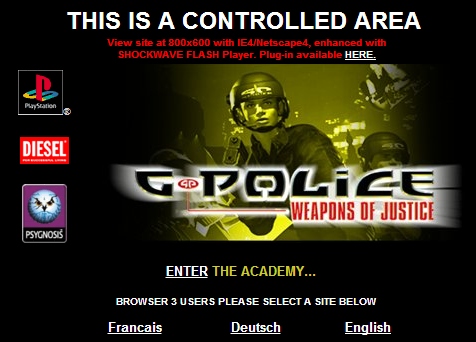 That’s right, the site should be viewed at 800×600 resolution, and is best viewed with Internet Explorer 4 or Netscape 4. Also amusing, if you enter the website, then proceed beyond the countdown, you’ll arrive at an in-theme communications device called the NaviCOM, which explains that it is the only way to navigate the site, and train yourself to prepare for the battles that await you in the game. The NaviCOM allows one to navigate a radar-like object by clicking the bigger blue button toward the top, and it leads to various little extras, like downloadable wallpapers and viewable artwork. It’s fun to see that games from the Wild West days of the Internet which didn’t quite make it through the test of time still went all-out upon release, attempting to provide a companion experience even though something as ancient as Netscape was the optimal way to enjoy it.