12  LGBTQ+ Webcomics Recommendations You Should Be Reading Right Now

The independent medium holds great power to include diverse representation. 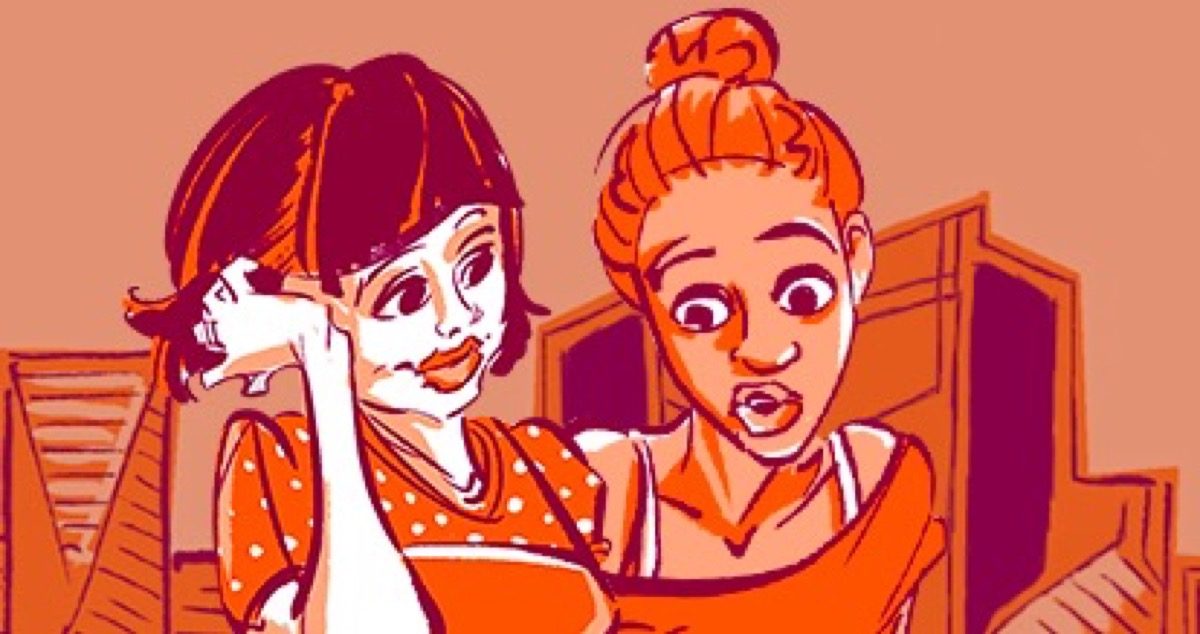 The Web, often known as the center of all things good and evil, has often been a platform on which independent artists may reach new creative heights. Take, for instance, webcomics—digital comics published online or on a mobile app. In recent years, webcomics seem to have risen in popularity, as evidenced by companies such as LINE WEBTOON, a webcomic portal that has partnered with Partreon and DeviantArt, as well as showcased panels at venues like New York Comic Con.

One of the reasons why webcomics seem to be so well-received among creators and readers is the medium’s lack of restrictions, in which creative artists, unrestricted by the demands of corporate companies, may touch upon storylines and themes that would otherwise be censored or regulated in pursuit of profit.

As such, webcomics have been known for making strides in LGBTQ+ representation that mainstream comics have been slower to accomplish, so we’ve collected a list of the ones that might interest you here! Feel free to mention any other noteworthy webcomics in the comments section below. Happy reading!

1. The Less Than Epic Adventures of TJ and Amal by E. K. Weaver 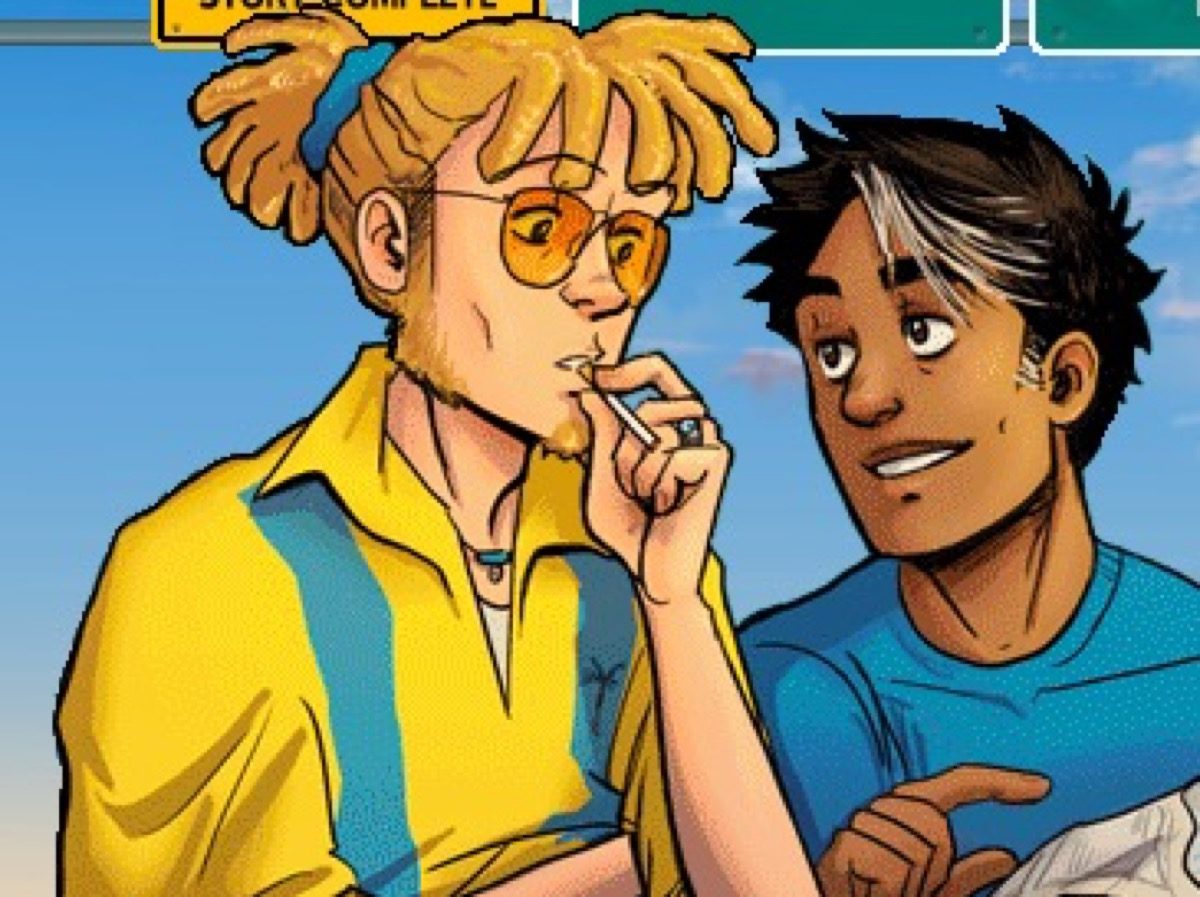 In the span of a single day, Amal calls off his arranged marriage, comes out to his conservative parents, promptly gets disowned, goes on a bender … and wakes up the next morning to find TJ—a lanky, dreadlocked vagrant—frying eggs and singing Paul Simon in his kitchen.

TJ claims that the two have made a drunken pact to drive all the way from Berkeley to Providence. As it happens, Amal promised his sister he’d be there for her graduation from Brown University, and TJ, well … TJ has his own reasons.

The agreement is simple: Amal does the driving; TJ pays the way—but a 3,500 mile journey leaves plenty of time for things to get complicated. 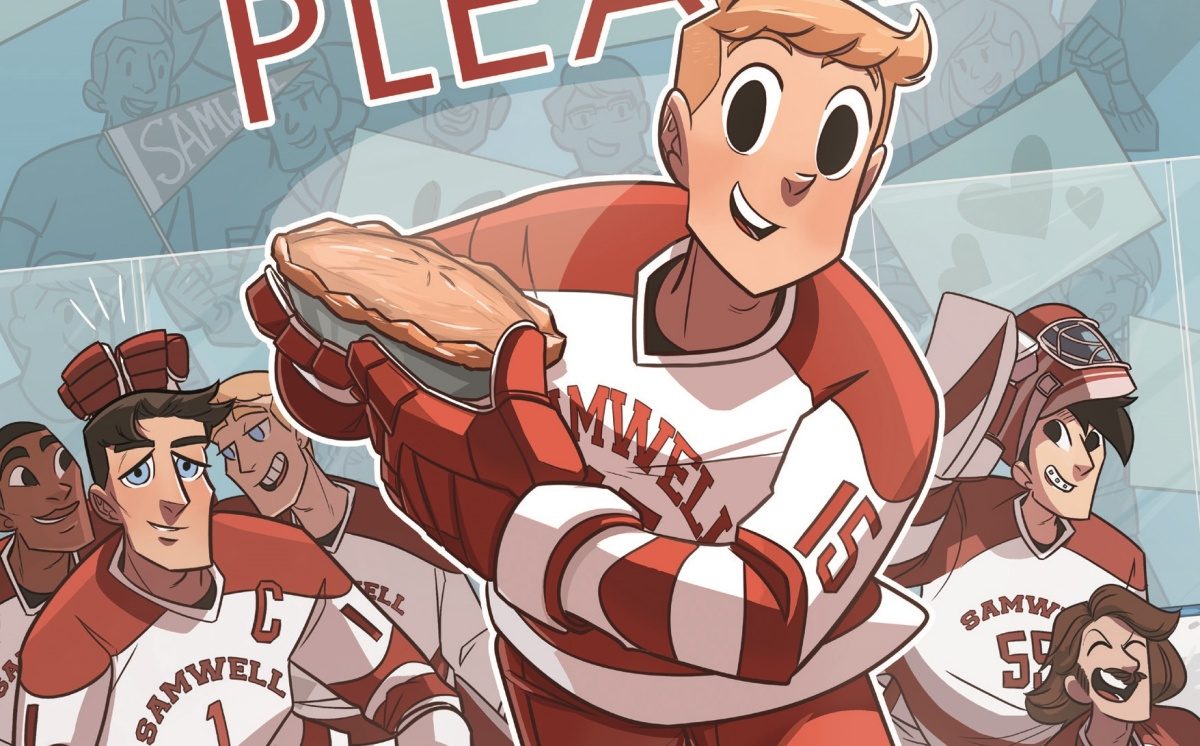 For one? There’s checking.

It’s a story about hockey, friendship, bros, and trying to find yourself during the best 4 years of your life. 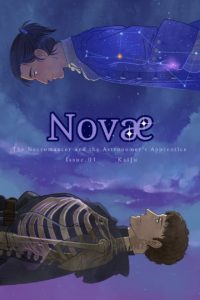 It is 17th century France, the age of discovery and scientific revolution. Sulvain, a mysterious traveler, is absorbed in the Parisian academic scene. Through his friendship with the renowned Christiaan Huygens, Sulvain has the chance to study the latest discoveries of the distant cosmos. Deep in the library of Academy of Sciences, however, our traveler will meet Huygen’s apprentice—Raziol Quamar—who will truly spark new lights in Sulvain’s universe, but as the two grow closer, trouble brews in the city.

This is a story about nanobots, genetic engineering, and two girls falling in love. No matter how technology changes us, we’ll always be human.

5. Shades of A by Tab Kimpton 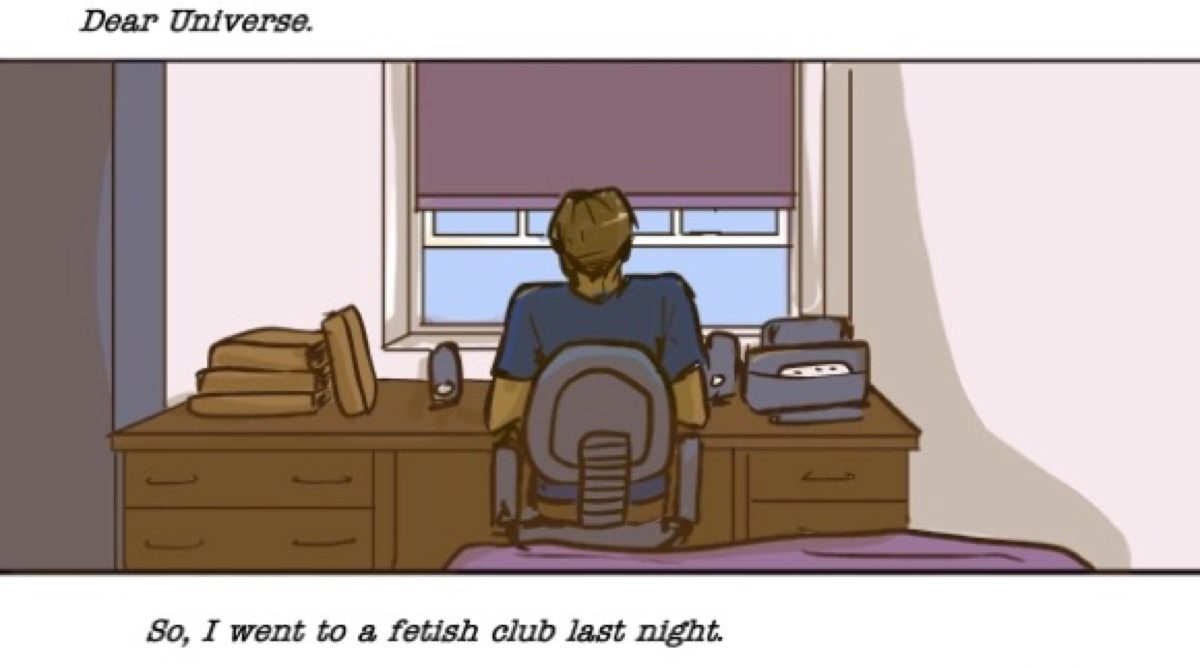 When openly asexual Anwar Sardar gets dragged to a kink night by his (soon to be ex) best mate, JD, he is surprised to make friends with Chris Slate, a middle-aged crossdresser with a penchant for Doctor Who. Convinced they’ll never meet again, Anwar puts him out of his mind, but the awkwardly charming man keeps turning up in his life.

6. Tripping Over You by Suzana Harcum and Owen White 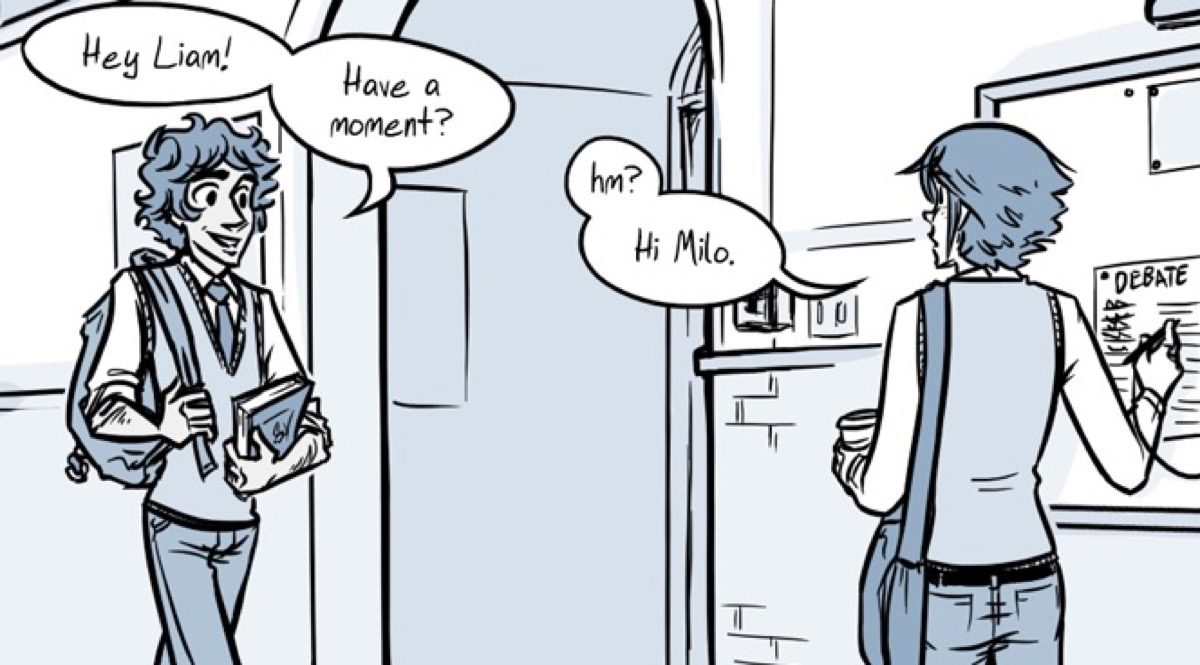 The story follows two young men (Milo and Liam) as they begin a somewhat wobbly high school relationship, then follows them into their young adult lives. They trip over each other, their friends, and their families—though, for the most part, the story aims to stay silly and fun. 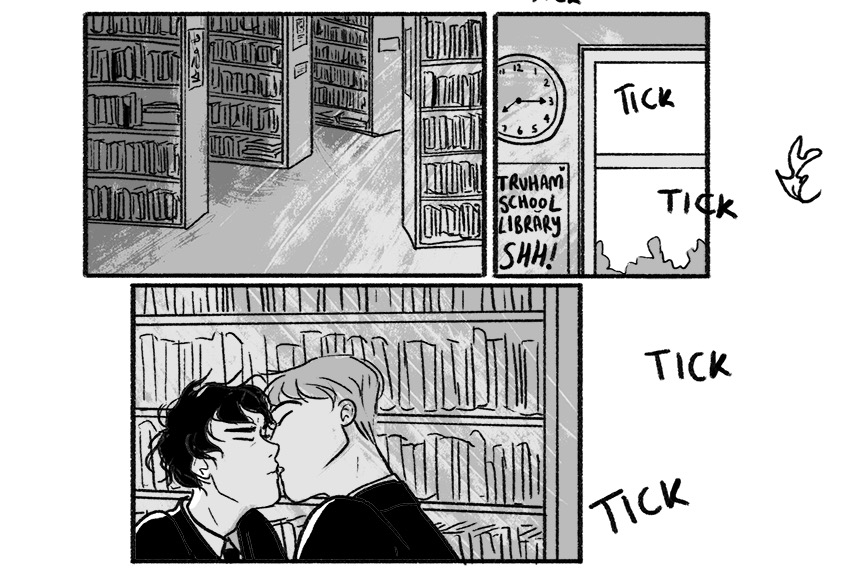 Charlie, a high-strung, openly gay over-thinker, and Nick, a cheerful, soft-hearted rugby player, meet at a British all-boys grammar school. Friendship blooms quickly, but could there be something more … ?

8. Love Not Found by Gina Briggs 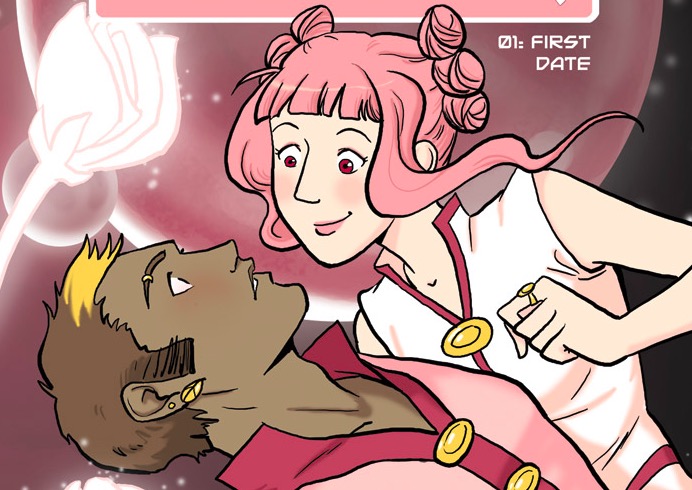 Love Not Found is a story about a young woman living in a time when touching has become outdated. She has recently moved to a new planet and finds that touching might not be such a bad idea. Now she wants to find someone who likes things the old-fashioned way! 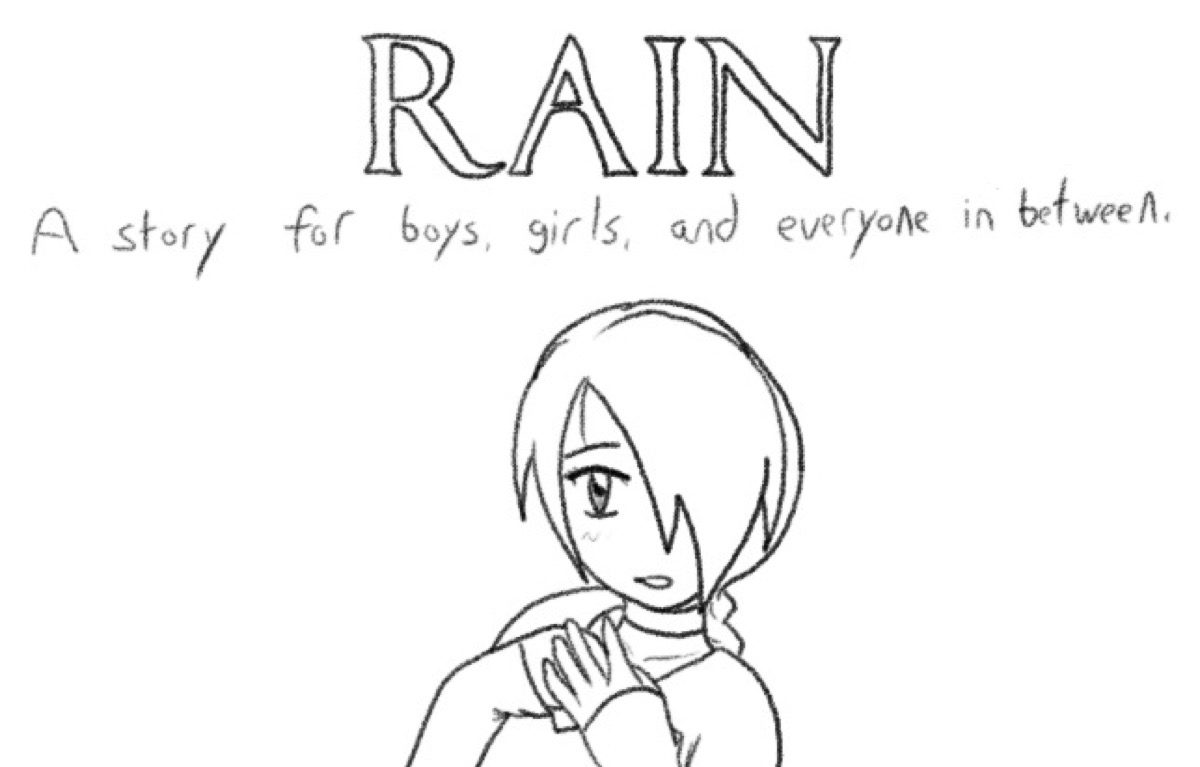 Rain is a slice-of-life/comedy/drama that follows the life of a teenage transgender girl named Rain as she attempts to go through her senior year in high school identifying only as a woman. Along the way, she makes friends with an eclectic bunch of people of varying orientations and gender identities. See their stories filled with silly humor, teenage angst, occasional adult angst, copious amounts of love triangles, mockery of product names, complex relationships, tons and tons of dialogue, and sometimes a cute little bunny. How can you go wrong, right?

10. Rock and Riot by Chelsey Furedi 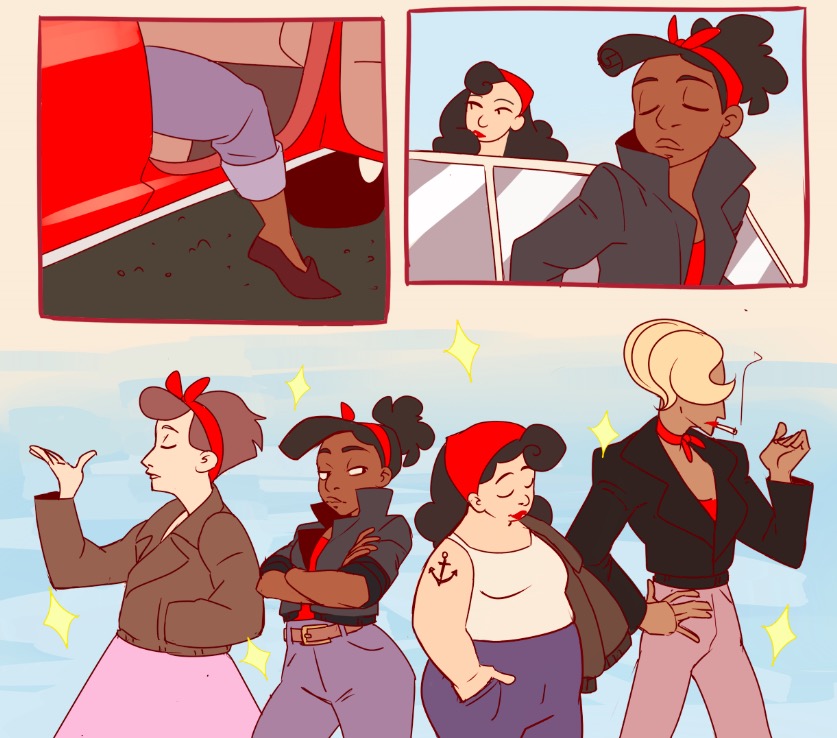 With all the fashion and quirks of the ’50s comes a vintage queer love story that you’ve never heard before. Rock and Riot follows the tales of teenage delinquents learning about gender and sexual orientation while still maintaining their fabulous hair. 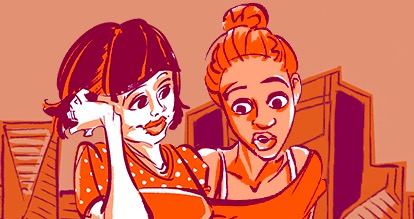 As personal assistant to an international pop star, Meera Verma has her hands full trying to keep the gorgeous and talented Carina Peterson primped, polished, and mostly on time. As personal assistant to a Los Angeles-based masked vigilante, Meera has her hands full repairing body armor, stitching up knife wounds, and generally doing everything in her power to keep the mysterious and reckless Skeleton alive and out of trouble. Carrie’s just trying to make some music and fight some crime. 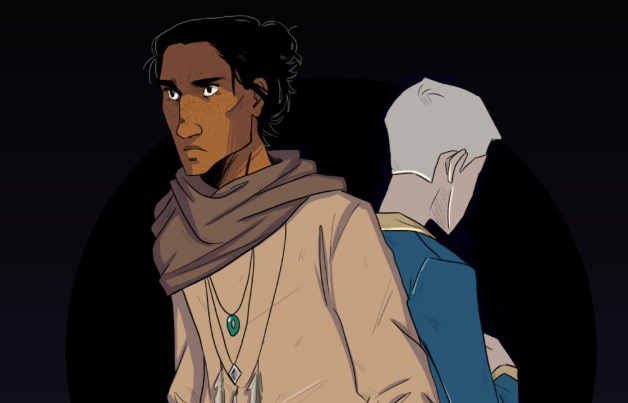 A cursed prince must rely on a witch to free him from an enchantment. But witchcraft is banned, and the two young men have little in common. As love blossoms between them, can they overcome their own prejudices, save their kingdom, and find a cure … before it’s too late?