2022 has been an amazing year for fantasy and science fiction television. Netflix’s Stranger Things dominated entertainment media when season 4 was finally released in May. Disney+ already released Moon Knight, Obi-Wan Kenobi, and Ms. Marvel, and She-Hulk: Attorney at Law and Star Wars’ Andor will be here soon. Our Flag Means Death, The Man Who Fell to Earth, Shining Girls, and The Sandman are lighting up social media feeds, and Amazon Prime Video’s Lord of the Rings: The Rings of Power is about to join them.

It’s no surprise that a new series featuring a mostly unfamiliar cast might be obscured by longer-running franchises or higher-budget productions, but here are 10 ways Amazon Prime Video’s Paper Girls is not only excellent, but also the most underrated TV show of the year:

Paper Girls joins Stranger Things, Pose, and Glow (and technically 14 other series) set in the 1980s. Even the sequel to Wonder Woman was set in 1984, seemingly for no other reason than to stay on-trend with stories set in a pre-Internet era.

Comparisons between Paper Girls and Stranger Things were always inevitable, but Paper Girls’ comic book debut actually predates Stranger Things by nine months. Despite the number of characters seen using a Sony Walkman onscreen, there are more differences than similarities between their narratives.

The primary themes of Paper Girls are death and grief. It also explores the emotional conflict between who we thought we wanted to be when we grew up and who we actually became. It holds a mirror to our senses of self, while also challenging how we engage with our familial elders. Nostalgia for a pop-culture-saturated childhood is not the focus, so ’80s movie posters and throwback fashions are strictly background details.

2. Paper Girls was adapted from the source material by a woman

When the first issue of Paper Girls was published by Image in October 2015, some readers might have been skeptical about a story featuring 12-year-old girls that was written by a man (Brian K. Vaughan) and illustrated by a man (Cliff Chiang). The comics publishing industry is still male-dominated, but readers took a chance on this beautifully designed book with a story that ended up being uniquely and unforgettably good.

Vaughan and Chang did right by their female characters and won our hearts. So, when screenwriter Stephany Folsom (Toy Story 4, Star Wars Resistance) adapted the 30-issue series for television, we knew this story of girls becoming women would be in good hands.

Among the 10 executive producers of Paper Girls and are Brian K. Vaughan and Cliff Chiang, who maintain the mood of their comic throughout all eight episodes. Disappointing adaptations like Percy Jackson & the Olympians or Studio Ghibli’s Earthsea adaptation demonstrate that including the creators of the source material is vital to the adaptation process.

Even as the narrative takes unexpected turns and incorporates new characters, Vaughan and Chang acting as executive producers and writers on every episode maintains the integrity of the comic in a way that would make the American Newspaper Delivery Guild proud.

4. Every episode of Paper Girls was directed by a woman, half of whom are women of color

Georgi Banks-Davies (episodes 1 and 2), describes Paper Girls as “the show I wish I had seen growing up.” Destiny Ekaragha (episodes 3 and 4) is a trailblazer. When she was directing Gone Too Far! in 2012, Sight & Sound Magazine reported that she was only the third Black woman in the U.K. to ever become a director of a feature film. Karen Gaviola (episodes 5 and 6) is a Filipina American director whose extensive credits include Lost (for which she won an NAACP Image Award in 2007), Gotham, Supergirl, and Agents of S.H.I.E.L.D. Mairzee Almas (episodes 7 and 8), whose credits include Locke & Key and The Sandman, definitely knows how to direct comics adaptations. Putting the task of visualizing scripts into the hands of women who understand the girls’ experiences makes every episode that much more resonant.

Although the genre is as expansive as the galaxy we live in, science fiction on television often takes a utilitarian approach to camera angles, composition, and lighting. But cinematography is more than just capturing performances on film. In the most memorable cinematography, the camera becomes a character unto itself, a character that acts as a viewfinder for the audience, to help us see the emotional truths of the narrative.

Paper Girls achieves this in subtle and beautiful ways, thanks to Zack Galler in episodes 1, 2, 5, and 6 and Tarin Anderson (hell yes, women cinematographers) in episodes 3, 4, 7, and 8.

6. Paper Girls celebrates women being interested in cinema, science, and other male-dominated fields

From Tiffany’s aspiration to attend MIT to KJ’s future girlfriend describing her love of filmmaking, Paper Girls consistently features girls and women who aspire beyond societal expectations. This may not be the first time female characters on TV have been shown breaking through the barriers of patriarchy, but in this series, those breakthroughs are presented so effortlessly that it might make audiences momentarily forget that there are still barriers out there in real life.

In an emotionally volatile scene in episode 2, Erin (Riley Lai Nelet) blurts out some Mandarin while arguing with her older self (Ali Wong). Her older self replies. The other girls are present and can hear the Erins clearly. Their dialogue is not subtitled, though, an elegant way of calling attention to the intimacy of their exchange. Younger Erin is frustrated with what she sees as a lack of ambition in her older self. Older Erin is exasperated that her younger self expects so much.

8. Paper Girls holds space for its female characters to talk openly about their periods

In the comic, KJ gets her period first, while wandering through a jungle with Mac in 11706 BCE. On television, Erin gets her period first. She asks Mac to help her acquire some sanitary products from a convenience store, and the scene unfolds like an awkward origami. Erin examines the stolen tampons and tries to wrap her mind around how they could possibly function. Screenwriter Kai Yu Wu‘s dialogue is honest and tender and hilarious.

Even considering everything else that happens in episode 5 (a robot battle, the arrival of Grand Father and Prioress), this scene is the zenith of its character development. It normalizes menstruation, celebrates friendship during times of change, and laughs in the face of the unknown.

9. It examines the experience of coming out to yourself

KJ and her future girlfriend Lauren (Maren Lord) have an unexpectedly poignant exchange in episode 6, when they speak in code about how a person really knows what their sexual orientation is. Using their shared love of cinema (they just saw 2001: A Space Odyssey at a film festival), Lauren tells her that “it can be overwhelming, but every person’s journey is different.” Continuing their improvised analogy, she says that when you find a “movie” (code for “person of the same sex”) that you connect with and it feels “really, really, really, really, really great,” you should listen to that feeling.

Many coming out stories involve coming out to family and friends. But coming out to ourselves is the first—and sometimes the most daunting—step on our personal journeys. Fina Strazza‘s performance in this scene is phenomenal, but examining such a deeply personal experience in the first place is a standout moment in the series.

10. It allows characters to embarrass themselves by saying inappropriate things

There are moments in Paper Girls reminiscent of the most cringeworthy scenes in PEN15, in which otherwise sympathetic characters say things that are not only “politically incorrect,” but straight up unfunny. This is a rare form of emotional honesty in fiction because it acknowledges that even characters who are likable and relatable are still people, and people sometimes say hurtful things, sometimes without even realizing it.

When Mac repeats anti-Japanese sentiments that she probably heard from the white adults in her life, audiences are offered some period-specific verisimilitude. Anti-Japanese sentiment was rampant in the US in the 1980s and affected everything from imports of electronics developed by Japanese companies to translations of manga and anime. KJ calls out Mac’s racism and challenges why she’s even saying such things.

Moments like these give characters space to be flawed, like any 12-year-old might be, like any adult might be. Mac was challenged by someone who loves her and wants her to be a better person. In real life, no one is born with multicultural awareness or sensitivity to cultural differences. We all have to learn that kind of empathy, and we continue to learn it throughout our lives. And it’s awesome to see it happen onscreen. 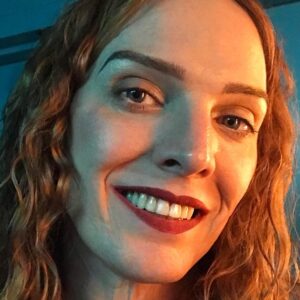 Aria Baci is a pop culture journalist and comic book script writer who is as passionate about intersectional feminism as she is about science fiction. Her writing has appeared in Design*Sponge, Geeks OUT, and the Mine! comics anthology.