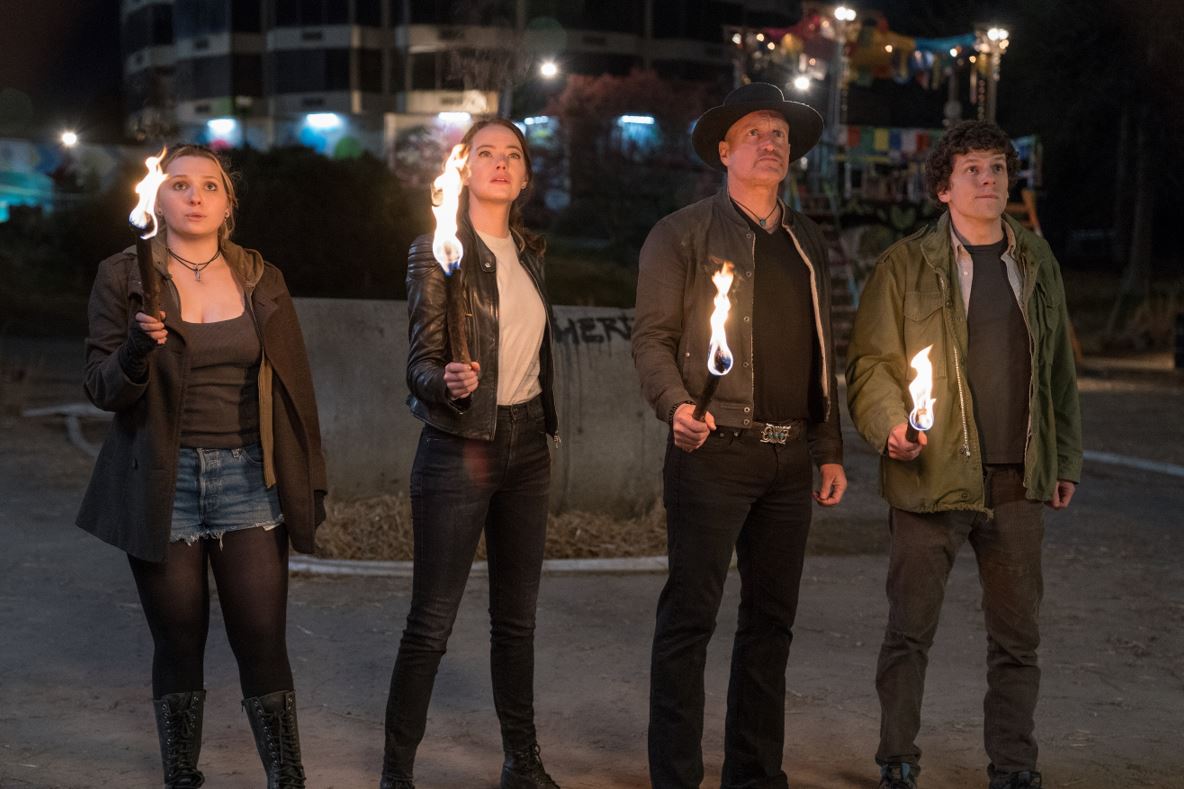 **Slight spoilers for Zombieland: Double Tap, so beware the bolts ahead!**

Fans of the 2009 movie Zombieland are probably asking themselves one question: Really? A sequel? Ten years later? But alas, it is worth the wait and a fun time, so we can’t judge the creative team too harshly. Smack-dab back in the heart of Zombieland, we see Wichita (Emma Stone), Little Rock (Abigail Breslin), Tallahassee (Woody Harrelson), and Columbus (Jesse Eisenberg) back in action, but not everything is as it seems.

When Columbus asks Wichita to marry him, she panics, and right at a perfect time, because Little Rock (who is no longer just the kid sister to Wichita) is getting fed up with having to stay at home with her family and wants to flee. So, the two leave the men behind only to discover something terrible happening to the zombies of the world. The movie opens up with the explanation that zombies are evolving, becoming more of an apex predator than what we had seen in the first film.

I will say that the best part of the movie comes at the hands of Luke Wilson and Thomas Middleditch. Albuquerque (Wilson) and Flagstaff (Middleditch) are, basically, exact copies of Tallahassee and Columbus. A cowboy with his sidekick who loves following rules, they get in a battle when Albuquerque and Flagstaff refuse to ask for help fighting against a new type of zombie—one that Columbus has named a “T-800” because of the Terminator movies, but Flagstaff calls “Bolt” because they’re fast like Usain Bolt.

Through their zombie fight, both Flagstaff and Albuquerque get bitten, and then Columbus and Tallahassee must kill their doppelgangers in order to survive. Otherwise, the movie is pretty much jokes from 2009 (because the world did get taken over by zombies then in the movie’s universe) and looking at these characters and their desires to live normal lives within the zombie apocalypse.

With a new “friend” in Madison (Zoey Deutch), our core four is constantly tested, and it often feels as if they won’t all make it out alive. Taking us on a journey of zombie battles, getting Little Rock back from falling in “love” with a pacifist musician named Berkley (Avan Jogia), and Tallahassee finally getting to find his match, Zombieland: Double Tap is more of the same, but in a more modern way. So, honestly, a fun hour and thirty-nine minutes.

It’s a fun movie for the Halloween season and reminds us why Zombieland is that movie that we all go, “Oh yeah, I loved that movie back in 2009!” so why not go and see a group of Oscar-nominated actors take on the living dead? Make sure to stay through the credits, though, for maybe the greatest post-credits scene to ever exist, and truly, what if we just made another Zombieland movie for that story?