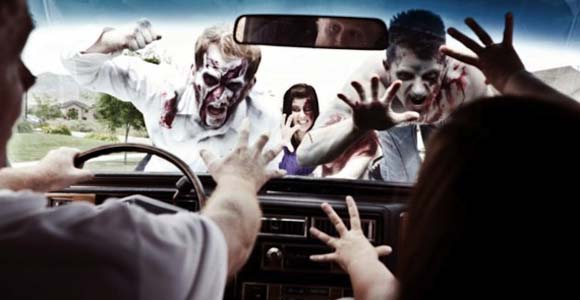 We’ve all seen some obvious product placement in movies and on television and AMC’s The Walking Dead is no exception. You may remember the survivors making a little too big a deal over their Hyundai Tuscon in Season 2 (AMC later went on to give that car away in a sweepstakes) but when you’ve got a good thing going you should stick with it. That why TWD creator Robert Kikman has teamed with Hyundai to create a zombie-proof car in honor of the 100th issue of the Image comic book.

Kirkman’s Skybound imprint and Hyundai present the Elentra GT Coupe sweepstakes. “I don’t know a lot about cars,” said Kirkman in a promotional video, “but I do know a lot about zombie apocalypse and what I would like to have to survive. And so I think I’ll be able to come up with something that looks cool but may not be very practical or effective because I’m not good with physics and stuff like that. But it seemed like a fun challenge.”

In The Walking Dead comic, Kirkman devised a modified Hyundai for zombie-avoiding purposes. Here’s what it looks like. 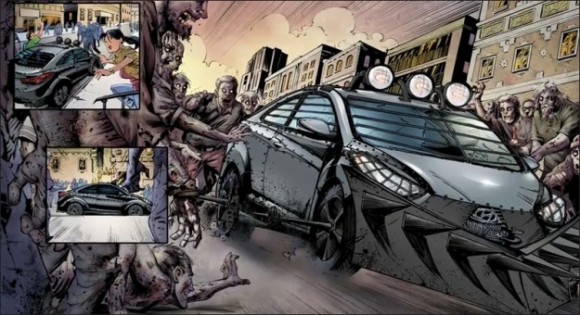 Kirkman said that most important aspect of the car is the mobility, and apparently the car is pretty fuel efficient in real life, but I can’t help but wonder, wouldn’t a hybrid be a lot more beneficial in a gas-lite apocalyptic world?

You may remember we recently brought you the story about how you can take part in the Walking Dead zombie escape route at San Diego Comic-Con this year, well, the zombie-proof car will also be on display at the convention at the Hyundai Undead booth.

The sweepstakes ends July 31 and the grand prize winner gets a 2013 Hyundai Elantra GT. Take a look at what else Kirkman had to say about it: