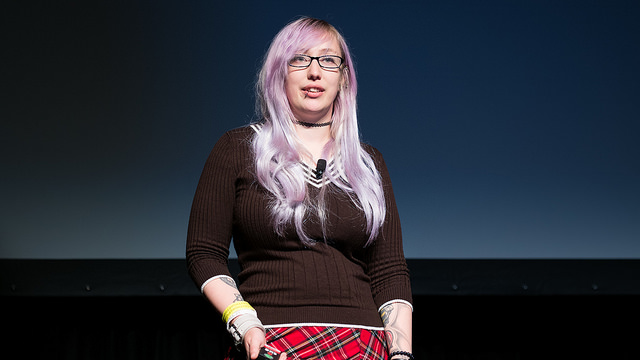 It’s been a year and a half since the flashpoint event that started the abusive, many-headed Internet monster known as Gamergate – Zoe Quinn’s abusive and vindictive ex-boyfriend writing a 9,000+-word post about her specifically designed to resonate with gamers with a history of harrassing women, which spun into the insinuation that her relationship with a video game journalist was some kind of breach of “ethics in journalism” (despite the fact that said journalist never reviewed her game, Depression Quest, and had only ever written about Quinn once before they began their relationship).  It’s been a year and a half of constant misogynist abuse – from people she knows and people she doesn’t know – and Zoe Quinn is tired.

Yesterday, Quinn posted an unedited essay on her Tumblr explaining why she has decided to drop her charges against her obsessive ex, citing her own exhaustion, a system designed to punish rather than protect, and the fact that the legal battle had given her ex yet another tool with which to inflict abuse as reasons for doing so. You should read the entire post, but here are some highlights.

On the moment she made the decision to walk away from this case:

It was a reddit thread that showed up in my Google Alerts for my name, that I had set up to help grow my indie dev business before all this started like so many people in my industry. The title was “if eron goes to jail, I will hunt zoe quinn down and rape her”. Alerts and direct contact like this, specifically discussing the court case, was only escalating and becoming more common. I’m used to things like this at this point, but it doesn’t mean it doesn’t effect me. It doesn’t mean it doesn’t effect anyone close to me who becomes collateral damage in this sick crusade my ex started against me. The continual escalation only ever increases the chances that someone will make good on something like this. Trying to get the law to protect me has only continually put me in harm’s way.

Why, then, would I ever want to sign up for more years of my life spent flying back to Boston, a place where it’s not safe for me to be, to continue another chapter in this nightmare? Why would I want to keep digging at a giant scar?

On the “Good Victim:”

When you seek charges, you’re on trial as much as the other person, if not more. The “asking for it” defense is alive and well even in 2016, and you have to be a “good victim” in order to give your case the best shot it has. “Good victim”, when it comes to women in domestic or gendered violence cases like mine, tends to mean a lot of loaded, even conflicting things. The courts do not favor a lot of women simply for being who they are – women of color, trans women, sex workers, I could go on. Even beyond that, you have to be well behaved and silent about the proceedings, or risk pissing off the judge and giving the defense attorneys ammo to work with. Even my Cracked article was waved around in court by my ex’s lawyers, citing it as “the most disgusting thing that happened during GamerGate” despite my almost one foot stack of threats and photos of me that people had printed out, jizzed on, and sent to my family. The defense, so far, had hung a hat on trying to prove I deserved all of this.

I have been open about my depression and my history in sex work. I have not gone out of the public eye during all of the abuse, and I don’t regret that. I believe in standing up for sex workers and people living with mental health concerns and anyone else I can, and I don’t know what would have happened if I had kept my mouth shut when I was targeted two years ago. But this comes with a cost – everything I have said and done will be held against me and spun by my abuser. The cost of being who I am in defiance of the abuse was sacrificing being a good victim.

On countering the poor advice that if you’re being abused, “all” you have to do is “go to the police:”

You probably know that judges and juries can be biased and hold backward views and assumptions, given that you’re a human in 2016 reading this blog and have probably seen at least one news story about a cop getting away with murdering an unarmed black citizen without so much as a trial. You may have seen it in any reporting on how unlikely it is for rape survivors to see justice combined with how backward everyone is about talking about it. This is at least partly because the US has a very specific idea of who is worth protecting, doubly so when the person in question is being victimized while marginalized.

I’m tired of watching people hand out “just go to the police they’ll protect you” while I silently scream and bite my tongue, because I know the advice-giver is giving horrible, ignorant advice. It’s so much more complicated than that, and if someone decides to go to the cops about their abuser they should be doing it with a more informed and prepared plan than I ever did.

It’s too bad that it had to end this way, and that her ex will likely see this as a “victory.” However, it’s also a mark of strength that Quinn is doing what’s best for her, rather than becoming a slave to this poorly executed legal case that’s seemingly designed for her to fail no matter what she does. But you can’t lose a game you don’t play. You also can’t win a game someone has quit. Perhaps, this is the best move, as part of what abusers get out of their abuse is being able to watch their victim suffer. Quinn is taking that possibility away.

We here at TMS support Quinn in doing what’s right for her, and we hope that she continues to heal and move past all this. We’re behind you, Zoe.