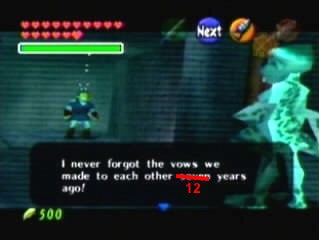 The central tenet of good game design is ‘Don’t make it tedious,’ and on that score, the Water Temple from 1998’s Legend of Zelda: Ocarina of Time was not a success. Last year, Ocarina director Eiji Aonuma personally apologized to gamers everywhere for the level, which required the player to put on and take off heavy boots a seemingly endless number of times to raise and lower water levels and flip lots of switches. “I am most sorry that it was not easy for you to put on and take off the heavy boots, that all the time you had to visit the inventory. I am very sorry about that. I should have made it much easier to switch to the heavy boots,” he said in a 2009 interview.

Now, Nintendo is correcting history: During a roundtable at E3, Aonuma said he felt “evil shame” over the design of the Water Temple, and vowed to make it better in the 3DS remake of Zelda: Ocarina of Time.

You’ve all played the Water Temple? … How many people thought, boy that was really tough? I’ve lived with that for the last ten odd years.

But with Nintendo 3DS we have touch screen. One of the things I think was problematic or maybe troublesome for you when you were playing through the Water Temple was the fact that you had to take the iron boots off, put them back on, take them off, put them back on. The controls for doing it were very hard. What I’d like to do is lay this evil shame I have to rest by implementing the touch screen in such a way that it makes it very natural and smooth and easy to put those iron boots on and take them off.

Some have ragged on Nintendo at E3 for sticking with tried-and-true gaming series rather than launching anything new, but the attention to detail with which they stick to those old titles shows that they’re doing more than just milking a cash cow. Also: Epic Mickey.